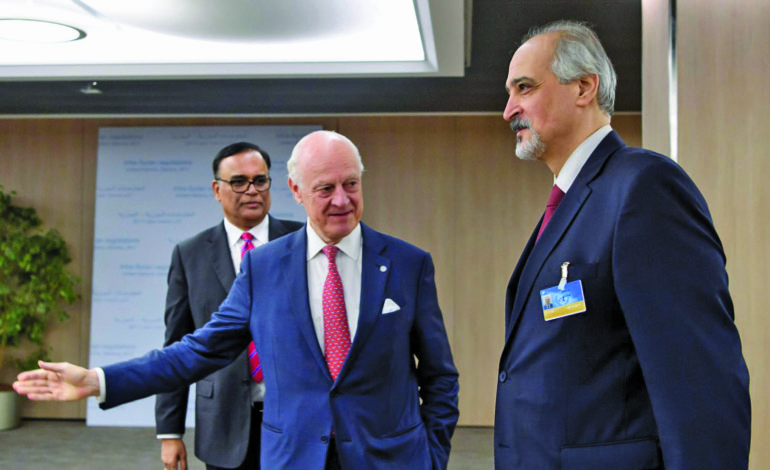 GENEVA — The Syrian government delegation arrived in Geneva on Wednesday to participate in another round of U.N.-sponsored peace talks to bring an end to the Syrian Civil War, now in its seventh year.

All the previous rounds of U.N.-backed peace talks have failed to reach a peace deal, and have often been seriously hindered by the fundamental difference the regime and its opposition have regarding the fate of Syria’s president, Bashar al-Assad. The Syrian government delegation insists he must stay, and the opposition insists he must leave as a precondition for a peace deal.

Most likely this round of negotiations is also destined to fail, the differences are why this meeting in Geneva will mark the shifting landscape of the Syrian Civil War, with Assad solidifying his position as the undisputed head of Syria.

But, with the help of Iran, Russia and Turkey both militarily and diplomatically, the momentum of the war has been shifting in favor of President Assad in the last few months. That is perhaps why it doesn’t make any sense at this time for Assad to engage in the peace talks with the opposition, which would certainly force him one way or the other to relinquish parts of his power. It will be better for him to wait out the peace talks as his forces regains more control over Syria. In addition to that, the Syrian government, represented by Assad, Iran, Russia and Turkey, has been engaged in parallel talks in Astana with further meeting planned in Sochi to formulate ways to unify Syria under Assad leadership and bring an end to the war. These ongoing negotiations are held without the U.N. involvement and are not consistent with the declared objectives of the U.N-sponsored peace talks that were previously held in Geneva, since they are firmly based on unseating any opposition footholds in the country.

The Syrian Civil War began in 2011 during the wave of the so called “Arab Spring” protests that spread throughout the Middle East and North Africa.

More than 350,000 people have died and 12 million more Syrians are displaced in one of the worst humanitarian crises since World War II. The United Nations has repeatedly tried to facilitate peace talks between the warring sides to no avail.

By 2015, the war seemed to be at a stalemate, with both government forces loyal to Assad and the countless opposition groups unable to score any major victories.

However, after the introduction of the Russian troops and airpower to the battlefield, Assad loyalists and their allies were able to fully capture Aleppo, Syria’s most populous city, before the war began. From then on, opposition groups, including ISIS militants, have steadily lost ground.

With Iranian elite advisors and Hezbollah forces as powerful and dedicated allies to Assad’s own soldiers and state-backed militias, Assad now stands much more to gain on the battlefield than in the conference halls in Geneva.

Although Assad’s opposition has appointed a single negotiator to represent them, a first since U.N.-backed talks began, it does little to change the geopolitical realities on the ground that the opposition is fragmented beyond the point of being able to genuinely contest the Syrian leader power.

Before this round of talks began, Assad, Putin, Rouhani and Erdogan met several times in Astana, Kazakhstan, not all parties at the same time, and agreed upon a separate deal within Syria to establish “de-escalation zones.”

Another series of peace talks are scheduled for January in Sochi, Russia. The only hold-up is the inclusion of Kurdish representatives, which Turkey has blocked. These talks would aim to establish a “Syrian People’s Congress”, a conglomerate of Syrian interests to negotiate a post-war Syrian landscape.

Like the Astana agreements, these talks are taking place outside of the auspices of the U.N.

It seems that Assad and his allies have effectively replaced the role of what the United Nations is supposed to be, the diplomatic brokers of Syria’s future. While Assad appears to have won the war on the battlefield, most likely he won’t fail on the diplomatic front.