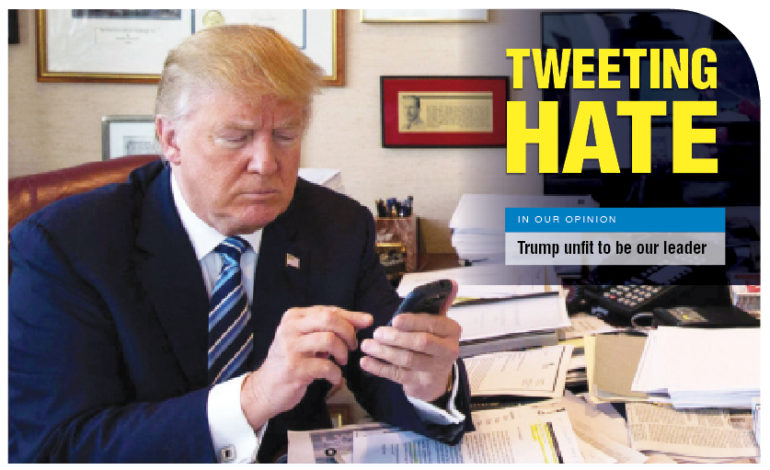 This week, President Trump proved once again, in perhaps the strongest terms to date, that he is unfit to be our leader. The president re-tweeted three misleading anti-Muslim videos, causing a major firestorm in the media. The videos were first tweeted by Jayda Fransen, the deputy leader of an anti-Islam British party named “Britain First.” Last year, Fransen was convicted of “religiously aggravated harassment” after verbally abusing a Muslim woman wearing a hijab.

Trump first shared a video named “Muslim migrant beats up Dutch boy on crutches!” Shortly after, he shared another clip that claimed to show a Muslim destroying a statue of the Virgin Mary in Syria. He then re-tweeted a third video, titled “Islamist mob pushes teenage boy off roof and beats him to death!”

Sadly, the videos re-tweets is nothing new. Trump has publicly and repeatedly stated, “Islam hates us.” He is still, after numerous court defeats, pushing for his travel ban targeting Arabs and Muslims. And now, these tweets. Our president is simply a bigot.

As it turns out, unsurprisingly, the videos are either untrue or devoid of any context. The video concerning the statue of the Virgin Mary featured a fighter from Jebhat al-Nusra in Syria, a man who has been denounced by Muslim groups. He famously engages in destroying what he views as “idols,” for both Christians and Muslims. He is not representative of mainstream Islam in anyway. In fact, right here in Dearborn, the Virgin Mary is revered in Islamic households, prayer services and sacred texts. Many Muslims will even decorate their homes with Christmas trees during this holiday season.

The video that purports to show a teen being pushed to his death by an “Islamist” mob is similarly absent of context. That video was shot during the 2013 unrest in Egypt after Mohammed Morsi was deposed by a military coup. The victim was in fact killed by a supporter of the new president, Abdel Fattah El-Sisi, who is famously anti-Islamist. Moreover, the murderer was arrested, tried and executed for his horrible crime.

Finally, the video claiming to show a Muslim migrant beating up a Dutch boy on crutches is what President Trump himself would call “fake news.” Dutch police have made it quite clear that both boys were born and raised in the Netherlands. Neither is a migrant. Further, the aggressor was arrested, tried and convicted in the juvenile justice system in Holland.

These re-tweets by President Trump are wildly irresponsible. Such actions are bigoted, reckless and highly inflammatory. When such actions come from an average person, they are despicable. When they come from the president, they can be seen as a call to action. We should not be surprised if someone heeds Mr. Trump’s call to attack Muslims right here in America. What he is provoking is plainly dangerous and un-American. He lumps all Muslims together, condemning 1.8 billion people worldwide and close to a half a million right here in Metro Detroit.

Sadly, this is nothing new. Trump has publicly and repeatedly stated, “Islam hates us.” He is still, after numerous court defeats, pushing for his travel ban targeting Arabs and Muslims. And now, these tweets. Our president is simply a bigot. We join Michigan’s U.S. senators, Debbie Stabenow and Gary Peters, as well as other national and world leaders, in condemning his disgusting behavior.