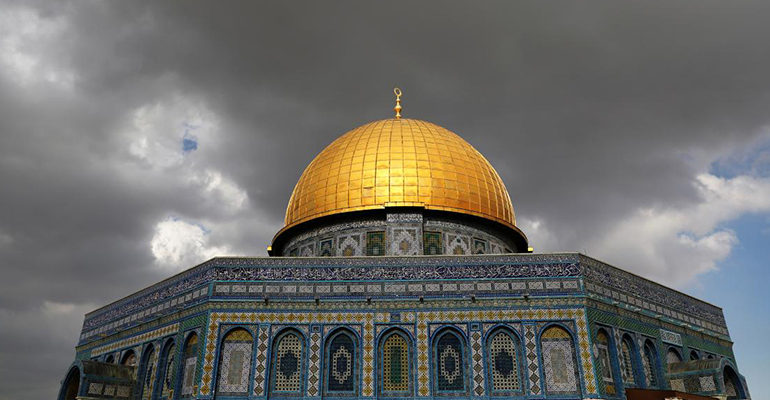 Clouds gather over the Dome of the Rock, located on the compound known to Muslims as Noble Sanctuary and Jews as Temple Mount, in Jerusalem's Old City November 6, 2017. REUTERS

WASHINGTON – President Trump has not yet made a decision on whether to formally recognize Jerusalem as Israel’s capital, his adviser and son-in-law Jared Kushner said on Sunday, a move that would break with decades of U.S. policy and could fuel violence in the Middle East.

“He’s still looking at a lot of different facts, and then when he makes his decision, he’ll be the one to want to tell you, not me,” Kushner said at an annual conference on U.S. policy in the Middle East organized by the Brookings Institution think tank in Washington. Jared Kushner, Donald Trump’s son-in-law and adviser, speaks about his role in the Middle East peace process at the Saban Forum in Washington.

A senior administration official said last week that Trump could make the announcement on Wednesday.

Past U.S. presidents have insisted that the status of Jerusalem — home to sites holy to the Jewish, Muslim and Christian religions — must be decided in negotiations. The Palestinians want Jerusalem as the capital of their future state, and the international community does not recognize Israel’s claim on all of the city.

Any move by the United States to recognize Jerusalem as Israel’s capital would fuel extremism and violence, Arab League Secretary-General Ahmed Aboul Gheit said on Saturday.

A senior Jordanian source said on Sunday that Amman, the current president of the Arab summit, has begun consultations on convening an emergency meeting of the Arab League and the Organization of Islamic Cooperation before Trump’s expected declaration this week.

Jordan, the current president of the Arab summit, would invite members of the two bodies to convene if the recognition is extended, to “discuss ways of dealing with the consequences of such a decision that raised alarm and concern”, the senior Jordanian diplomatic source told Reuters.

Officials are worried the move could trigger violence in the Palestinian territories and a spillover into Jordan, a country where many people are descendants of Palestinian refugees whose families left after the creation of Israel in 1948.

“A tremendous wave of anger will spread across the Arab and Muslim world,” said another regional diplomatic source in touch with U.S. officials on the issue.

Word of Trump’s planned announcement, which would deviate from the line taken by previous U.S. presidents who insisted Jerusalem’s status must be decided in negotiations, drew criticism from the Palestinian Authority.

King Abdullah warned of the repercussions of Trump’s expected move in talks this week in Washington with top administration officials. Mahmoud Abbas: ‘Recognition of Jerusalem as capital of Israel represents a threat to the future of the peace process.

Palestinian president warns against the move

The Palestinian president on Sunday warned that American recognition of Jerusalem as Israel’s capital would jeopardize the White House’s nascent Mideast peace efforts.

President Mahmoud Abbas’ comments came amid a diplomatic push by the Palestinian leader to rally international support against the possible American move later this week.

“Any American step related to the recognition of Jerusalem as capital of Israel, or moving the U.S. Embassy to Jerusalem, represents a threat to the future of the peace process and is unacceptable for the Palestinians, Arabs and internationally,” Abbas told a group of visiting Arab lawmakers from Israel, according to the official Wafa news agency.