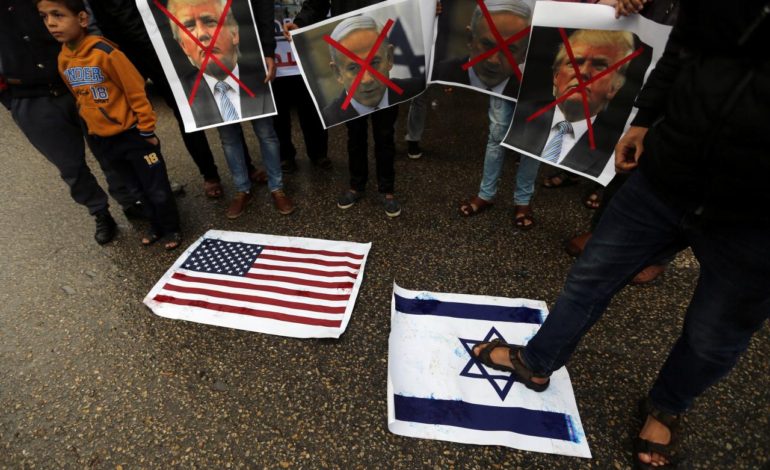 A Palestinian man steps on a representation of an Israeli flag as other demonstrators hold crossed out posters of President Trump and Israeli Prime Minister Benjamin Netanyahu during a protest against the U.S. intention to move its embassy to Jerusalem and to recognize the city of Jerusalem as the capital of Israel, in Rafah in the southern Gaza Strip, December 6/ REUTERS

CAIRO/AMMAN/BEIRUT — Arabs denounced President  Trump’s plan to move the U.S. embassy in Israel to Jerusalem as a slap in the face but few thought their governments would do much in response.

A Palestinian man steps on a representation of an Israeli flag as other demonstrators hold crossed out posters of Trump phoned allies in the Middle East late on Tuesday to tell them the United States would acknowledge Jerusalem as the capital of Israel on Wednesday and prepare to move its embassy there.

“It incites feelings of anger among all Muslims and threatens world peace,” said Sheikh Ahmed al-Tayeb, Imam of Egypt’s al-Azhar mosque, one of Islam’s most important institutions.

“The gates of hell will be opened in the West before the East,” he added, warning of the possible reaction.

Israel’s sovereignty over East Jerusalem, which it seized in the 1967 war, is not recognized internationally, and under the U.S.-brokered Oslo accords of 1993 the city’s status was to be decided in negotiations with Palestinians.

Arab governments issued statements of concern or condemnation and emergency meetings of both the Arab League and the Organisation of Islamic Cooperation have been called. But the U.S. decision has been taken.

In a bitterly divided region, backing for Palestinians is often seen as a unifying position, but it is also often a source of internal recriminations over the extent of that support.

A cartoon in al-Arabi al-Jadeed, a London-based Arabic news website, showed Trump raising a hand against an Arab as if to slap him, wearing a large glove marked with the Israeli flag.

In Lebanon, the Daily Star newspaper ran a full page photograph of Jerusalem on its cover with the headline “No offense Mr. President, Jerusalem is the capital of Palestine”.

Around the Arab world – including Egypt and Jordan, its only two countries to recognize Israel – and across the bitter divide between allies of regional rivals Saudi Arabia and Iran, people denounced the move.

“Neither I nor my children nor my children’s children will give up our right to Palestine and Jerusalem,” said Hilmi Aqel, a Palestinian refugee born in Jordan’s al-Baqaa camp after his family fled the fighting that accompanied Israel’s creation.

“America does what it wants because it’s powerful and thinks it won’t feel the consequences … Jerusalem is the capital of Palestine, not of Israel. It never can be,” said Nada Saeed, 24, a property broker in Cairo.

“This is a provocation for the Arabs,” said Mahdi Msheikh, 43, a taxi driver in Beirut’s Hamra district.

However, few people Reuters interviewed on Wednesday expected their governments to take any real action.

“What saddens me most about this is that Palestine in the past was an ultimate rights cause for us as Syrians and Arabs … Palestine has retreated from our priorities,” said a lecturer at Damascus university, who asked not to be named.

Saudi Arabia, home to Islam’s holiest sites, pushed a plan in 2002 offering Israel peace with all Arab countries in return for a Palestinian state including east Jerusalem.

But a recent newspaper report suggested it was willing to compromise on several areas that are regarded by Palestinians and some other Arab countries as red lines. Riyadh has denied that and called on Trump not to move the embassy.

“The current events on the world stage and especially in the Gulf help Trump take this step because the most important thing is that Saudi Arabia is not against it,” said Adnan, a 52-year-old trader in Beirut.

Many Saudi Twitter users posting under the hashtag “Jerusalem is the eternal capital of Palestine”, shared a film clip of the late King Faisal, who launched the 1973 Arab oil embargo against the West, pledging never to accept Israel.

But one Twitter user posting with a common Saudi family name said that while Muslims and Arabs would be provoked by the move, its top royals would not be. Instead, they would “suppress any move or call to jihad against the Zionist enemy”, he wrote.

In Cairo, Khaled Abdelkhalik, a lawyer, said: “We paraded Trump as an ally of the Arabs, but he turned out dirtier than his predecessors.”

Jordan, which agreed peace with Israel in 1994 while the peace process with the Palestinians still seemed on track, held a special session of parliament.

“I call on my colleagues to tear up the treaty of humiliation and shame,” said MP Yahya Saoud, referring to the peace deal.

Jordan, like Lebanon, is home to hundreds of thousands of Palestinian refugees.

“This is a conspiracy that is denying us our rights, the first of which is to return. They think we are a branch of thorns that they can step on and break,” said Fadia, a social worker with two daughters in Lebanon’s Burj al-Barajneh Palestinian refugee camp.

In Israel, analysts said that despite such warnings, they expected little violence or opposition.

“The moderate camp in the Arab world needs the United States as well as Israel in order to face their main threat, which is Iran,” said Efraim Inbar, president of the Jerusalem Institute for Strategic Studies.

“We may see some public announcements maybe denouncing the American decision, but in substantive terms I don’t think much will change.”