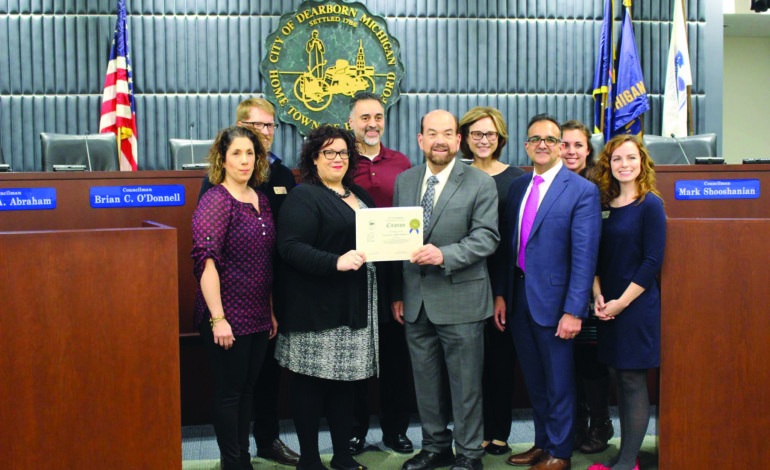 Commissioners organized the contest to encourage residents to take pride in their properties and to showcase the beauty of Dearborn’s neighborhoods and business districts, according to the city’s website.

“Attractive businesses add to the appeal of Dearborn and help to bring in more homeowners, visitors and customers,” the website states.

On Wednesday, Dec. 6, the City Beautiful Commission and City Council members awarded nine businesses for their efforts to enhancing the appearance of their properties. Mohamad Haidar, owner of Famous Hamburger, told The AANews he felt “great” after being awarded.

“We just kept the business clean…we decorate for the holidays,” he said. “We just like to keep a fresh image for our guests and us as well.”

Haidar made no reservations about his businesses success in the city.

“I recommend Dearborn in every sense,” he said. “To the clientele, to the other business and to the city itself. From A to Z, they help you out in any way.”

Commissioner Todd Schebor, who presented the awards, said the awardees ranged from a wide variety of business establishments which both put an emphasis on the quality of their products and on their buildings’ exteriors. The commission divides the city into 17 districts and each member chose three businesses they thought fit the criteria on upkeep, including landscaping, overall cleanliness and even the structure of a building, which could “add pizzazz” to the street, Ismail said. Once they were narrowed down to 15, Mayor Jack O’Reilly reviewed the nominated businesses and gave the final decision, provided they were in good standing with the city.

The commission also acknowledged residents who creatively decorate their houses for the Christmas season.

Erin Byrnes, the council’s newly-elected member, congratulated an audience of business owners and their families in the Administrative Center’s council chambers, as “the best of the best.”

“You set a great example for every business owner in our city,” she said. “People who currently own businesses or might be thinking about it, we want them to be able to look to you for the standard that we set and maintain throughout the city.” To those thinking about opening new businesses, O’Reilly told The AANews that now was the best time to be in Dearborn as major planned projects start coming together.

“All of a sudden, we have a lot of energy going on and a lot of development,” he said. “We have a lot of local people who have invested and coming forward with plans to build new projects and to transform new areas.”

The mayor added that stakeholders in the city are beginning to be more positive about what they can do in Dearborn and that his admiration wants to ensure it’s doing everything for businesses to get the best value and succeed.

“We want to be their ally, rather than some obstacle,” he said.