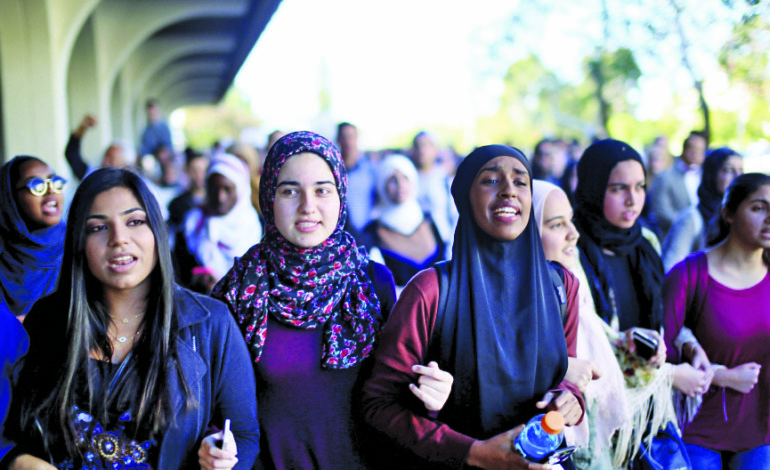 Students chant while marching at a rally against Islamophobia at San Diego State University in San Diego, California - Photo by Reuters

WASHINGTON — A growing number of Americans hold favorable opinions of Arabs and Muslims, a new survey by the Arab American Institute (AAI) shows.

The survey released Tuesday found attitudes toward Arabs, Muslims, Arab Americans and Muslim Americans have risen to the highest levels in a decade.

Conducted two months after the White supremacist rally in Charlotte, Virginia, the survey shows Americans have an increased awareness of racism, although there remains a strong political divide on the extent of its impact, AAI said.

Of those surveyed, 52 percent had a favorable opinion of Arab Americans, compared to 40 percent in 2015, while 51 percent thought favorably of American Muslims, compared to 33 percent two years ago.

Similarly, those who said they know an Arab or a Muslim held a far more favorable view than those who did not know a member of either community.

However, a deep partisan divide remained on the issue, with 54 percent of Democrats versus 31 of Republicans having a favorable opinion of Arabs and 58 to 26 percent thinking favorably of Muslims.

A similar divide appears in the opinions of Americans on a ban on immigrants and travelers from the Middle East or on those who are Muslims. Two-thirds of the Democrats surveyed did not approve of such a travel ban, while 52 percent of Republicans approved of President Trump’s proposals.

A majority of those surveyed, 59 percent, did not find it justifiable for law enforcement officers to profile Arab Americans and American Muslims based on their appearance.

Similarly, 68 percent of Democrats said there had been a rise in hate crimes against Muslims, but only 28 percent of Republicans thought the same.

The two sides also mirrored their opinions on whether there has been an increase in hate crimes against African Americans.