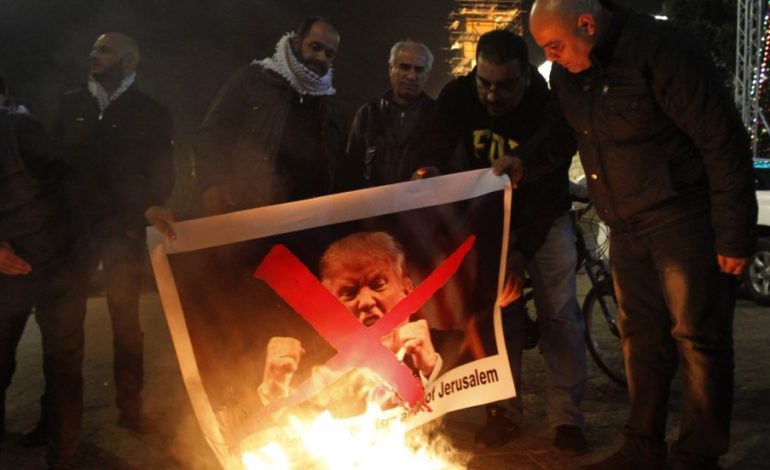 Palestinians burn a poster of President Trump during a protest in Bethlehem, West Bank, Tuesday, Dec. 6 - Photo by Reuters

President Trump’s decision this week to recognize Jerusalem as Israel’s capital was reckless, misguided and dangerous.

He has legitimized the illegal occupation of East Jerusalem. Let us not forget that the occupation of the West Bank and Gaza, along with the occupation and annexation of East Jerusalem, have been condemned by numerous United Nation Security Council resolutions. These illegalities have been reaffirmed over and over. Trump’s move affirms Israel’s unlawful, exclusive claims to the entirety of the Holy City. He emboldens the most fanatical religious elements in Israeli society, who actively campaign to demolish Muslim holy sites in Jerusalem and replace them with a Jewish temple. He sets the stage for war.

Trump’s recognition of Jerusalem as Israel’s capital also encourages and gives credence to Israel’s apartheid regime over the Palestinians. Arab residents of Jerusalem are stateless “permanent residents” of Israel. While they pay taxes, they are not full citizens of the state. Their residency rights can be ripped away from them for virtually any reason. Of course, Israel blatantly discriminates against its Palestinian residents, dramatically underfunding services such as housing, health, education and sanitation, while privileging those services to Jewish citizens and settlers.

Trump’s decision reverses more than 50 years of official U.S. opposition to Israel’s illegal actions in East Jerusalem that contravene its obligations as an occupying power under the Fourth Geneva Convention. Of course, other U.S. presidents have turned a blind eye to Israel’s illegal settlement activities, as well as the building of the wall that confiscated thousands of acres of Palestinian land and further disrupted their lives. But Trump’s action goes even further. It does away with the suggestions that the American government officially opposes these actions, legitimizing Israel’s ghettoization of Palestinians in Jerusalem.

Further, Trump’s reckless move validates Israel’s ethnic cleansing of Palestinians from west Jerusalem in 1948. Back then, Israel committed numerous war crimes, including the Deir Yassin massacre of April 1948, where several Zionist militias ganged together to massacre hundreds of Palestinians. Fearful Palestinians fled this terror, including from the western portion of the city, which was virtually emptied of its Palestinian inhabitants. Israel has refused to allow former Palestinian residents of Jerusalem to return to their homes, which Israel expropriated and gave to Israeli Jews without providing their owners with compensation.

Finally, Trump’s decision to recognize Jerusalem as Israel’s capital is in direct contravention of international law. Jerusalem, since 1947, has been classified internationally as a “corpus separatum”, a city in which no nation’s sovereignty has been recognized. This is precisely why no nation has ever placed its embassy in any part of the city.

Trump’s latest move, along with his insistence to pursue the Arab and Muslim immigration ban, his re-tweeting of anti-Islamic videos and his cozying up to Arab dictators, displays a deep disregard for the human rights of Arabs and Muslims worldwide. He is a clear and present danger to our communities worldwide in every respect, and he is a disgrace to American values.