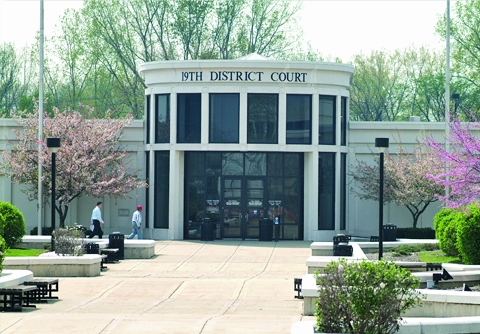 DEARBORN — For 940,500 citizens in Michigan, English is not their first language, according to a 2015 report from Data USA. This can lead to problems at Dearborn’s 19th District Court, and many others, as they do not employ full-time translators.

The absence of a translator causes problems for residents who don’t speak English.

One of these residents recently went before 19th District Court Magistrate Linda Mack to dispute a traffic ticket. The magistrate asked her if she knew why she was here and the woman seemed confused.

After asking the woman several times if she spoke English, Mack proceeded to ask the crowd of defendants gathered in the courtroom if they spoke Arabic and could translate for her.

A man stepped forward and said he did. He then worked with the woman to handle her dispute.

The case exemplifies an issue some members of the Arabic community experience when they participate in the judicial system, the absence of a full-time Arabic translator in the Arab-American capital of North America.

Ted Villemaire, deputy court administrator of the 19th Judicial District, said the court has translators hired on a contract basis and brings them in when needed.

He told the AANews that anyone who requests a translator will have one provided for them as required.

“I would have to look into the specific situation that transpired,” Eric Cyman, court administrator of the 19th Judicial District, said of the incident. “We do provide interpreters. If it’s determined, if it’s requested, we pay for them, it comes out of the court’s budget. In the two years that I have been here, I haven’t heard of any issues being brought to my attention.”

Villemaire and Cyman could not acknowledge that Mack erred when asking the crowd for a translator and that the court date should have been postponed because they weren’t present when the incident occurred and therefore were unable to comment.

Villemaire did say he’d been a court officer prior to becoming a deputy court administrator and had seen this error only a handful of times in his 11 years.

“Procedurally, if a person has limited English proficiency where they do not understand or speak English and it is determined that an interpreter is needed, the court will appoint a certified or qualified court interpreter and set a new date,” he told The AANews.

The act states, “The director of the Administration Office of the United States Courts shall prescribe, determine and certify the qualifications of the persons who may serve as certified interpreters, when the director considers certification of interpreters to be merited, for the hearing impaired and persons who speak only or primarily a language other than the English language, in judicial proceedings instituted by the United States,” according UScourts.gov.

In other words, an individual is not required to speak English in order to participate in the judicial process of the United States; he or she just needs to request a translator. This also means that he or she should request a translator prior to the court date.  The website also iterates why the act is in place.

“The use of competent federal court interpreters in proceedings involving speakers of languages other than English is critical to ensure that justice is carried out fairly for defendants and other stakeholders.”