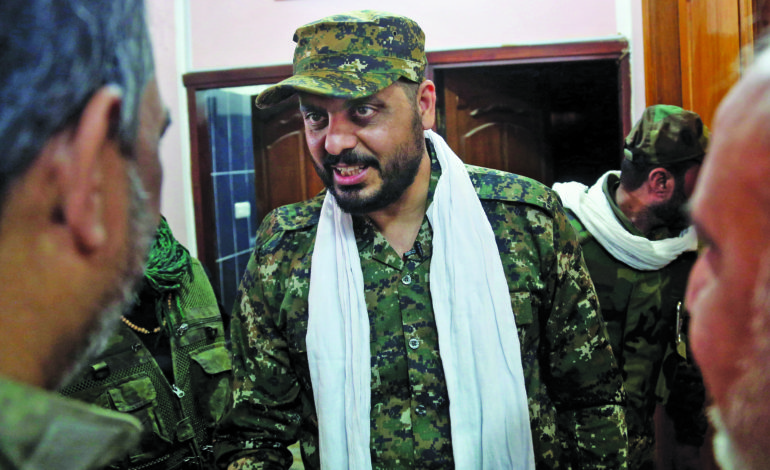 Qais al-Khazali, the founder and leader of the Asa'ib Ahl al-Haq militia

BAGHDAD — The mainly Shi’a Hashd al-Shaabi paramilitaries have lost more than 7,000 and sustained more than 21,000 injuries during the war against the ISIS terror group since 2014, an Iraqi militia leader has revealed.

Qais al-Khazali, the head of the Asa’ib Ahl al-Haq, which is funded and supported by Iran, said that with the sacrifices of the Hashd forces, they were able to foil the “plots” of the American forces and that of the extremists in Iraq and the region.

The Hashd forces lost 7,637 fighters and sustained 21,300 injuries, Khazali said on Wednesday, adding that his group specifically lost 956 fighters with another 2,743 injured.

The Iraqi army is yet to release the figures for its casualties. But earlier this year, the U.S.-led Global Coalition stated that it lost about 10,000 soldiers.

The Kurdish Peshmerga stated that it lost more than 1,800 soldiers and sustained more than 10,000 injuries.

Khazali said they took part in every major Iraqi-led combat operation in the country except for Mosul in Nineveh province in northern Iraq and Ramadi in the western province of Anbar, due objections from the U.S.-led Global Coalition.

“We must mention that this sacred Hashd is a pride to Iraq and Iraqis,” the Shi’a militia leader said in a speech. “It is even the greatest pride in the history of Iraq since the establishment of the first civilization of Sumer in Iraq thousands of years ago, until this very day.”

While he said that all Hashd units must come under the command of the Iraqi prime minister, according to a law passed by the Iraqi parliament in late 2016, Khazali said that they should be considered part of the Iraqi security forces.

The Hashd has about 140,000 registered fighters across Iraq, including some from other Iraqi components, but only about 120,000 are entitled to receive their salaries from the Iraqi government, Khazali said, adding that the force is small compared to the Iraqi army or the police and other forces under the interior ministry.

The Iraqi army has twice as many soldiers, and the interior ministry has about four times, Khazali stated.

Iraqi Vice President Nouri al-Maliki, who portrays himself as the defender of the Hashd forces, said this week that nobody except for the parliament has the power to disband the Hashd force, not even the Iraqi prime minister, despite the calls from inside and outside of Iraq to do so.

“There is a law for the Hashd,” Maliki asserted. “The Hashd cannot be cancelled unless by the power of law. The parliament itself does not allow cancelling the Hashd.”

Khazali caused controversy earlier this month when he appeared in a video that showed him on the Lebanese border near the Israeli-controlled Golan Heights after President Trump’s decision to recognize Jerusalem as the capital of Israel.

He has also called on Arab and Islamic leaders countries to close U.S. embassies over the Jerusalem row.

He said in October that the U.S. Army should immediately withdraw from Iraqi territory following the defeat of ISIS after Secretary of State Rex Tillerson demanded the Shi’a elements of the Hashd al-Shaabi “go home.”

After the Iraqi government’s declaration of victory over ISIS on Saturday, the U.S. State Department stated it “remains committed to standing with the government of Iraq and the Iraqi people to stabilize areas liberated from ISIS control.”