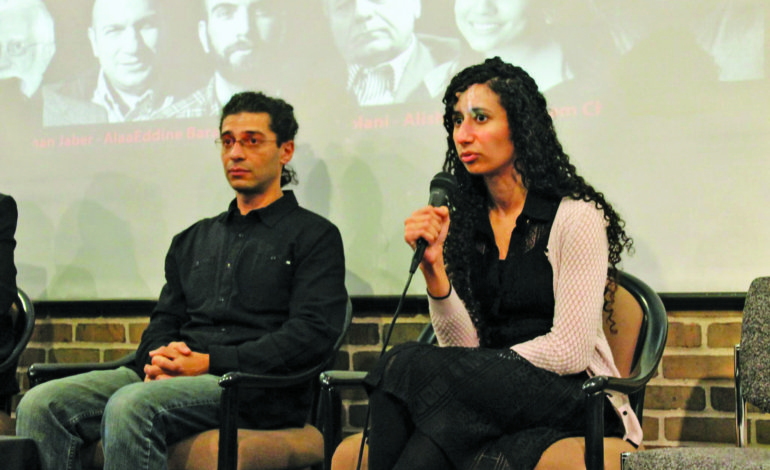 She grew up in an Egyptian Muslim American family, but incidents like a car attempting to run over her family while walking the streets made her feel rejected and question her identity.

Embabi said she then embraced Islam more deeply and began to wear the hijab at that age. Over time, she thought her religiosity was just a “shield” and began to reject Islam as an ideology.

But if Islam was her “in-group”, where did that leave her?

At the second Muslimish conference, held at the Center for Secular Humanism in Farmington Hills on Dec. 9, Embabi recalled her uncle turning to her mother and warning her of the increasing number of “secularists” in America.

She likened that rhetoric to the fear of immigrants and proclaimed “there is no us and them” and that “the universality of human rights matters.”

Although she didn’t have a place to fit in, she cared about connecting people and protecting their rights.

It might be why she joined Muslimish about four years ago and quickly became its president.

Muslimish is a space for individuals just like her, who identify with their heritage but said finding a label was like pinning custard to a wall, Embabi explained to a modest audience at the center.

She is a proud Arab and an ex-Muslim – although Muslims and non-Arabs alike often find it hard to understand.

The non-profit, founded in 2012 by Egyptian American and NYC resident Ibrahim Abdallah, has several chapters nationwide, including in Detroit and Washington D.C. Its membership ranges from atheists to progressive Muslims.

Embabi said Muslimish gives a voice to those who dare to take a critical lens to Islam, yet “cultivates conversations with Muslims for a more pluralistic society.”

A patchwork of identities In an increasingly connected world that faces a growing number of refugees, mass immigration and economic globalism, national and cultural borders have never been so easily blurred.

As communities mix, their identities and beliefs come into question, creating an opportunity for some to find shared values or to see them as threats to self-preservation.

From deciphering and reconstructing complex identities to anti-Muslim bigotry, those circumstances epitomize the current status of Arabs and the Islamic world, including Middle Eastern countries and their communities in the West.

At the conference, attendees expressed ideas like Abdallah’s examination of the Quran, debated the validity of Quranic translations and discussed the unique relationship Arabs have with the holy text.

“There is just one Quran,” Abdallah said. “The translation takes away from divine meaning…and the fact of the matter is that it causes problems in the real world.”

The AANews Publisher Osama Siblani called for a reform of Muslim activism at a time when being Muslim and Arab are conflated and viewed as threatening.

“It doesn’t matter if you’re an atheist and your name is Muhammad, you’re still considered a terrorist,” Siblani said.

Amer Zahr, an adjunct law professor at the University of Detroit Mercy and a comedian, called himself a Christian Muslim.

His father is a Christian and his mother is a Muslim. For him, Islam is a culture, just as it is an ideology and to set Muslims’ beliefs as concrete would be an “extremely flawed and exclusive” understanding of faith.

Islam speaks in a native language to Arabs, he said, and the Quran could either be used to cause harm or to be empowering, based on one’s understanding of the text.

Zahr added that he could apply many labels to his identity, but that it doesn’t mean it’s in a crisis.

“Maybe it’s a function of being refugees or Americans,” he said. “Everyone is hyphenated, and I embrace that.”

The need for reform

The need for a space to discuss religious reform and create niche identities in Islamic communities is similar to what Jewish Americans underwent in recent decades, said Jeffrey Falick, a secular humanistic rabbi appointed to lead The Birmingham Temple in July 2013. That’s the same building that houses the Center for Secular Humanism.

“It can be painful to challenge certain orthodoxies, religious or political,” he told those in attendance. “But what will change the face of this country will be our desire as humanists, Muslims, Christians and atheists to be part of the American landscape.”

She told the story of an uncomfortable funeral of a young man who died of a drug overdose in her Muslim community of Paterson, New Jersey. She said the deceased’s young friends were visibly disturbed by the tone of forgiveness and repentance set by the imam at a local mosque. According to Rauf, some of these youth said their friend was a victim.

“The imam had no idea of the generational gap that existed,” she said.

“The rituals no longer met their emotional, psychological and communal needs.”

They wanted control of the narrative, to tell their own stories, she said of the young man’s friends. At the mosque, she saw a need for a space within the existing structure to introduce new ways of speaking and offer new options from within – “New beginnings”, she called it.

But challenging Islamic ideologies and the concept of secularism is anything but new to Islam, others argued.

Wissam Charafeddine, a Dearborn-based educator and a Muslimish organizer, said the conference was an historic moment in its attempt to revive a century-old dialogue of secularism among Islamic scholars.

“We continually grow in our understanding of life,” he said. “Our philosophy grows with our experiences, but we cannot say we have left any of the integral parts of our identity.”

He reminded the audience of the long history of secular values within Islam and secular literature, like that of Islamic scholar Dr. Ali Abdel Raziq, who in 1925 wrote a book arguing against the role of religion in politics.

Charafeddine argued that both Islam and secularism insist that all participate in the shaping of a society and added that the religion deliberately lacks a foundation of governance – establishing a state that would be guided by the Prophet’s orders.

He added that Islam also preaches a free market and private ownership and forbids fraud and monopolies. According to the Quran, rules and morals should adhere the cultural customs of the time, he said.

Charafeddine proclaimed that the best method for Islam’s survival is reform and “selectiveness” of certain Islamic values and Quranic verses that advance the larger community’s goals.

Otherwise, a lack of discussion fuels anti-Muslim bigotry, he said.

“It is important to have diversity,” Charafeddine said, “to paint your own personality and identity to move forward and not to be struck with people who want one color and to be just like the rigidity of the text.”