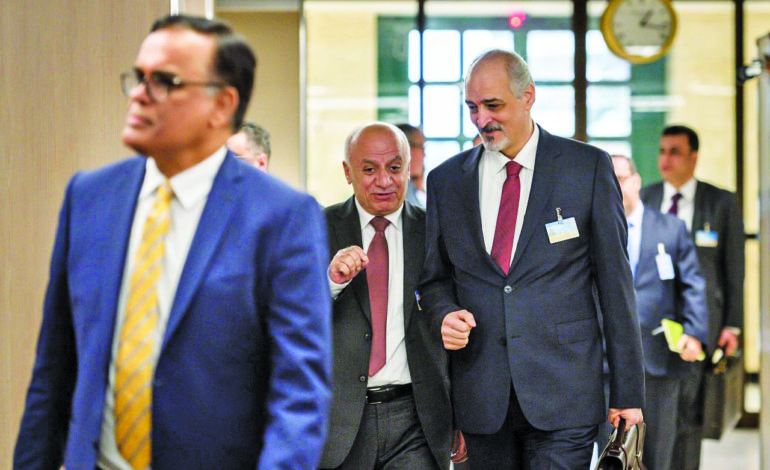 Syrian ambassador to the United Nations and head of the government delegation Bashar al-Ja'afari (R) and a member of his delegation arriving for a meeting with the U.N. Special Envoy for Syria during Intra Syria peace talks at the U.N. in Geneva, Switzerland Dec. 14 - Photo by Reuters

GENEVA — Syrian government negotiator Bashar al-Ja’afari accused a Syrian opposition group, backed by Western countries and Saudi Arabia, of sabotaging a round of U.N.-led peace talks that ended in Geneva on Thursday without any results.

He said Damascus did not want the talks to fail, but the opposition had put down a precondition last month by concluding a conference known as “Riyadh 2” with a declaration that President Bashar al-Assad had no role in Syria’s political transition.

“The Riyadh 2 Communiqué is blackmail of the Geneva process,” Ja’afari told reporters. “Those who drew up the Riyadh 2 statement were the ones who sabotaged this round. I mean by that the other side. I mean the Saudis and the Saudi handlers themselves who are the Western countries. They do not want the Geneva process to succeed.”

Ja’afari said the Syrian delegation at the Geneva talks had engaged seriously in the round, which he said had focused on counter-terrorism.

The mediator of the talks, U.N. Special Envoy for Syria Staffan de Mistura, used a television interview on Wednesday to urge Russia to convince its ally Assad of the need to clinch a peace deal to end the nearly seven-year-old war.

Ja’afari said Russia was its ally, but that de Mistura had made an “error” in the interview with Swiss television channel RTS. His mandate as facilitator of the talks would be reviewed in the light of his report to the U.N. Security Council on Tuesday, Ja’afari said.

“Nobody can exert pressure on us,” Ja’afari told reporters. “We have allies, we have friends, we have people on the ground fighting with us. Therefore what the special envoy may mistakenly say does not reflect our relationship with our allies.”

Although the Geneva process has made almost no progress, there was some hope at the start of the round that de Mistura would succeed in getting the two sides to meet, rather than shuttling between them.

But Ja’afari ruled that out while the opposition stuck to its Riyadh statement and dismissed a question about what he might say if he were to meet the opposition face-to-face at a possible Syria meeting in Sochi early in 2018, which Russia is trying to organize.

“We are politicians, we don’t work in science fiction,” he said.