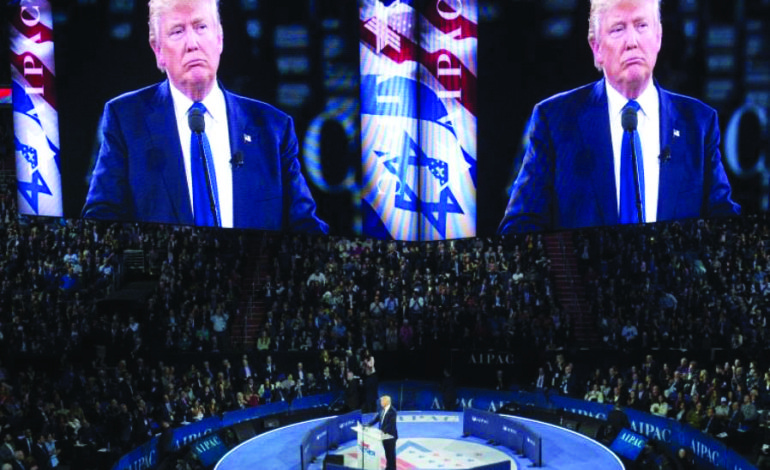 Last Wednesday, Donald Trump announced his plans to move the American embassy in Israel from Tel Aviv to Jerusalem as recognition, against that of the world, of Israel’s right to Jerusalem as its capital.

But the idea that Trump has “endangered” the peace process is misleading because it presupposes the existence of some substantial, ongoing path to peace between Israel and the Palestinian people (who do not even have their own state). No such viable path has existed for a long time.

Trump’s decision to recognize Jerusalem as Israel’s capital only exposed what the world already knew existed—America’s heavy bias toward Israel, and its incompetence at arbitrating any fair agreement between the parties.

Trump didn’t “make” the Palestinian people angry. They have been angry. At the settlements. At the statelessness. At the injustice that has characterized this “peace process” from its inception.

Trump’s move simply crystallized that their having held back their anger—that their hope in America—for so long has amounted to nothing.

More broadly, it is tempting to only hold liable our current administration for the global missteps (to say the least) with which America now finds itself associated. For the collective sense that “maybe America isn’t so great” blanketing much of the world.

But to blame America’s current positioning in the world on Donald Trump is to willfully ignore our troubled historical trajectory.

Every 10 minutes, a child dies in Yemen. This is the greatest humanitarian crisis today, and still news sources seem more concerned with discussions of the proxy war allegedly taking place between U.S.-backed Saudi Arabia and Iran, with Iranians potentially supplying Houthi rebels with arms while Saudi Arabia bombs, starves and contains an entire population. On October 6, Trump approved a $15 billion missile “defense” sale to Saudi Arabia, although it is unclear where in this inhumane offensive Saudi Arabia’s self-defense comes into play.

American involvement in Yemen’s humanitarian crisis dates back to the Obama administration’s backing of Saudi Arabia.

A bipartisan majority in Congress voted to recognize Jerusalem as Israel’s capital in 1995 during the Clinton administration. American presidential candidates for decades have campaigned on taking this step.

The United States was the last major world power to publicly condemn South African apartheid. Nelson Mandela was on America’s terrorist list until 2008.

The list goes on and traces all the way back to this country’s conception.

The United States of America, the self-appointed leader of the free world, was literally built on and through the enslavement of a people deemed inferior because of something so once-arbitrary as skin color.

How—and I ask this sincerely—can enslavement beget freedom? Until we face the ugliness of our past, every path forward is circular.

As far as I can remember, America has failed to live up to its grand, freedom-ringing claims. At least from where I stand as a Muslim American woman.

Maybe it was the war in Iraq, the civilian dead that were not counted, that were collectivized into “collateral damage” to ease the cost of war.

Or maybe the realization came before this, after 9/11 when I witnessed my mother, who wears a hijab, being spoken down to by a bank teller. I was made to feel, as a child, that my mother—and by extension I—did not belong in this country, and that worse, we were not wanted here.

It is certainly all of the things I have learned since those moments when I was first prompted to question America’s claim to its moral high ground. Since I was a child.

That I was born here, that this is my country, too, that my parents tried to shield me from its hate—from what is too often America’s ugly truth against those deemed “other”—only exacerbate the pain of realizing the extent of the myth of American freedom.

Attallah Shabazz, Malcolm X’s daughter, writes in the forward of her father’s autobiography that “truth does not change, only our awareness of it.”

Especially with the growing celebrity of minority authorship, authors like Ta-Nehisi Coates are making it more acceptable to recognize that America has all-too-often stood on the wrong side of history.

That history repeats itself is nothing new.

I have come to understand the price of certain truths, truths like those personified by Dr. King and Malcolm X.

And while I will always hope for better, I have been let down by this country enough times to know not to expect it to come easily or to come soon.

Even so, the optimist in me sees a silver lining to the Trump presidency—among the long list of his ineptitudes is his inability to misconstrue his corrupt intentions as benevolence. He has so obviously relinquished any even-superficial claim to the moral righteousness typically attributed to the American presidency. In fact, 9(.9) times out of 10, my instincts point me to side exactly where Trump does not. In spite of himself, Trump is allowing us moral clarity on issues that previously seemed more nuanced.

I know that any announcement about plans to move the U.S. embassy to Jerusalem is not in the world’s best interests. Because it was Trump’s announcement, I can be doubly sure.

In other words, Trump is showing us exactly where not to align ourselves—exactly how not to be—if we want better for the world.

-Mary Turfah was born and raised in Dearborn Heights and is a graduate of Yale University.