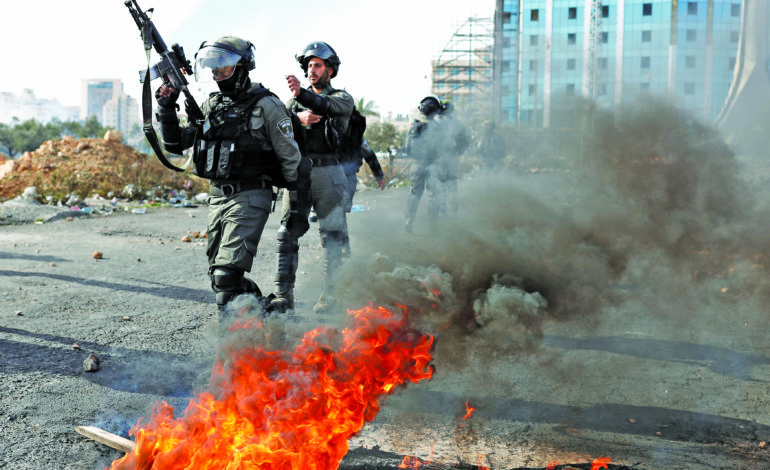 Israeli border police officers walk in front of a burned barricade during a protest near the Jewish settlement of Beit El, near the West Bank city of Ramallah, Dec.11/ REUTERS

President Trump’s decision to formally recognize Jerusalem as Israel’s capital was irresponsible and dangerous for more reasons than I can count. Let me outline just a few of the principal concerns:

While we have all grown weary of hearing the over-used mantra “this is the end of the peace process”, Trump’s decision may, in fact, be the nail in the coffin for any negotiated solution to the Israeli-Palestinian conflict. In the first place, there is no peace process. It has been replaced, instead, by a breath-holding exercise with Israelis and Palestinians waiting for Trump aides to cook up “the deal of the century.” It is presumed that when “the deal” is presented negotiations will begin.

The unilateral American recognition of Jerusalem not only prejudges one of the conflicts most sensitive issues, it does so in Israel’s favor. From the beginning of the modern “peace process”, there have been two fatal flaws that have hampered the effort: The asymmetry of power in Israel’s favor and the clear U.S. bias in support of Israel. Trump’s action has accented both flaws. It has emboldened and rewarded the most hard-line and intransigent elements in Israel while weakening and compromising those Palestinian and Arab leaders who have put their trust in the U.S. role. The decisions to recognize Jerusalem as the capital and to begin the process of relocating the U.S. Embassy makes it clear that the U.S. is not an “honest broker.” In this context, the president’s appeal to the parties to continue to focus on achieving peace simply doesn’t pass the smell test.

It must be recalled that when the Congress passed the Jerusalem Embassy Act in 1995, its Republican authors, working with Israel’s Likud, viewed it as a poison pill that would sabotage the then still barely operational Oslo Peace Process. The legislation was a GOP/Likud slap in the face of both Rabin and Clinton. The reason why Presidents Clinton Bush and Obama have used the act’s waiver provision to defer its implementation was precisely to avoid this poison pill and to preserve some U.S. peace-making credibility. The pill has now been taken and swallowed.

What the authors of the act and anti-peace forces in Israel and the U.S. knew was that Jerusalem is not to be toyed with. It is not just any city. It is central to the narratives of all three Abrahamic faiths. For this reason, the architects of the U.N. partition plan set it aside as an international zone. It was for this reason that when Israel occupied the western side of the city in 1948 and later declared Jerusalem as its capital, that unilateral decision was never recognized by the international community. Israel compounded its defiance in 1967 when, after occupying the rest of Palestine, it annexed a substantial area of Palestinian land (including more than two dozen Palestinian villages) and declared the entirety of West and East Jerusalem as “Greater Jerusalem”, insisting that it was Israel’s “eternal undivided capital.” This flagrant violation of international law was unanimously condemned by the United Nations. Seen in this context, Trump’s action puts the U.S. stamp of approval on Israel’s 70 year record of violations of law and U.N. Resolutions.

For Arabs and Muslims world-wide, Jerusalem has become a powerful symbol representing a century of betrayal by the West. Like the issue of Palestine itself, mention of Jerusalem evokes broken promises, brutal occupation by imperial and colonial powers, loss of control of history and denial of fundamental rights. I often remind American audiences that Jerusalem is to Arabs and Muslims what the 1890 massacre at Wounded Knee was to Native Americans. It may not have been their tribe that was involved in the infamous brutality inflicted on those who were killed at Wounded Knee—but what happened there spoke to all of them, reminding them of their collective history dispossession and continuing hurt. Jerusalem is the wound in the heart of Arabs and Muslims that never healed. With his callous decision to absolve Israel of its crimes and recognize their control of the city, by conquest, Trump rubbed salt into this wound.

It was, therefore, absurdly insensitive and galling for the U.S. president to couple his provocation with an appeal to Palestinians to remain calm and peaceful. He was, in effect, saying, “I don’t care what you have suffered, nor do I care how unjust and illegal Israeli actions have been, just sit back and take it.”

I would add that while, with his decision, Trump was playing to his right wing evangelical Christian supporters, he ignored the feelings of the Christian community in Palestine. In a statement issued the day before the president’s announcement, the patriarchs and bishops of the eastern Christian churches headquartered in Jerusalem pleaded with him not to recognize Israel’s exclusive claim to the city.

Finally, there is the reality of daily life for Palestinians in and around Jerusalem. Having closed East Jerusalem from the rest of the West Bank, Israel has accelerated its policy of strangling the life out of Arabs in Jerusalem. Denied employment, victimized by home demolitions and land theft and subject to host of discriminatory policies that violate fundamental human rights, the endurance of East Jerusalem’s Palestinian Arab population is tested daily. Trump’s silence on these matters while offering a hollow “God Bless the Palestinian people” at the end of his remarks was more like “ashes in the mouth” than an expression of real concern. It aggravated, more than it comforted.

While Americans remember December 7th, the date of the Japanese attack on Pearl Harbor, as “a day of infamy”, Arabs and Palestinians may well feel the same about December 6th— the date President  Trump delivered a fatal and fateful blow to peace and justice in the Holy Land.