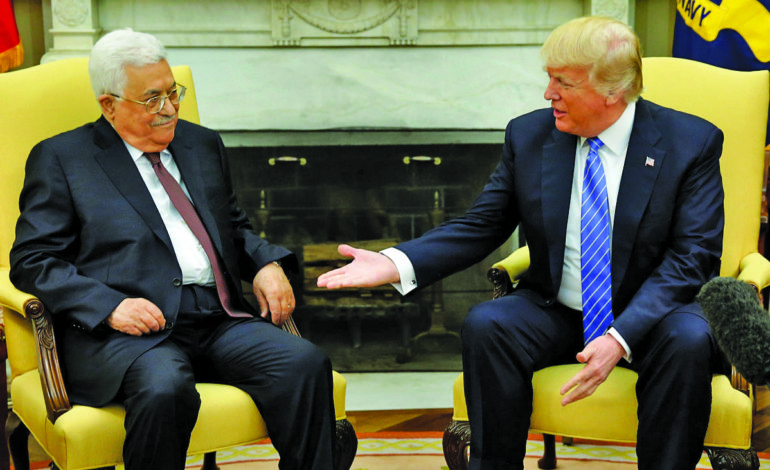 President Trump and Palestinian President Mahmoud Abbas at the White House, May 3

Now that President Trump has fully adopted the Israeli right wing political discourse on Palestine, the Palestinian Authority is in a very tough spot.

“I have determined that it is time to officially recognize Jerusalem as the capital of Israel,” Trump said in Washington last Wednesday. The embattled president has done what many had asked him not to do. But the truth is, U.S. foreign policy has been bankrupt for years. It was never fair, nor did it ever intend to be so.

Trump merely pulled the plug, not only on the so-called peace process, two-state solution “land-for-peace formula”, but also all the other tired clichés that have been long dead and decomposing.

But Trump’s announcement has also laid to rest the illusion that the U.S. was ever keen on achieving a just and lasting peace between Israel and its neighbors.

What is left to be said by those who have placed the Palestinian national project of liberation on hold for nearly three decades, waiting for the U.S. to fulfill its self-designated role of an “honest peace broker”?

The Fatah movement of President Mahmoud Abbas declared a “day of rage” in response to Trump’s announcement. Way to deflect attention from the real crisis at hand: The fact that the PA has miserably failed by leasing the fate of Palestine to Washington and, by extension to Israel as well.

Some are arguing that the two-state solution is not a U.S. property to keep or give away and that Palestinians can continue to advocate what seems to them to be the sane and possible solution.

However, the unpleasant truth is that the “two-state solution” in its current form was itself an American formulation, part of a larger framework that was championed mostly by the U.S. as it pushed Israelis and Palestinians to the “negotiation table” since the Madrid Talks in 1991.

Surely, there will be others who will attempt to continue playing that role, but what difference can Paris and London, for example, make if Tel Aviv and its powerful Washington benefactors have no interest in the subject whatsoever?

Trump’s announcement should not come as a complete surprise, though.

Between the hasty American withdrawal from Iraq, “pivot to Asia”, “leading from behind” doctrine throughout the so-called “Arab Spring” and failure to press Israeli Prime Minister Benjamin Netanyahu on freezing the illegal settlements in occupied Jerusalem and the West Bank, U.S. policies were growing bankrupt and futile.

This paved the road for a new type of thinking, one that moves away from pandering to Israel, while paying lip service to peace, to wholly embracing the Israeli political discourse and future outlook.

In fact, Trump’s recent announcement from Washington was a tamed version of his statement before the Israel lobby last year.

Of the many false claims and dangerous promises Trump made, a particular passage stood unique, for it offered early clues to what the future administration’s policy on Israel and Palestine would look like.

“When the United States stands with Israel, the chances of peace really rise and rises exponentially,” Trump said. “That’s what will happen when Donald Trump is president of the United States.

“We will move the American embassy to the eternal capital of the Jewish people, Jerusalem,” he announced. The mixed cheers and applause were deafening.

Now that Trump is president, he inherited a failed Middle East policy from his predecessor, a policy that Trump finds of no benefit to his administration. What truly matters to the new president is the support of the very constituency that brought him to the White House in the first place. The right wing, conservative, Christian-evangelical constituency remains the foundation of his troubled presidency.

So, on December 4, Trump picked up the phone and began calling Arab leaders, informing them of his decision to announce a move that has been delayed for many years: Relocating the U.S. embassy from Tel Aviv to Jerusalem.

Arabs fumed, for such a move would surely create further destabilization in a region that has been taken on a destructive course for years. Much of that instability is the outcome of misguided U.S. policies, predicated on unwarranted wars and blind support for Israel.

Recognizing Jerusalem as the capital of Israel is the last straw in an ailing discourse. The U.S. Middle East political framework of the past is collapsing to the confusion of U.S. allies in the region, and, of course, the pleasure of Israel.

In fact, Trump’s decision constitutes a total U.S. reversal in its approach towards the entire Middle East, considering that Palestine and Israel have been at the center of most of the region’s conflicts.

There are factors that made this embassy move an attractive option for the Trump administration:

The U.S. is currently experiencing unprecedented political instability. Talks of impeaching the president are gaining momentum, while his officials are being paraded before Department of Justice investigators for various accusations, including collusion with foreign powers.

Under these circumstances, there is no decision or issue that Trump can approach without finding himself in a political storm, except one issue— that being Israel.

Being pro-Israel has historically united the U.S.’s two main parties, the Congress, mainstream media and many Americans, lead among them Trump’s political base.

Indeed, when the Congress passed the Jerusalem Embassy Act in 1995, Trump’s interest in politics was quite haphazard and entirely personal.

The Congress has gone even further. Attempting to twist the arm of the White House, it added a clause, giving the administration till May 1999, to carry out the Congress’s diktats or face a 50 percent cut in the State Departments’ budget allocated to “acquisition and maintenance of buildings abroad.”

To avoid violating the Congress’ public law and to maintain a thread, however thin, of credibility, every U.S. president has signed a six-month waiver; a loophole in the law that allowed the White House to postpone the relocation of the embassy.

Fast forward to Trump’s AIPAC speech. His pledge to move the embassy then seemed merely frivolous and opportunistic.

That was the wrong assessment, however. Collusion between Trump’s team and Israel began even before he walked into the Oval Office. They worked together to undermine U.N. efforts in December 2016 to pass a resolution condemning Israel’s continued illegal settlement in the occupied territories, including Jerusalem.

Trump has finally decided to shed a mask that every U.S. president has worn for decades. And by doing so, the U.S. will, oddly enough, negate the paradoxical role it carved for itself in the last 50 years – that of “peacemaker.”