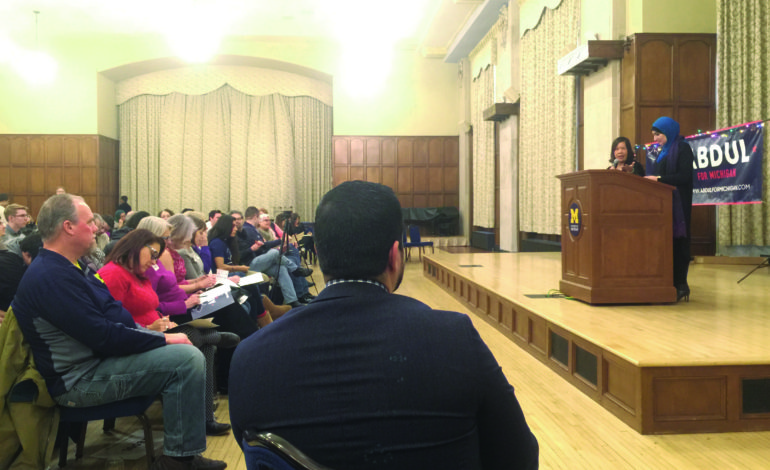 More than 100 students and citizens filled the second floor ballroom during finals week to hear the speeches from El-Sayed, a Democratic candidate for governor who hosted the event, and activists Sarsour and Wong.

Wong is founder of the 1 million member People for Bernie Sanders and creator of #FeelTheBern. Sanders (I-VT) ran for president in the Democratic primaries last year. Wong spoke briefly, then introduced Sarsour.

“If we can win in Alabama,” Sarsour, co-chair of the 2017 Women’s March and former executive director of the Arab American Association of New York, told the crowd. “I know, for sure, we can win in Michigan.”

Sarsour said that first person she ever attached her name to was Sanders. She drew parallels between the Sanders campaign and El-Sayed’s.

I have the audacity to believe we can make history and put the first Muslim governor in office. I want you to read the history books and say, ‘I was there.’ -Linda Sarsour

She said many aren’t giving El-Sayed, former executive director of the Detroit Health Department, a chance, very similar to the tone she heard when campaigning for Sanders in Michigan during the primary race. Sanders, who was down 19 percent in the polls prior to the vote, won the state. The crowd during the event – Photos by The AANews

Sarsour also said people question her optimism and ask where she gets the audacity.

“I have the audacity to believe we can make history and put the first Muslim governor in office,” she declared during one of her speeches. “I want you to read the history books and say, ‘I was there.'”

Sarsour reminded the crowd that she is not beholden to any political party, but is attracted to El-Sayed because he is a progressive.

El-Sayed’s platform includes support for single-payer healthcare, a $15 minimum wage and 100 percent renewable energy, according to his campaign.

When he entered, he ignited the ballroom with cheers. He told the crowd he grew up in Oakland County and knew that he had a life expectancy higher than someone just 20 minutes down the road from him, in Detroit. He found this unacceptable and it was one of the reasons he dedicated himself to public health.

El-Sayed is a graduate of the University of Michigan, Oxford University and Columbia University.  By the age of 30, he’d become the youngest health official in an American city. It was there he saw a 185-year-old health department with a higher infant mortality rate than his parents’ homeland of Egypt.

During his tenure as director of the Detroit Health Department, El-Sayed, instituted a program that gave schoolchildren in need glasses, ensured children were drinking lead-free water in Detroit schools and defended the air quality for children with asthma by standing up against corporations about their emissions, among other things.

He stressed that he could not do this work alone.

“The reason we need each other is not shared strength, but rather shared weakness,” he told the crowd.

El-Sayed said breaking a vision of politics that says a man like him cannot win is a priority for him. He said he had a daughter 19 days earlier and that that vision needs to be changed for the benefit of children like her growing up today.

Sarsour gave some advice to other activists during a speech. She spoke about how people constantly ask her how she helped raised $27 million in about one month for Sanders’ campaign.

“It was every single person, 1+1+1+1, equals mass mobilization,” Sarsour said. “Abdul El-Sayed can’t do this [alone]. He needs you, every single one of you. Every one of us has something to give, whether we can donate or make five calls when you leave here.”

El-Sayed’s campaign raised about $1,200 at the event. Due to a campaign finance rule, the funds generated were tripled to about $3,600.

After the event ended, El-Sayed, Sarsour and Wong stuck around for about 30 minutes, shaking hands, taking pictures and listening to voters’ concerns.

After the ballroom closed to set up for the next function, El-Sayed continued to speak to voters in the hallway for another 20 minutes.

El-Sayed’s campaign, Abdul for Michigan, will be hosting several voter registration drives throughout Southeast Michigan. Ann Arbor, Ypsilanti, Dearborn and Detroit will host events over the next month and a half, to get new voters registered.

During the event, Sarsour made three promises.

“Number one, we are going to win back the House and the Senate; too many people’s lives are at stake not to do that,” she said. “Number two, we’re going to win with progressives. The third thing that’s going to happen is all of us together and all the counties and volunteers across the state are going to make history by making Abdul the next governor of the state of Michigan.”