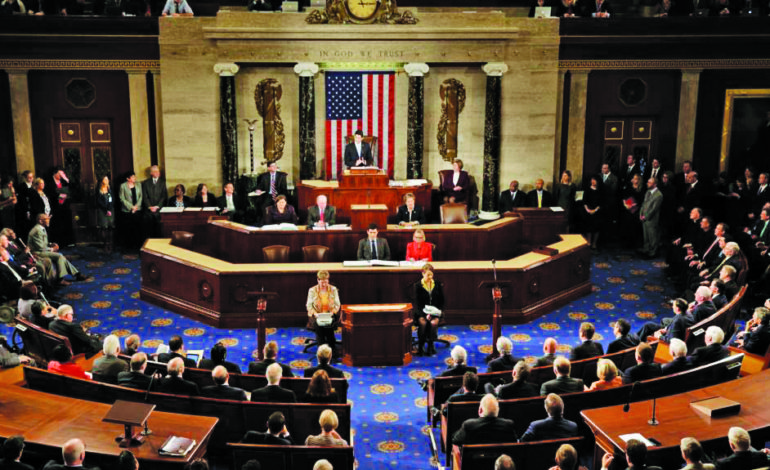 The House of Representatives, Capitol Hill in Washington, D.C., Oct. 29

President Trump announced on Wednesday, Dec. 6 that the United States will formally recognize Jerusalem as the capital of Israel and that the U.S. embassy would be moved to that multi-ethnic and multi-faith city. No other government in the world formally recognizes Jerusalem as Israel’s capital or has its embassy there, instead basing their diplomatic offices in Tel Aviv.

In the 1947 United Nations partition plan, Palestine was to have been divided between a Jewish and Arab state, with Jerusalem and surrounding areas designated as an international territory under U.N. administration. Instead— as a result of the first Arab-Israeli War— by 1949 Israel had annexed the western part of the area and Jordan the eastern part, but the international community refused to acknowledge either claim. Following the Israeli conquests of 1967, Israel annexed Palestinian-populated East Jerusalem and surrounding lands as well.

Though Trump’s announcement did not explicitly recognize Israel’s annexation of occupied East Jerusalem, the Israelis have long insisted that recognizing Jerusalem as its capital means recognizing the entire city under their exclusive control.

No government outside Israel recognizes this illegal annexation or supports the idea of a Jerusalem united under exclusive Israeli sovereignty. Until now.

The near-universal opposition to Trump’s decision by much of the military, intelligence and foreign policy establishment is not out of concern for the fate of the Palestinians or international law. Rather, they fear that effectively recognizing exclusive Israel control over the third holiest city in Islam will provoke a backlash throughout the Islamic world. Reactionary clerics and other Islamist extremists, building on centuries of resentment going back to the Jerusalem’s conquest by the Crusaders nearly a millennium ago, will likely take advantage of popular outrage over the decision to encourage violent attacks, including terrorism, targeting U.S. interests.

In fact, Trump may be seeking just such an outcome. Since launching his presidential campaign, he has gone to great lengths to stoke bigotry and fear against Muslims, as exemplified in his recent decision to retweet misleading anti-Muslim videos compiled by a British neo-fascist group. Any rioting and acts of terrorism by Muslims in reaction to Trump’s decision would only reinforce his narrative and his agenda for restricting immigration and bombing Muslim countries.

Trump’s announcement is actually the culmination of years of pressure by a large bipartisan majority of Congress and leaders of both political parties towards the White House. It represents the fulfillment of the Jerusalem Embassy Act of 1995, which mandates that the United States move its embassy to Jerusalem, though the bill allows a president to waive that requirement every six months if deemed in the national interest.

In the Senate, the bill was cosponsored by such prominent Senate Democrats as Joe Biden and John Kerry and only one Democrat (the late Robert Byrd) voted no. On the House side, just 30 out of 204 Democrats voted no, along with the independent then-Congressman Bernie Sanders.

Since then, every president has taken advantage of the waiver to prevent such a provocative move, despite continued bipartisan pressure from Congress. As recently as this past June, just days after Trump issued his first waiver of the requirement, the Senate voted 90-0 in favor of a resolution re-affirming the 1995 law and calling on President Trump “to abide by its provisions.” Co-sponsors included such leading Democrats as majority leader Chuck Schumer and Ben Cardin, ranking Democrat on the Foreign Affairs Committee, as well as Tammy Baldwin, Kirsten Gillibrand, Cory Booker and Ron Wyden.

Schumer has openly encouraged Trump to move the embassy and previously criticized his “indecisiveness” on the issue.

Support by Congressional Democrats and party leaders for moving the embassy is not due to demand from their constituents. A recent poll shows that 81 percent of Democrats oppose moving the embassy while only 15 percent approve. And polls show there is not strong support for such a move among American Jews, either. This is an extreme example of how the Democratic leadership and Congressional delegation diverge from their constituencies on major foreign policy issues.

For decades, the platforms of both the Republican and Democratic parties have called for recognition of Jerusalem as the undivided capital of Israel. Neither party has acknowledged that Jerusalem is the commercial, cultural, educational and religious center for Palestinian life.

In 2012, then-Los Angeles mayor and current California gubernatorial candidate Antonio Villaraigosa violated party rules by inserting an amendment into the Democratic Party platform recognizing Jerusalem as Israel’s capital without the requisite two-thirds majority. In the 2016 platform, nominee Hillary Clinton— an advocate of moving the U.S. embassy to Jerusalem— successfully pushed for language declaring that Jerusalem “should remain the capital of Israel”, while again saying nothing of Palestinian concerns.

Trump’s dangerous and provocative move regarding Jerusalem— like so many of his reckless policies both abroad and at home— requires strong, broad-based opposition. It is unfortunate that, at least in this case, there is no real opposition party.

-Stephen Zunes is a professor of politics and coordinator of Middle Eastern Studies at the University of San Francisco.