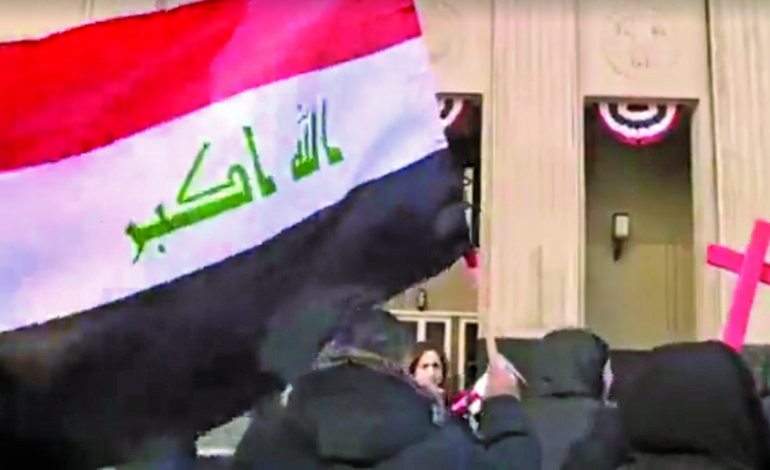 DETROIT — Six months ago, about 30 heavily-armed Immigration and Customs Enforcement (ICE) officers stormed into the home of Briana Moore and her husband, Ahmed Mohammed, a 52-year-old Iraqi American truck driver who’d served time in prison for allegedly stealing a rental car about a decade ago.

“Are you going to kill my dad?” Moore recalled her 4-year-old daughter asking an officer.

Mohammed was released in 2012, but there has been a change in the White House leadership since then. In June, President Trump renewed his promise to purge the nation of undocumented immigrants with criminal records. On Dec. 20, Moore and family members of 114 Metro Detroit Iraqis detrained by ICE stood in chilly weather outside the federal court in Detroit, demonstrating in hopes that U.S. District Court Judge Mark A. Goldsmith would issue a decision releasing their loved ones in time for Christmas.

Before the hearing began, they chanted slogans like “don’t take our dads away.”

The detainees have been held for about six months in prisons and detention centers across 22 states on the promise they would soon be deported, as they’d all previously served time for criminal offenses.

But their immigration status is in limbo, as they are unable to obtain a U.S. citizenship due to their criminal records and are unable to return to Iraq in a timely manner.

Goldsmith presided over the hearing between the American Civil Liberties Union (ACLU), which was arguing for the detainees’ release against the Justice Department’s wishes to keep them in custody.

ACLU attorneys pointed to the unconstitutionality of prolonged detainment and to the issue of due process, as the detainees have not been determined to be flight risks or dangers to their communities. They also asked for all the detainees’ cases be tried as a class-action lawsuit, to allow for “a more streamlined approach” and speed up their release on bond.

To rule otherwise would be telling fathers to wait in detention while they “languish”, only to be told years later that they are unable to deport them. Since July, one detainee has been deported.

“If you’re in immigration detention and can’t be removed [deported], what are you doing in detention?” ACLU attorney Margo Schlanger told Goldsmith. “People don’t need to be in detention while their cases go through. Right now, there is no reason to keep these folks in detention.”

DOJ attorneys argued that the detainees’ deportation was imminent and that they should remain in prison as long as it takes.

They said detainments were made based on the anticipation that the Iraqi Consulate in Detroit would not accept most of their applications for deportation to Iraq. They contested a motion to allow for a class-action lawsuit, arguing each case be tried on an individualized basis because their commonalities end with having criminal records.

The government’s lawyers also pointed to a Supreme Court opinion that six months of detainment was a reasonable amount of time.

A DOJ attorney also warned the judge his decision would overturn past courts’ rulings and would subject every court to a new legal framework.

Goldsmith did not make a decision on Wednesday, and at press time still has not issued one.

Moore attended the hearing and told The AANews she was more hopeful that her husband could spend time with her and their three children. The oldest is 4, butMohammed has not met his 3-month-old baby.

Mohammed is currently detained in the Northeast Ohio Correctional Center in Youngstown, Ohio, but had to stop Moore visiting him because she couldn’t take their children with her on a four-hour trip.

Moore said her family has become so financially unstable they would be “living on the streets” had they not moved in with her husband’s parents.

She can barely afford the $20 phone call to the prison, yet alone drive there all the time. She wouldn’t know where to get the money to pay for her husband’s bond if the judge decided to release the detainees.

The 11-year-old son of Habib al-Adioy told The AANews he, his two siblings and his mother, Hanh Nguyen, would visit their father at the Youngstown prison, before he was transferred to the Chippewa County Jail in Sault Ste. Marie, in the Upper Peninsula.

He said he doesn’t like visiting his dad, because aside from the eight hour drive, the facility is “disgusting.”

The boy said he remembers clearly when about a dozen ICE officers stormed into his home, stripped his father of all identification and chained him, while pointing at his father’s head what he described as “M-14” army weapons.

“It looked like as if he killed someone,” he said.

Now, he worries about taking after his mother, who suffers from anxiety and type-2 diabetes.

Nguyen told The AANews they can’t afford paying lawyer fees anymore. She has already hired an attorney for $6,000 but the lawyer “just took the money and didn’t do anything,” she said, adding that she could barely understand what the ACLU’s lawyers were talking about during the hearing.

Nguyen has to send her husband money to afford halal food and extra blankets to keep him warm, which she said the prison does not provide. This month, the modest income she made all went to paying bills, she said.

Both Moore and Nguyen said they doubt their husbands would eventually be deported to Iraq, a country they’d left during the Gulf War, as they don’t hold citizenships there anymore.

“It’s been six months already,” said Nguyen’s son. “He starving in there, but not one day would he keep us hungry.”