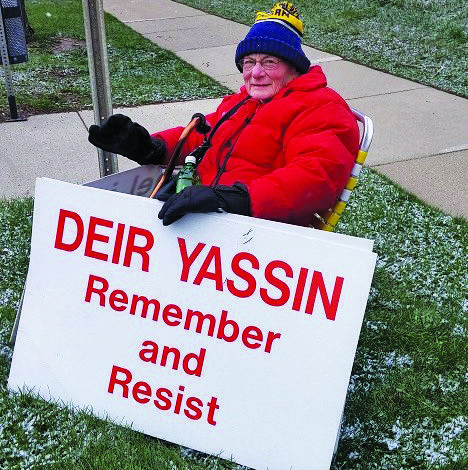 Marcia Federbush at a protest

Marcia Federbush, an American Palestine human rights activist for the last 14 years of her life, died on Friday, Dec. 15.

Before that, she led the country’s first Title IX lawsuit against a university, the University of Michigan, charging that in the 1971-72 academic year, the athletic budget for men was $2,611,196, while it was $0 for women.

In 1971, she unsuccessfully ran for the Ann Arbor Board of Education.

In 1998, Federbush was inducted into the Michigan Women’s Hall of Fame.

At the time, the organization wrote that she was a pioneer for equal educational opportunity and researched, wrote and presented the country’s first study of sex discrimination in a public school system.

It also said Federbush initiated and coordinated a comprehensive complaint filed with the United States and the Michigan Departments of Civil Rights challenging the Michigan High School Athletic Association to establish the same seasons in sports in which both sexes participate.

From 1979 to 1984, she served on the board of the Michigan Project on Equal Education Rights (PEER) of National Organization for Women’s Legal Defense and Education Fund, and from 1977 to 1980 on the national board of SPRINT, the arm of the

The Arab American News interviewed Federbush in its August 1, 2008 issue, as activists were pushing for a boycott of Israel in front of the People’s Food Co-op.

They had protested in front of the People’s Food Co-op in Ann Arbor on many weekends, because the grocery store sold some products made in Israel.

She said she became outraged at Israeli practices in the occupied Palestinian territories after reading several books on the subject including Jimmy Carter’s “Peace Not Apartheid.”

“I was extremely upset about the way we were behaving in Iraq in 2003,” she said. “And I started hearing talk about how Israel treated the Palestinians.”