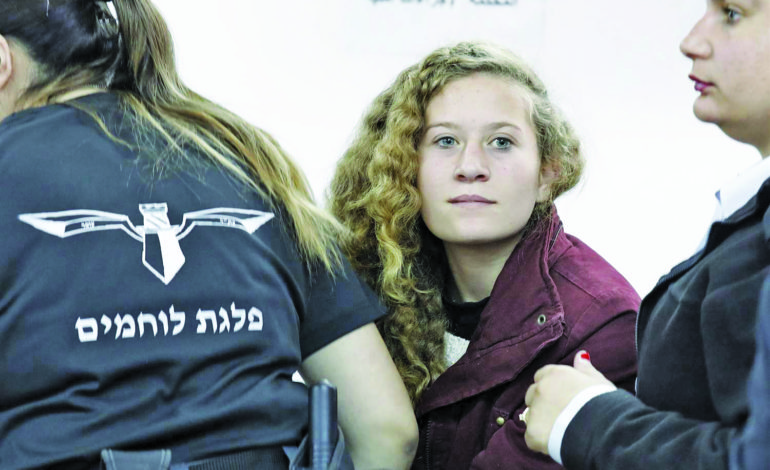 Palestinian Ahed Tamimi, a campaigner against Israel's occupation, appears at a military court at the Israeli-run Ofer prison in the West Bank village of Betunia - Photo by EPA

NEBI SALEH, West Bank — Ahed Tamimi, a prominent 16-year-old Palestinian activist, was detained Tuesday during a pre-dawn raid on her home by the Israeli army and border police in the occupied West Bank.

Ahed’s mother, Nariman, was also arrested on Tuesday afternoon during a visit to Ahed at an Israeli police station.

According to Ahed’s father, Bassem, the Tamimi family, who are well-known activists in the village of Nabi Saleh, woke up with a shock at about 3 a.m. on December 20, to the noise of Israeli forces banging on their front door and screaming. He opened the door for the soldiers, who pushed him aside and trooped into the house.

They forced the family into one of the rooms as they went about rifling through the household contents, throwing clothes and possessions on the floor and leaving behind a mess.

The soldiers then informed the family that Ahed was being arrested, without giving any reasons.

“Nariman was hysterically crying and attempted to hug Ahed, but she was thrown to the ground by the soldiers,” he said.

Despite Ahed being a constant fixture at Nabi Saleh’s protests, this is the first time she has been detained by Israeli forces.

She was handcuffed and led by the soldiers outside to an Israeli army jeep. The family was prevented from following her outside.

According to her father, at least 30 soldiers were involved in the raid and Ahed’s arrest.

The soldiers confiscated the family’s phones, computers and laptops. Bassem Tamimi said his 14-year-old son had refused to give the soldiers his phone.

“Six soldiers pushed him down and violently took it from him,” he said.

Later in the afternoon, Nariman Tamimi went to visit Ahed, who was being held at a police station near Jabaa village in the Jerusalem district of the West Bank, so that she could be present during the minor’s interrogation.

Before long, Bassem Tamimi received a phone call from his lawyer saying that Nariman had been arrested upon her arrival at the police station.