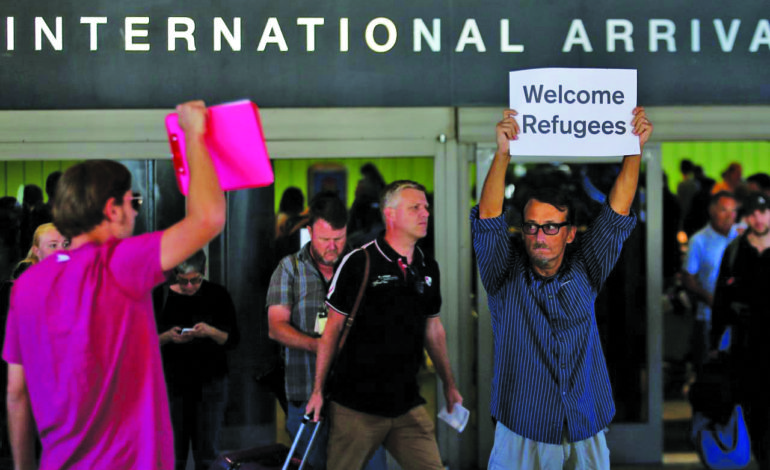 A protestor holds up a sign at Los Angeles International Airport in California, June 29

WASHINGTON, D.C. — The State Department has told refugee agencies it will sharply pare back the number of offices across the country authorized to resettle people in 2018 as President Trump cuts the number of refugees allowed into the United States.

The announcement was made at a Dec. 1 meeting in Washington with State Department officials and representatives from nine major refugee agencies, several executives of the agencies said.

Advocates said the decision is likely to lead to the closure of dozens of resettlement offices around the country, potentially leaving some refugees without access to services that help them integrate into American life.

Refugee resettlement in the United States is handled by nine non-profit agencies that receive funding from the federal government for some of their refugee work. They partner with, or oversee, hundreds of local offices in nearly every state that help new arrivals with basic tasks like enrolling children in school, arranging doctors’ visits and applying for Social Security cards and other documents.

Though the agencies are independent, they must get government approval for where they will resettle new refugees.

Aid workers and state officials involved in refugee resettlement said the agencies were informed by the State Department in the Dec. 1 meeting that offices expected to handle fewer than 100 refugees in fiscal year 2018 will no longer be authorized to resettle new arrivals, which means many of them will have to close. There are about 300 resettlement offices spread across 49 states, and advocates estimate several dozen are at risk, though shuttering plans will not be finalized until next year.

Refugee advocates say the closure of local offices will undermine that goal. They say the offices play a crucial role in helping newcomers traumatized from having fled conflict or persecution. Even if no new refugees are resettled by the offices they still have an obligation to help those already here, they say.

Some conservative groups that favor lower immigration said they would welcome curbs on the agencies’ activities.