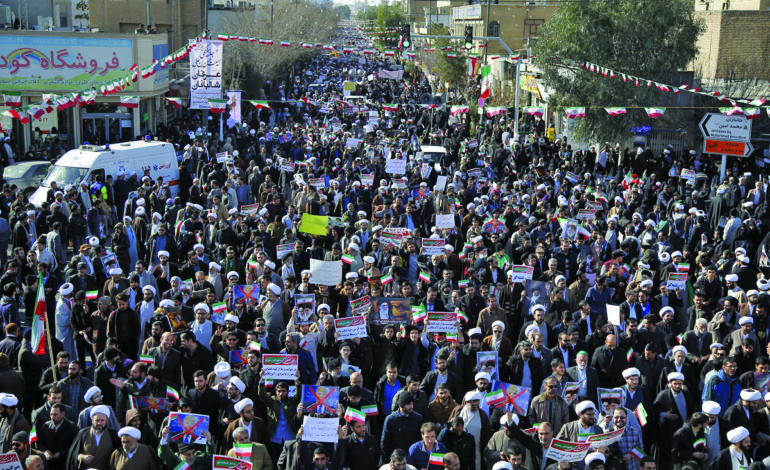 TEHRAN — Iran’s Revolutionary Guards chief announced the “end of the sedition” Wednesday as hundreds of thousands rallied in a show of support for President Hassan Rouhani’s government after days of deadly unrest. Condemning President Trump, who has voiced support for the protests, Rouhani said: “This gentleman who today sympathises with our people has forgotten that a few months ago he called us a terrorist nation. The one who has opposed the Iranian nation from his head to his toe has no right to express sympathy for people of Iran.”

General Mohammad Ali Jafari said the guards only intervened “in a limited way” against fewer “trouble makers” nationwide, adding that a large number of them had been arrested.

Protests over poor economic conditions and rising prices on gas among other goods, broke out in Iran’s second city Mashhad on December 28 and quickly spread across the country, turning against the regime as a whole.

A total of 21 people have died in the unrest, with protesters attacking government buildings and police stations in some areas.

“Today we can announce the end of the sedition,” Jafari said, quoted on the guards’ website.

“A large number of the trouble makers at the center of the sedition, who received training from counter-revolutionaries, have been arrested and there will be firm action taken against them,” he said.

Jafari spoke after massive rallies of pro-regime supporters took to the streets.

Chants of “leader, we are ready” were heard as thousands rallying in the cities of Qom, Ahvaz, Kermanshah and elsewhere across the country.

State television broadcast live pictures of pro-government rallies on Thursday, including Ghaemshahr in northern Iran, Mashhad in the northeast and Shahin Shahr in central Iran. Marchers carried posters saying, “No to riots” and “Death to seditionists”, as well as portraits of Khamenei.

Reports from the Iranian capital say that a heavy police presence was still on the streets of Tehran, along with a large number of Revolutionary Guards.

General Jafari added that those behind the protests had “intervened massively on social media,” but that “once restrictions were started, the troubles reduced.”

Telegram and Instagram were blocked on cell phones soon after the protests began on December 28.

Telecoms Minister Mohammad-Javad Azari Jahromi said Telegram would only be unblocked if it removed “terrorist” content.

“I had mail exchanges with the head of Telegram and I told him that the continuation of Telegram’s activities is conditioned on the suppression of terrorist content,” he said

There were few reports of anti-government protests, the most powerful challenge to the regime in years, appeared to have fizzled Thursday.

No more than 42,000 people have taken part in the anti-government protests since December 28, Interior Minister Abdolreza Rahmani Fazli said, according to the semiofficial Iranian Student News Agency.

President Rouhani expressed hope in a phone call with Turkish counterpart Recep Tayyip Erdogan that the protests would end in a few days, a Turkish presidential source said.

Erdogan also said in an interview with French television LCI broadcast ahead of his visit to Paris on Friday, that foreigners were acting as provocateurs in Iran, echoing comments by Iranian leaders after a week of unrest in towns across the country.

The political establishment has closed ranks against the unrest, saying the protests were part of a foreign plot to destabilize the country.

“The enemy is always looking for an opportunity and any crevice to infiltrate and strike the Iranian nation,” Khamenei said on Tuesday. The U.S. wants to “amplify the voices of the Iranian people,” Nikki Haley, America’s ambassador to U.N. said, as she praised the “bravery” of protesters and read out their slogans

The Islamic Republic of Iran stated in a letter to the United Nations on Thursday that the United States is tapping social media to incite protesters “to change their government”, thus tampering in Iranian affairs.

Tehran accused President Trump and Vice President Pence of inciting Iranians to protest against the government through a series of tweets and described U.S. interference in Iranian issues as “grotesque.”

The letter also pointed to a U.S. State Department official’s Tuesday statement that the United States was communicating with anti-government protesters through its Facebook and Twitter pages in Farsi, and was encouraging them to demonstrate.

Steve Goldstein, the State Department under secretary for public diplomacy and public affairs said on Tuesday that Iranians were using virtual private networks to access Facebook and Twitter pages where the department was communicating with protesters.

President Trump said Iranians were trying to “take back” their government, extending a drumbeat of encouragement for the protests.

“You will see great support from the United States at the appropriate time!” he tweeted, without offering any specifics.

Nikki Haley, the U.S. ambassador to the United Nations, said earlier this week Washington was seeking emergency sessions on Iran’s turmoil at the U.N. Security Council in New York and the U.N. Human Rights Council in Geneva. Russia rejected the idea, with Deputy Foreign Minister Sergei Ryabkov calling it “harmful and destructive”, according to RIA news agency.

He said Iran’s domestic affairs had nothing to do with the U.N. Security Council’s role, which was the “maintenance of international peace and security.”

Ryabkov said that Moscow remained committed to the 2015 international deal to curtail Tehran’s nuclear program, which President Trump has challenged.

In Paris, French President Emmanuel Macron said it was important to maintain dialogue with Iran, warning that the tone of comments adopted by the United States, Israel and Saudi Arabia toward Tehran was virtually a path to war.

In Beirut on Wednesday, the leader of Lebanon’s Hezbollah group played down protests in Iran as economic discontent, saying they were not rooted in the political issues which spurred huge numbers to demonstrate in 2009 and were expected to end soon.

“In Iran there is nothing to worry about and the issue is being taken seriously … The size of the protests is not large,” Sayyed Hassan Nasrallah said in an interview with al-Mayadeen satellite channel. “America, Israel and Saudi Arabia have entered the crisis in Iran.”

Zarif tweets, strikes back at Trump

In a Thursday tweet, Iranian Foreign Minister Javad Zarif hit back at the White House for what he cast as duplicitous comments. Among them: Labeling Iran a “terrorist nation”, denying its citizens entry into the United States and Trump saying he respected Iranians while denying them the benefits of the Joint Comprehensive Plan of Action, which is aimed at ensuring Iran’s nuclear program is pursued for only peaceful ends. Even reformists in Iran, who backed the 2009 protests, have condemned the violence and the support the demonstrations have received from the United States, Israel and Saudi Arabia.

But they also urged the authorities to address legitimate economic grievances.

“Officials must acknowledge the deplorable situation of the country as the first step to hearing the protesters,” tweeted Mohammad Taghi Karroubi, whose father, Mehdi Karroubi, has been under house arrest for almost seven years for helping lead the 2009 demonstrations.

In 2009, authorities put down protests against the re-election of hardliner Mahmoud Ahmadinejad. Many have been turned off by the violence, which has contrasted with the largely peaceful marches in 2009.

But on the streets of the capital, there is widespread sympathy with the economic grievances driving the unrest, particularly the high unemployment rate for young people.

Mojtaba Mousavi, a Tehran-based political analyst, told reporters by phone that Iranians do not generally support violence, no matter how unhappy they are with their government.

“There are certainly Iranians who aren’t happy with certain policies, frustrated people who would like to protest against their economic situation, but history shows none of these people support violence and subversion,” he said.

But, “This week’s protests turned into riots.”

Rouhani came to power in 2013 promising to mend the economy and ease social tensions, but high living costs and unemployment have left many feeling that progress is too slow.

Rural areas, hit by years of drought and under-investment, are particularly hard-hit.

Rouhani, in his first comments about the protests, aired on national television on Sunday night, said, “People have the right to criticize”, but said the authorities would not tolerate antisocial behavior. He said criticism was “different from violence and destroying public properties.”

Rouhani, urging the nation to be vigilant, acknowledged that people were unhappy about the state of economy, corruption and a lack of transparency.

“People are allowed under the constitution to criticize or even protest but […] in a way that at the end they lead to a better situation in the country for the people,” he said.

Condemning President Trump, Rouhani said, “This gentleman who today sympathizes with our people has forgotten that a few months ago he called us a terrorist nation. The one who has opposed the Iranian nation from his head to his toe has no right to express sympathy for people of Iran.”