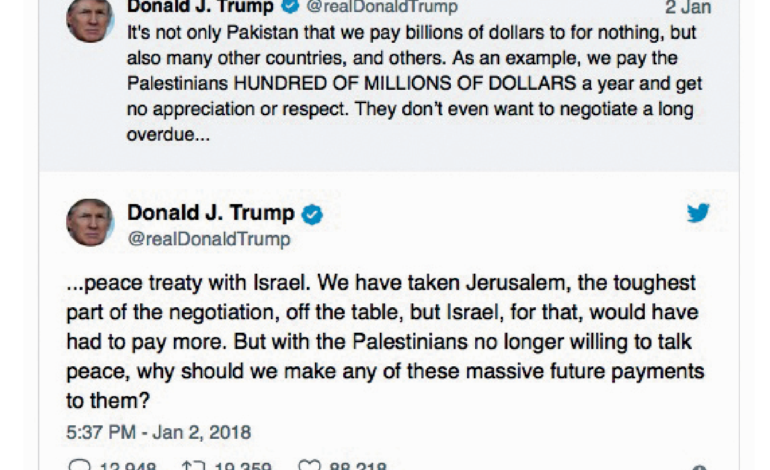 A million Palestinians in Gaza depend on UNRWA emergency food rations. That number soared from just 80,000 in 2000, after years of Israeli siege and military assaults on the territory.

What would happen if Donald Trump carries out his threats to stop U.S. aid to Palestinians?

If he means a cutoff of U.S. funding to the Palestinian Authority, potentially bringing about its collapse, he would be robbing Israel of one of its key tools for maintaining its regime of occupation and apartheid over millions of Palestinians.

But if he means cutting U.S. funding for UNRWA, the U.N. agency for Palestine refugees, that could cause a humanitarian catastrophe.

It would inflict suffering on millions of people who have been forced to depend on UNRWA’s provision of health and education services and emergency food and shelter because Israel denies them their rights.

On Tuesday, Trump continued a Twitter diatribe against countries he accuses of taking U.S. aid without being sufficiently subservient.

“It’s not only Pakistan that we pay billions of dollars to for nothing, but also many other countries, and others,” the president wrote. “As an example, we pay the Palestinians HUNDRED OF MILLIONS OF DOLLARS a year and get no appreciation or respect.

“They don’t even want to negotiate a long overdue peace treaty with Israel,” he added. “We have taken Jerusalem, the toughest part of the negotiation, off the table, but Israel, for that, would have had to pay more. But with the Palestinians no longer willing to talk peace, why should we make any of these massive future payments to them?”

Trump came to office promising to deliver the “ultimate deal” in the Middle East. Last month he sabotaged whatever vanishingly slim chances he had of delivering by unilaterally declaring Jerusalem Israel’s capital and saying he will move the U.S. embassy there.

Under those circumstances, not even PA leader Mahmoud Abbas could continue to play along with the “peace process” charade.

As a result, the U.S. effort appears to have collapsed, with Vice President Pence repeatedly postponing a visit to the region.

Although Trump’s bullying and threats failed to stop the overwhelming majority of countries from condemning his Jerusalem move in a U.N. General Assembly vote last month, he appears to think financial blackmail will work against the Palestinians.

Abbas’ office responded to Trump’s threats by declaring that Jerusalem is “not for sale.”

Aid to PA is aid to Israel

Over the last decade, U.S. aid to the Palestinian Authority has averaged around $400 million a year – and primarily benefits Israel by reinforcing the status quo of occupation.

It is precisely because aid to the PA is in effect aid to Israel that the powerful lobby group AIPAC has repeatedly pressed Congress to fund it.

In August, AIPAC gave its backing to a bill threatening to cut off U.S. aid to the PA, but only after exceptions were inserted to ensure that money would continue to flow for “security cooperation.”

It has always been a fair bet that AIPAC would intervene to prevent any aid cutoff to the PA. Now nothing can be taken for granted, although the organization maintains a nominal commitment to a “two-state solution.”

But in Israel, leaders who demand annexation of most of the West Bank are increasingly dominant and they have strong supporters in the Trump administration.

If the PA goes, the so-called international community will no longer be able to pretend that there is a Palestinian state-in-waiting, and will have to deal with the reality that Israel directly rules over millions of Palestinians who have no rights whatsoever solely because they are not Jewish.

From the Palestinian perspective, the only viable path following a collapse of the PA would be to campaign for full Palestinian rights in every part of historic Palestine: A democratic, nonsectarian one-state solution to counter the apartheid version Israel is imposing.

In addition to financing the PA to protect Israel, the U.S. is also the largest single contributor to UNRWA, the cash-strapped and overstretched U.N. agency that meets basic needs of millions of Palestinian refugees in the occupied West Bank and Gaza, Jordan, Syria and Lebanon.

At a new year’s press conference on Tuesday, Nikki Haley, Trump’s U.N. ambassador, was asked if the U.S. would maintain funding for UNRWA in light of the U.N. General Assembly resolution on Jerusalem that was backed by the Palestinian Authority.

Replying, Haley did not mention UNRWA by name, but stated, “I think the president has basically said that he doesn’t want to give any additional funding — or stop funding — until the Palestinians are agreeing to come back to the negotiating table, and what we saw with the resolution was not helpful to the situation. We’re trying to move forward a peace process, but if that doesn’t happen, the president’s not going to continue to fund that situation.”

Along with the European Union, the U.S. is one of the largest contributors to UNRWA, providing $380 million of the agency’s $1.1 billion budget in 2015.

UNRWA provides essential health and education services to more than 5 million Palestinian refugees, including half a million schoolchildren.

In addition, the agency has been providing emergency food and other assistance to hundreds of thousands of Palestinian refugees affected by the civil war in Syria.

In Gaza, half the population of 2 million rely on emergency food assistance from UNRWA, a significant increase from the 80,000 in 2000 as a result of repeated military attacks that have destroyed the territory’s economy, rendering it unlivable.

Between them, Lebanon and Jordan are home to 2.5 million Palestinian refugees served by UNRWA.

These countries, which host the largest refugee populations in the world per capita, including people who have fled the war in Syria, would not be able to cope with a sudden cut in UNRWA services and such a reduction could lead to social and political unrest.

For years anti-Palestinian extremists, especially in the U.S., have waged smear campaigns against UNRWA, claiming the agency teaches anti-Israel “incitement” or harbors weapons in its schools.

Pro-Israel propagandists often claim that the existence of UNRWA “perpetuates” the existence of Palestinian refugees. They believe that if the agency were dissolved, the demand for refugees’ right of return — which is anathema to Zionism’s goal of ensuring there are as few Palestinians in historic Palestine as possible — would also evaporate.

This is rather like arguing that since hospitals are full of sick people, then closing down all health facilities would end disease. However, UNRWA’s enemies are not looking to solve problems, but to make the Palestinians disappear.

It is not entirely clear if Haley meant that the U.S. would cut aid to UNRWA. What is clear is that doing so would inflict untold additional suffering on some of the world’s most vulnerable people.

Such considerations have never deterred the U.S. from taking a course of action in the past.

-Ali Abunimah is the co-founder of The Electronic Intifada.