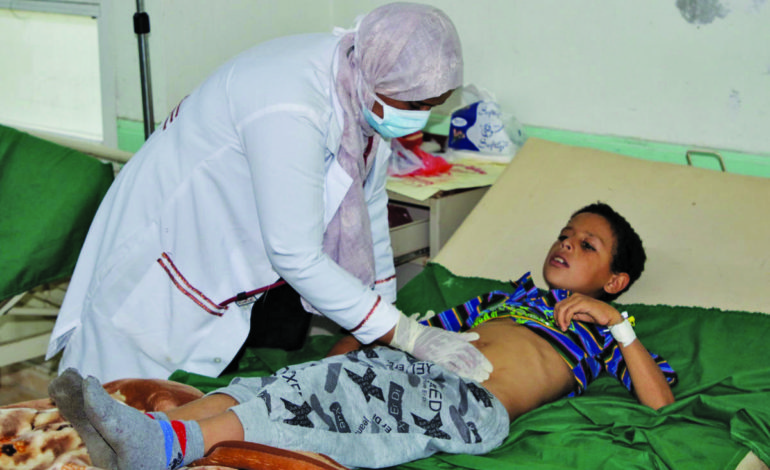 Nahla Arishi, a pediatrician, checks a boy infected with diphtheria at the al-Sadaqa teaching hospital in the southern port city of Aden, Yemen, Dec. 18 - Photo by Reuters

GENEVA — At least 471 people in Yemen are believed to have been infected with diphtheria, killing one in 10 of them since the outbreak began in mid-August, the World Health Organization (WHO) said on Thursday.

Yemen, one of the Arab world’s poorest countries, is embroiled in a proxy war between the Houthi armed movement, allied with Iran, and a U.S.-backed military coalition headed by Saudi Arabia.

The United Nations calls Yemen the world’s worst humanitarian crisis, with 8 million people on the brink of famine.

Ibb and Al-Hodeidah governorates are the hardest hit by diphtheria, spread through close physical and respiratory contact, WHO spokesman Tarik Jasarevic said in response to a query.

“The overall case fatality ratio is 10 percent,” he said, noting that 46 fatalities had been recorded as of Jan. 2.

The spread of diphtheria — which can be prevented by vaccine — compounds widespread hunger and one of the worst cholera outbreaks ever recorded, with more than 1 million cases and 2,227 deaths since April.

The WHO, a U.N. agency, has delivered antibiotics and vials of diphtheria antitoxin to affected areas and is helping establish treatment centers.

Along with UNICEF, it has vaccinated children around Ibb against the disease.

Yemen’s health system has virtually collapsed, with chronic shortages of medical supplies, low immunization rates and most health workers unpaid throughout the war.