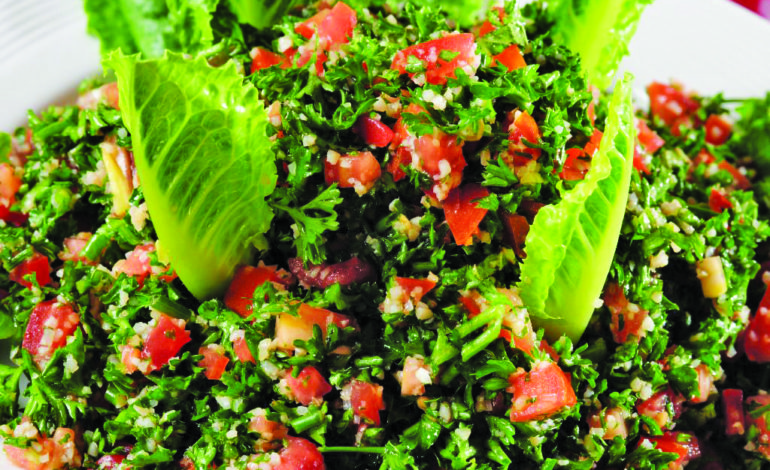 Between Christmas and New Year’s Day, I became embroiled in what The Jerusalem Post termed a “Twitter war”, which it claimed “raised eyebrows on both sides of the Atlantic.”

What started the heated exchange was my response to a tweet by celebrity chef Rachael Ray in which she called “Israeli”—”meze, stuffed grape leaves, hummus, beet dip, eggplant and sun-dried tomato dip, walnut and red pepper dip and tabouli.”

I hadn’t intended a war, but my blood boiled when I saw Ray’s tweet and so I tweeted a response—”Damn it! This is cultural genocide. It’s not Israeli food. It’s Arab (Lebanese, Palestinian, Syrian, Jordanian, etc). First, the Israelis take the land and ethnically cleanse it of Arabs. Now they take their food and culture and claim it’s theirs too! Shame.”

(I should note that this wasn’t the first time that Ray became embroiled in a situation that involved a negation of Palestinian/Arab culture. Back in 2008, she appeared in a TV ad for Dunkin’ Donuts sporting what appeared to be a keffiyeh. After a barrage of attacks by right-wing Islamophobes who said the scarf was a symbol of “murderous Palestinian jihad”, Dunkin’ Donuts cancelled the ad. Because that entire affair evolved so rapidly and the company reacted so quickly, we were unable to offer a rejoinder. The recent flap, however, “cut to the quick.” I had to reply. And so I did.

The responses to my tweet were immediate, involving attacks by prominent American and Israeli columnists and the head of an American Jewish organization. Most criticisms were downright silly, some were threatening (demanding that I be expelled from the Democratic Party), while others were just crude insults (“ludicrous”, “anti-Semitic bigot”). All of them missed the point.

The silly ones either wanted to reduce the entire brouhaha to “who invented hummus” or confused cultural exchange and sharing with outright appropriation. No, I noted, making pizza or spaghetti in the U.S. is not cultural genocide, unless the U.S. were to occupy Italy and then claim these foods as “American.” And I responded to the foolish tweet by New York Times columnist Bret Stephens that if I used Instant Messaging or Waze (both of which were invented in Israel), I would not be engaging in cultural appropriation unless I used them, then claimed these tools as my own and started referring to them as Lebanese inventions.

Of course, I recognize that a significant number of Israelis come from Arab countries and I realize that they brought their cuisine with them from Yemen, Iraq, Morocco, Egypt, etc. But that doesn’t make Yemeni, Iraqi, Moroccan, or Egyptian dishes “Israeli”, any more than pizza, tacos, sushi and fried rice can be called “American” simply because Italians, Mexicans, Japanese and Chinese brought them to the U.S.

And no, my argument is not anti-Semitic; nor does it imply a rejection of the existence of Israel. In fact, what prompted my reaction was Israel’s denial of a Palestinian people, appropriation of their land and now of their culture.

With the creation of the State of Israel, hundreds of thousands of Palestinians were expelled and denied the right to return to their homes and properties. The new state then confiscated their businesses and lands and demolished 385 Palestinian villages. As Yousef Munayyer noted, it was Israel that sought to systematically erase Palestinian history—”Place names, street names, historical markers were changed. Forests have literally been planted above the ruins of our villages, obfuscating the very remnants of our history and the grave of our ancestors.”

So this “Twitter war” was never about the denial of Israel’s existence. It was about Israel’s denial of Palestinian existence— a process that continues today within Israel and, in an increasingly aggressive way, in the occupied West Bank. For example, Bethlehem’s Jabal Abul Ghneim, a once green hill to the north of the town, has been confiscated by Israel and walled off from Bethlehem’s residents. It is now the site of the illegally built Jewish-only colony of Har Homa (that houses almost 20,000 Israeli settlers), and has been incorporated into what Israel refers to “Greater Jerusalem.”

It was, therefore, not “who invented hummus” that caused me to react. Rather, it was Israel’s appropriation of Palestinian land, eradication of their presence and now the effort to be the sole claimants of their culture that prompted my response to Ray’s “Israeli food” tweet. This was cultural appropriation by conquest.

I have long connected this Palestinian reality to my experience growing up in central New York State. Once the home of the tribes of the Iroquois Nation, traces of their history and culture were always with us. Some towns bore Indian names. Families would vacation at the fashionable Mohawk resort. As children, we would dress up as “Indians” at Halloween. As Boy Scouts, we learned “Indian dances” and competed to achieve the status of the “Order of the Arrow.” All the while, the remnants of that once powerful people were locked in poverty on a nearby reservation. Their children were taught to deny their heritage and customs and learned the lesson that when they asserted their rights, they were reviled with epithets like “damn Redskins.”

Another personal experience comes to mind: Four decades ago, my children went to a Halloween party at the elementary school they were attending in suburban Washington. I remember how upset they were that other children were dressed as “Arabs”, some carrying oil cans or toy guns. A few weeks later, the school hosted an “ethnic festival” and asked the children to dress in their ethnic attire and to bring food representing their heritage. Because of their Halloween experience and the taunting they sometimes endured, my children said they would go to the event, but were hesitant to dress up or bring anything that would associate them as being of Arab descent. At the event, we noted a table set up with a card saying that it was “Israeli”, featuring hummus, baba ghanouj and tabouli. Behind the table was a young girl in a lovely embroidered dress—the pattern of which was unique to Ramallah.

And so what troubled me then, and still troubles me, are the parallels with the Native American experience. Their land had been taken, their history and rights were denied and now their culture was claimed by the very people who dispossessed them. This according to Article 8 of the United Nations Declaration on the Rights of Indigenous Peoples is termed “genocide.”

If Israelis and Palestinians are to coexist in peace— and I pray they will— it must be based on respect. That means that efforts to eliminate the Palestinian reality must end, their rights must be recognized and restored and respect must be shown to all of the cultures that now mix in the Holy Land—Israeli Jewish (from lands East and West) and Palestinian Arab.

-James Zogby is the president of the Arab American Institute in Washington, DC.