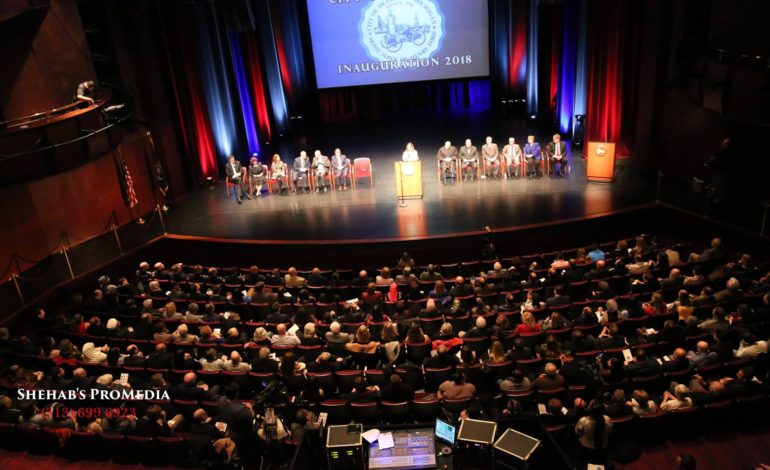 DEARBORN — During the inauguration ceremony for Dearborn city officials on Jan. 9, Mayor Jack O’Reilly told the audience that Dearborn is a unique community.

“I have to tell you there aren’t communities like Dearborn all over the place, said O’Reilly, who was sworn in for his third full term. “There aren’t people that come together like we do. The school districts and the colleges do not have to relationship we have with each other, we are connected. All through our community we are blessed with that.”

We’re going to continue to put Dearborn where it is the most successful place around. We are going to be in charge of our destiny. And we do it together. – Dearborn Mayor Jack O’Reilly

“We’re going to continue to put Dearborn in the position where it is the most successful place around,” O’Reilly added. “We are going to be in charge of our destiny. And we do it together, all of us, we come together. We listen to everybody and then we do what we need to do with the resources we have that’s going to have the greatest impact. That’s my commitment to you and that’s what, I believe, is going to make Dearborn continue to be a place that stands out.”

The City Council also saw an increase in women members in the last election, a fact Byrnes, a first term councilwoman, pointed out in her speech.

“At this point, for the first time in several decades, we have three women serving on our city council,” Byrnes said. “I think that is especially poignant right now because we know we are having a national conversation and that women’s stories and experiences and voices are being heard in a collective way that certainly hasn’t happened [before] in my lifetime. I’m very honored to be a part of that movement and that forward momentum.”

Byrnes expressed her excitement to work with every member of the community to continue to move Dearborn forward.

Darany told the audience his job description, “goes beyond running a smooth election and providing good customer service in the clerk’s office.

“To that description I’ve added restore public confidence in elected officials,” he said. “My outstanding staff and I will provide more transparency, greater accessibility and more communication to our residents.”

Councilman O’Donnell shared his optimism about the city.

“I gotta tell ya, the city of Dearborn is in such a wonderful position at this point,” he said. “Our economic possibilities look great, our investment looks great. If we do our jobs right, if we continue to make wise decisions not only now, but our children and our children’s children well into the future will have a wonderful place to live, work and play.”

Councilwoman Herrick thanked the audience and expressed humbleness that she was serving her hometown.

Councilmember Abraham, who is beginning his fifth term, was anointed the dean of the Council upon the retirement of Shooshanian, who’d previously been the longest serving member. Abraham shared a historical perspective on where Dearborn has come since the auto industry failed shortly after Mayor O’Reilly was first sworn in to complete Mayor Guido’s term in 2007.

“For most people, it seemed that Dearborn was doomed,” Abraham said. “But with our strong leadership and support from our entire community; everybody dug in, we prepared and we sacrificed. We needed to do more with less and we did. We did it without jeopardizing public safety; we did it without cutting police and we did it without sacrificing our fire department. I think that is commendable and I don’t think many communities can say that.”

Councilman Bazzy said the tough love his late mother, who died last year, and his family gave him propelled him be who he is today. He said that family structure makes him want to give back to the community, adding that it is a “passion and a commitment.”

Councilman Sareini told the crowd there’s no better feeling than helping somebody who can’t help themselves.

“Success is not measured in material things, but what really matters is kindness, compassion and the relationships that you have with others,” he said

Councilwoman Dabaja said the most important lesson she has learned during her time serving Dearborn is the power of community.