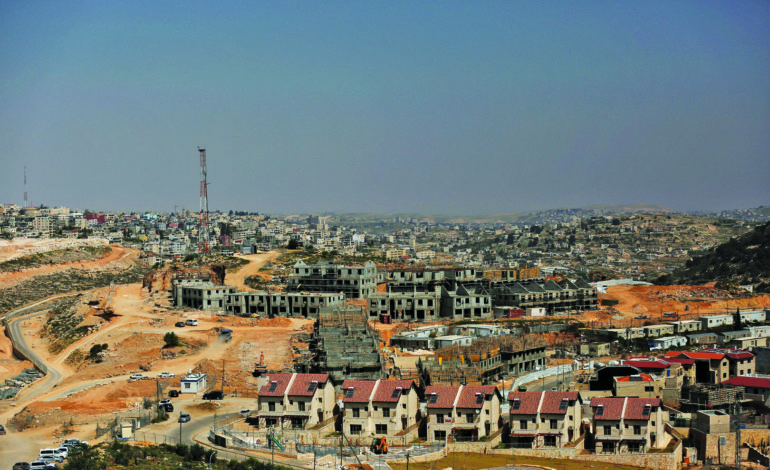 Buildings under construction are seen in this picture of the Israeli settlement of Efrat, in the occupied West Bank Mar. 26 - File photo by Reuters

WEST BANK — The Israeli government has given its final approval for 352 homes in illegal settlements in the occupied West Bank, an anti-settlement movement said on Thursday — construction that Palestinians see as jeopardizing their prospects for an independent state.

The Peace Now group said a meeting on Wednesday by a planning committee of Israel’s military-run Civil Administration for the West Bank also moved plans for 770 other settler homes to more advanced stages.

Settlements are one of the most heated issues in efforts to revive Israeli-Palestinian peace talks, frozen since 2014.

“I think what Israel is doing is a purposeful, well-planned process of destruction of the two-state solution and possibility of the establishment of a Palestinian state,” Mustafa Barghouti, a Palestinian lawmaker, said of the committee’s decision.

Palestinians want the West Bank for a future state, along with East Jerusalem and the Gaza Strip. The international community considers as illegal the settlements Israel built in the territory it captured in the 1967 Middle East war.

Some 500,000 Israeli settlers live in the West Bank and East Jerusalem, areas that are home to more than 2.6 million Palestinians.

Hagit Ofran, a Peace Now spokeswoman, said the new round of construction approvals was “not a dramatic change” from last year’s pace, when Israel gave the go-ahead for 6,742 housing projects in the West Bank — a figure described by Peace Now as the highest since 2013.

But she noted that many of the latest housing projects were slated for settlements deep inside the West Bank, “especially in places that Israel would need to (evacuate) in case of a (peace) agreement — which means our government is trying to prevent a two-state solution.”

Barghouti linked the increased settlement activity to the 2016 election of President Trump, a Republican who has been less critical of Israel on the issue than his predecessor, Democrat Barack Obama.

“These settlements could have been stopped by the United States,” he told Reuters.

Asked about them, a U.S. State Department official said on Tuesday there had been no change in policy on settlements and the Israeli government had made clear that going forward, “its intent is to adopt a policy regarding settlement activity that takes the president’s concerns into consideration.”