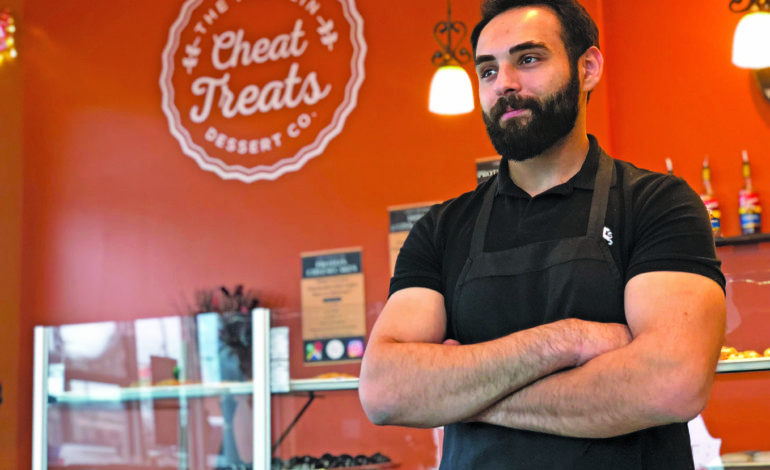 Some of the doughnuts offered at Cheat Treats

DEARBORN — According to Ali Hachem, owner of Cheat Treats, The Protein Dessert Co., his establishment’s sweet treats are actually good for you.

“Everything I make is high in protein and low in sugar,” Hachem told The AANews. “There’s nothing hidden in there, it’s all out there.”

Cheat Treats, located at 5828 Schaefer Rd., had its grand opening on January 5. Hachem proudly displays the ingredients and nutritional labels for the treats he sells.

The protein cheesecakes consist of low fat, low sugar, coconut oil, stevia leaf extract and seven sources of milk-derived proteins. A simple recipe that was not so easily discovered.

The inspiration for making them came from when he went on a diet while completing his undergraduate education at Eastern Michigan University. He wanted to knock out the sweet tooth one gets when on a diet.

“I used to weigh a lot; I was a heavy-set kid,” he said. “I did lose a lot of weight, drastically. During that weight loss, I wanted to eat sweets, but I couldn’t because I was sticking to my diet.”

He began trying to bake all the different ingredients he was researching to make a healthy dessert high in protein.

“In the beginning, they weren’t turning out right,” he said. “It was making me go crazy. It was a good year of trial and error.”

Ali said he tried out many things to get everything from the texture to the taste right. Once he succeeded, his friends began to notice and the demand for healthy cheesecakes went up.

He would make a cheesecake for himself and his friends would come over and eat it up before he could even get a slice.

“People would call me at 2:30 in the morning asking if I could make them a cheesecake,” Hachem said.

He then began selling them out of his home and through Instagram. Four years and a degree in International business and supply chain management later, Hachem is now celebrating the grand opening of his first store.

Even though it all started with cheesecakes, Hachem now also makes doughnuts, cinnamon rolls, cookies and edible cookie dough. He researches all of his ingredients for their health benefits.