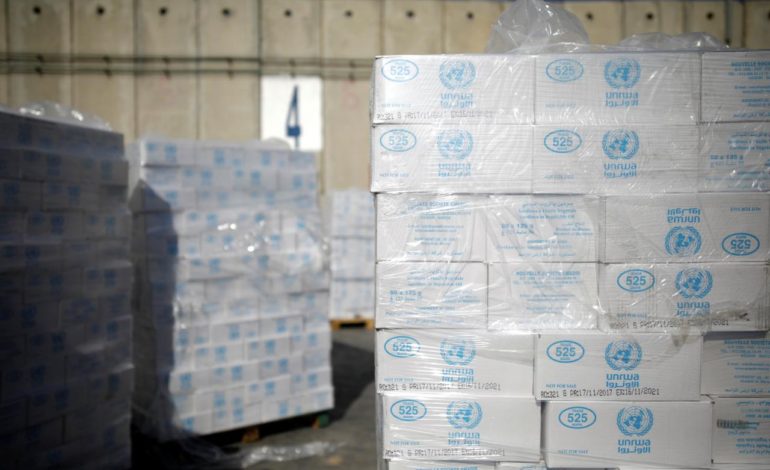 Boxes containing aid from the U.N. Relief and Works Agency (UNRWA) are seen ahead of their transfer to the Gaza Strip, inside the Kerem Shalom border crossing terminal between Israel and Gaza Strip January 16, 2018. REUTERS

WASHINGTON – The United States will give a U.N. agency $60 million in aid for Palestinians but will withhold a further $65 million “for future consideration,” a U.S. official said on Tuesday.

In keeping back some of the aid, Washington appeared to carry out a threat made by President Trump in a Twitter post on Jan. 2 in which he said that Washington gives the Palestinians ”HUNDRED OF MILLIONS OF DOLLARS a year and get no appreciation or respect.

“They don’t even want to negotiate a long overdue peace treaty with Israel … with the Palestinians no longer willing to talk peace, why should we make any of these massive future payments to them?” Trump added in his tweet.

The U.S. official, who spoke on condition of anonymity, said the United Nations Relief and Works Agency (UNRWA) that will receive the money needed to be fundamentally reevaluated “in the way it operates and the way it is funded.”

While the official did not link the U.S. decision to Trump’s tweet, he made a point often advanced by the U.S. president by saying the United States had been UNRWA’s single largest donor for decades and calling on other nations to do more.

“It is time other countries, some of them quite wealthy, step in and do their part to advance regional security and stability,” the official said.