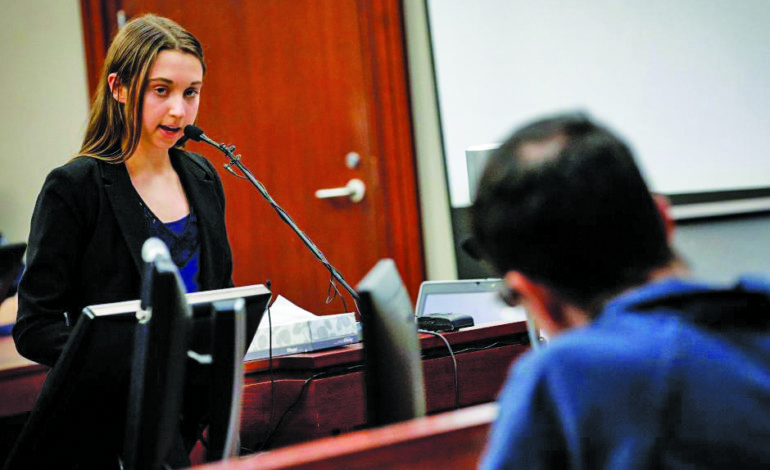 Stephanie Robinson, a former gymnast, speaks during a sentencing hearing for Larry Nassar in Lansing, Jan. 17

LANSING — A coach who sent dozens of young girls for treatment to USA Gymnastics team doctor Larry Nassar, who pleaded guilty to molesting female athletes, told the disgraced physicians on Wednesday to “go to hell” for his crimes.

Thomas Brennan, a youth gymnastics coach, confronted Nassar in a Michigan courtroom on the second day of a sentencing hearing for the former doctor, who pleaded guilty in November to multiple counts of sexual assault.

Brennan’s outburst came as he stood next to one of Nassar’s victims, Gwen Anderson, as she recounted the molestation she suffered Nassar’s hands of Nassar.

At one point during Anderson’s tearful testimony, Brennan barked at Nassar, “Look at her.”

Nassar sat through the proceedings with his head bowed, not making eye contact with the victims. He apologized for his crimes at the November hearing, local media reported.

Brennan told Ingham County Court Judge Rosemarie Aquilina that he sent more than 100 girls to Nassar, whom he once considered a mentor.

“The guilt I feel for that is hard to fathom,” he said.

More than 100 victims are providing victim-impact statements during the four-day hearing, prosecutors said.

The judge has addressed each victim and repeatedly said she will make certain Nassar gets a lengthy prison sentence. Prosecutors are seeking a life sentence.

Nassar is already serving a 60-year prison after pleading guilty in July to child pornography charges in federal court.