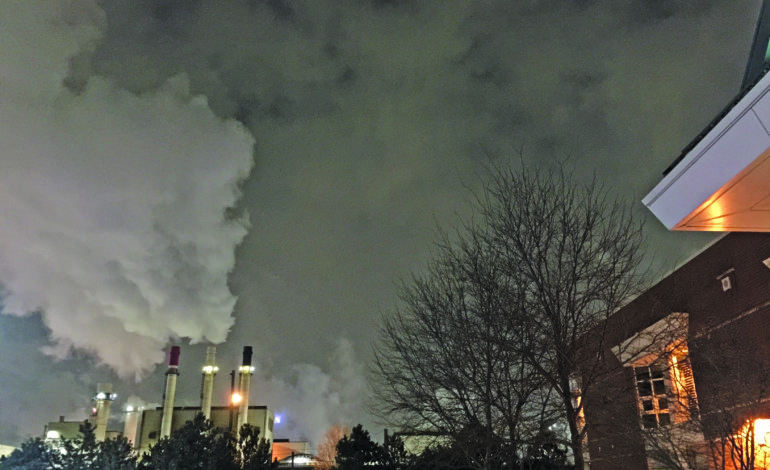 DEARBORN — While some communities around the United States are fighting for a livable wage, people in the Southend continue to fight for a livable troposphere.

An overflow crowd turned out at Salina Elementary School Jan. 16 to participate in a public hearing regarding Dearborn Industrial Generation’s application for a permit to install “a new simple-cycle natural gas-fueled combustion turbine generator”, according to documents provided by that company.

The Michigan Department of Environmental Quality (MDEQ) held the meeting in the school’s library, which turned out to have inadequate seating for the approximately 150 attendees.

Jenifer Dixon, air quality specialist and the facilitator for the evening, told The AANews the MDEQ didn’t anticipate the large crowd.

DIG filed for a permit to add an additional turbine and to raise the emissions limit for formaldehyde emissions.

The hearing consisted of a PowerPoint presentation describing the permit, a question-and-answer session and a recorded comments session.

The MDEQ will review the comments before making its decision on whether to approve the permit. State Rep. Abdullah Hammoud speaks during the recorded comments portion of the public hearing – Photo by The AANews / Steve Martin

At least five times during the PowerPoint presentation and the question-and-answer portion of the hearing, attendees yelled that they couldn’t hear what was being said and requested a higher volume or a larger venue.

Asked about the high asthma rates in the Southend, Sills maintained that there was no real way to determine exactly how area residents get asthma.

Sills acknowledged studies by the state health department that the Southend has higher rates of asthma, but also said there are many other causes of asthma other than the chemicals DIG produces.

He did, however, concede those chemicals are part of the problem.

A nurse at Beaumont Hospital in Dearborn directed a question to Lynn Fiedler, director of the Air Quality Division for MDEQ, who was not on the panel. The nurse, a lifelong Dearborn resident, asked why Fiedler was the decision maker in the process, as described in a flier handed out at the event. The nurse asked if she lived in the community.

Although Fiedler said she was only there to hear the public’s comments, she did reply that she lives in lives and works in the Lansing area.

“I would hope that the decision maker lived in the community and was directly affected by all of the crap that we’re breathing in,” the nurse said.

She also said that in her estimates 85 percent of her patients have asthma and a little more have chronic obstructive pulmonary disorder (COPD).

The nurse also asked the panel what it would take for the permit to not be passed.

“You would need to find something technically wrong with the permits that we have written,” Byrnes said after the panel remained silent for about 45 seconds. “Because, as we see them, they do meet all the state and federal regulations, whether you like to hear that or not.”

The crowd then erupted, with one man yelling louder than the rest, “Everything they’re saying is a crock.”

He also said the residents would reject the permit and fight it if it’s passed.

“We will hold you responsible,” he said.

Dixon thanked him and told him that while what he said was great, comments during the question-and-answer time were not recorded.

Another man said the city and state will go through with the permit regardless of what was said at the public hearing.

Soon after, the comments portion of the event began. People were given three minutes to speak their minds. Tracy Kecskemeti, MDEQ district supervisor, and Fiedler, the panelists for this portion of the hearing, took notes, but did not engage in dialogue.

Hammoud said all you have to do to realize how high the level of pollution is in the Southend is drive down Miller road, open your mouth and taste the pollutants and smell them in your nose.

“Seventy percent of the households in this neighborhood are low-income households,” he said. “In addition to that, 60 percent of which have limited to no English proficiency.

Hammoud also said the idea of morality needs to be brought up rather than just legality when considering such permits.

According to Hammoud, many in the immigrant population in the area don’t receive public benefits. Those who go bankrupt do so because of medical bills. He said that he does not foresee either MDEQ or DIG paying for the inevitable medical bills that will come to these families.

Hammoud urged the MDEQ to reject the permit and tell DIG to seek renewable energy as its new source of energy. Tlaib, a former state representative in Detroit, requested the decision maker look at the communal impact the pollutants will have. She also reminded the MDEQ that everything it does is delegated by the Environmental Protection Agency.

“I don’t give s— about Trump or what he thinks,” Tlaib said. “There is still a Clean Air Act and we still have to follow it.”

She closed with a warning to the MDEQ to forward all emails from the Snyder administration or other political emails that may be trying to influence the decision in order to protect the staff. She told them she wanted to help them so they don’t go to jail for manslaughter like someone working under Gov. Snyder did during the Flint water crisis.

Woronchak, who is also a state senate candidate, spoke about an overly broad rule that doesn’t allow the MDEQ to take into account the popularity of an issue when considering it.

“These people are simply worried about being able to breathe,” he said.

A Salina teacher also spoke. She said she and her colleagues were not notified of the hearing. In her case, she learned about it through social media.

She also described noticing that many of her students routinely missed school because of sickness.

“They’re always sick and now I know why,” she said.

Some citizens said they felt the Southend was being neglected and that the safety of their air is and has been compromised since Henry Ford opened his first plant.

One young man spoke of his childhood memories of being tainted in orange dust from the pollutants.

Another requested that the decision maker be required to live in the area for one month to feel the damage, expressing his amazement that he and his community needed to get together in 2018 to tell the MDEQ that they do not want to be poisoned.

A few citizens spoke of washing their cars in the evening and waking up in the morning to have them covered in pollutants.

“Only in the Southend is the sky never blue, only grey,” one man said.

New Michigan Media (NMM) is the collaboration of the five leading minority media outlets in the region. The New Michigan Media Newspapers have a combined estimated reach of more than 140,000 weekly, and include The Latino Press, the Michigan Chronicle, the Jewish News, the Michigan Korean Weekly and The Arab American News.  For the past three years, NMM has also been a member of the Detroit Journalism Cooperative (DJC), the unique collaboration between some of the leading media outlets of the region, which includes The Center for Michigan’s Bridge Magazine, Detroit Public Television, Michigan Public Radio and WDET. Funded by the John S. and James L. Knight Foundation, the DJC aims to report about and create community engagement opportunities in Detroit and the region. The article you are reading is part of the DJC project of this year and will appear in all the NMM member newspapers, as well as with the DJC partners.