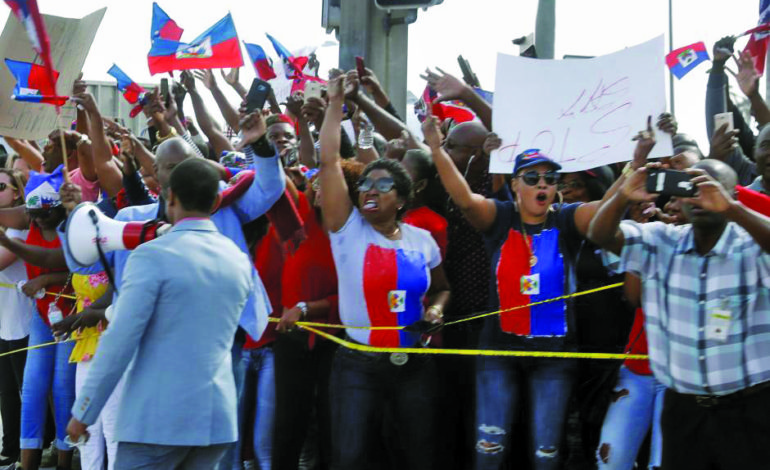 Demonstrators hold up Haitian flags and shout as the motorcade of President Trump passes in West Palm Beach, Florida, Jan. 15 - Photo by Reuters

WASHINGTON, D.C. — Haitians will no longer be eligible for U.S. visas given to low-skilled workers, the Trump administration said on Wednesday, bringing an end to a small-scale effort to employ Haitians in the United States after a catastrophic 2010 earthquake.

The Department of Homeland Security (DHS) announced the change less than a week after President Trump reportedly questioned in an Oval Office meeting why the United States would want to take in immigrants from Haiti and African nations, referring to them as “shithole” countries. Trump has denied using that word.

DHS said in a regulatory filing that it was removing Haiti from lists of more than 80 countries whose citizens can be granted H-2A and H-2B visas, given to seasonal workers in agriculture and other industries.

It cited what it said were “high levels of fraud and abuse” by Haitians with the visas, and a “high rate of overstaying the terms” of their visas.

A DHS report published last year stated that Haitians on a variety of non-immigrant visas, including H-2As and H-2Bs, had a roughly 40 percent visa overstay rate in the 2016 fiscal year.

Supporters of the visas say they gave Haitians a rare opportunity to work legally in the United States, contribute to the U.S. economy and help fund the recovery of Haiti after the earthquake, which killed more than 200,000 people.