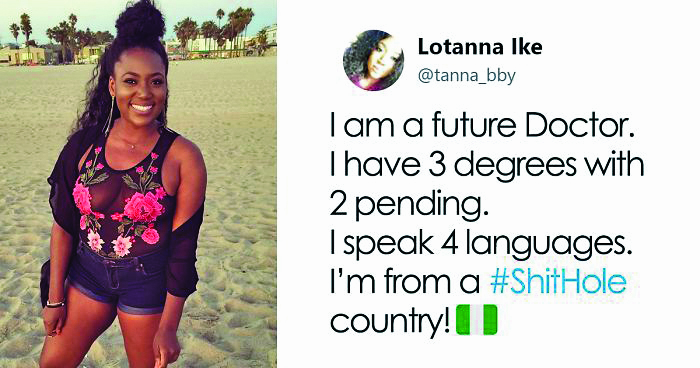 It’s quite popular these days to declare that Donald Trump’s racist views on immigration are “un-American.”

He only wants White people coming here. “Why can’t we have more people from Norway?”

He wants to get rid of Latinos and Black people. “Do we really need more Haitians?”

He devalues, denigrates and dehumanizes the culture of Africans. “They come from shithole countries.”

You can just hear well-meaning Americans. “That’s not American!” “That isn’t who we are as Americans!” “The founding fathers would have never stood for that!” Um… yes, they did.

Explicit racial requirements were finally dropped from American naturalization laws in 1952. That’s when Congress passed the McCarran-Walter Act, the law that laid the basic frameworks for our current immigration system.

At the founding of this nation, after writing a Constitution and electing a first Congress and president, the pioneers of the American idea had to decide something quite important. They had to figure out who all these new rules applied to. Who would get to be citizens? Who would get to be “Americans”?

So, on March 26, 1790, the first Congress of the United States declared that a person could become a naturalized citizen of this new nation, as long as they were “of good character”, a resident “for the term of two years” and, quite importantly, “a free White person.” Yes, you had to be White to become an American, then. This notion was not some aberrational social custom. Nor was it confined to certain pockets of this new and expanding America. It was the law of the land. Whiteness was legality.

The naturalization laws were modified a bit over the years. The residency requirement changed every now and then. After the Civil War, the Fourteenth Amendment provided that, “All persons born or naturalized in the United States, and subject to the jurisdiction thereof, are citizens of the United States”, although it took a Supreme Court case in 1898 to confirm that this applied to non-White persons. All former Black slaves became American citizens, confirmed in the Civil Rights Act of 1866.

American legal history also witnessed the exclusions of entire populations (the adorably-titled “Chinese Exclusion Act” of 1882), quotas based on national origin (in 1921 and 1924) and a number of other immigration (and anti-immigration) measures.  Despite all these ups and (mostly) downs, naturalization laws, true to their origins, unrelentingly continued to trumpet “Whiteness” as a requirement.

During this era, a number of individuals petitioned for Whiteness from American courts. A Japanese guy (unsuccessfully); a man from India (unsuccessfully), a Chinese person (unsuccessfully), some Armenian guys (successfully, that’s how we got the Kardashians), a half-European, half-indigenous gentleman from Canada (he wasn’t “White” enough for naturalization). And a bunch of Arabs (“White” enough, sort of, if they were Christian and close to Europe, but basically, kind of).

Explicit racial requirements were finally dropped from American naturalization laws in 1952. That’s when Congress passed the McCarran-Walter Act, the law that laid the basic frameworks for our current immigration system. So, from 1790 until 1952, “whiteness” was the prime determiner in American naturalization eligibility. Think about that for a minute. 162 years of whiteness as the legal bedrock of American immigration policy. Only 66 years of its statutory absence.

Now, of course, the authors of these historical racist immigration laws were much more rhetorically cultivated than our current president. Ideologically, however, he would have fit in with them just fine. Similarly, today, President Trump clumsily professes white supremacist immigration ideals, supported by a political party that largely agrees with his stances, just much more articulately.

We would be well-served to recognize this history. The marriage between citizenship and race is in the DNA of America. When someone who was not a “free White person” was denied citizenship, he was not simply the victim of an incident of isolated bigotry. He was the intended target of the law. To be nonwhite was to be illegal. And sadly, but quite starkly, those days dominate our history. They were not, as we might like to fantasize, a blip.  In 1992, Toni Morrison put it quite succinctly: “In this country, American means White.”

So, are Trump’s views on immigration racist? Definitely. Are they un-American? Our history says quite the opposite.

-Amer Zahr is an Arab American comedian, writer and adjunct professor at University of Detroit Mercy School of Law.