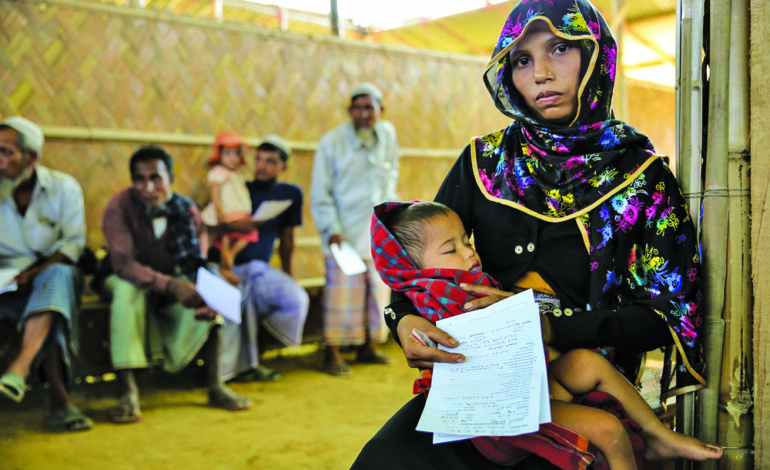 A mother and child wait at Tasnimarkhola camp, Bangladesh - Photo by Mohammad Ghannam/MSF

BANGLADESH — In light of the Rohingya refugee crisis where hundreds of thousands of refugees fearing religious prosecution in Myanmar fled to Bangladesh, the Doctors Without Borders/Médecins Sans Frontières (MSF) arrived in Bangladesh at the beginning of the current crisis to aide refugees living in conditions that lack in basic human sustenance.

The MSF is a worldwide organization that aides countries in need through delivering emergency medical aid to people affected by conflict, epidemics, disasters or exclusion from health care.

“I have never seen anything of that magnitude before,” said to Ihsan Ghadieh, an Arab American logistics manager with the MSF team that arrived in Bangladesh at the beginning of the crisis. “People are managing themselves by themselves, where the hygiene situation is so bad; and although a lot has been done, it is not enough because of the unprecedented amount of refugees arriving in a short span of time.”

The MSF has aided the Rohingya for more than a decade, but the crisis has currently escalated to a new level. Ghadieh, a former Dearborn resident, stated that the MSF team has managed to open three hospitals in one month, but it’s still not enough because of the intensity of the situation.

“The Rohingya refugees in Bangladesh are lacking every human right’s needs, where 800,000 people are living in a slum,” he said. “The MSF expanded a lot of the clinics and contributed through hospitals and else, but because of the large refugee numbers there’s still work to be done.”

Ghadieh added that he had previously worked in northern Iraq and in other areas with Syrian refugees, but he’s never seen anything like the Rohingya crisis.

He told The AANews that the MSF is open to volunteers because there is always a need for personnel.

“Arabic speakers are especially needed because of the ongoing crisis in the Middle East,” he added.