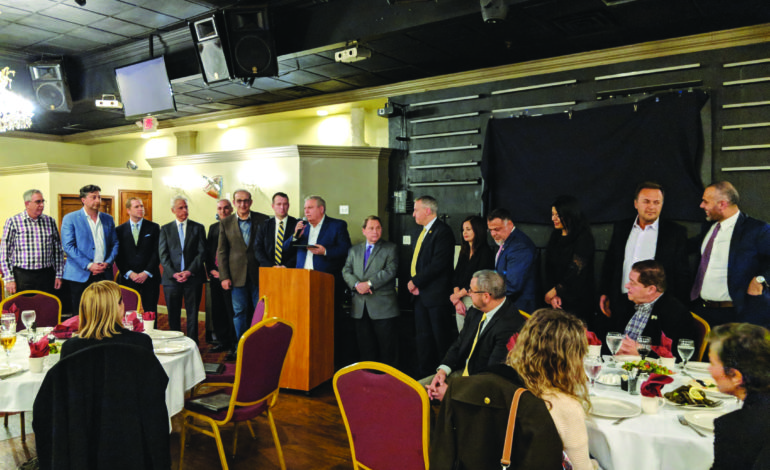 DEARBORN — “Unparalleled” leadership, community outreach and the ability to fight crime are what local Arab Americans will miss about FBI Special Agent in Charge David Gelios.

Those qualities are why former FBI Director James Comey named Gelios head of the Detroit division in September 2015, and what has helped Gelios form deep relationships with communities across southeast Michigan.

But on Monday, January 22, Arab Americans, as well as local judges, officials in the U.S. Attorney’s Office and others bid Gelios farewell at La Pita Restaurant in Dearborn. The ceremony, organized and emceed by The AANews Publisher Osama Siblani, celebrated his efforts in curbing ethnic and minority communities’ skepticism and fear of the federal agency.

“Thank you for coming to honor a good friend, a leader that we have become so acquainted with,” Siblani said in opening remarks. “In the short time he’s been here, we’ve considered him one of us. He has his way to go into the hearts of people.”

He said that relationship was born out of the need for Arab and Muslim Americans to shed misconceptions, so they can wholeheartedly contribute to and serve their nation and eliminate hostile sentiments between the community and federal law enforcement, given their contentious history.

On one hand, Arab and Muslim Americans are often seen as “trouble makers” and potential terrorists, and on the other, the FBI is distrusted for its history of controversial policies that began with its founder J. Edgar Hoover.

“We decided that we wanted to break the ice and communicate directly with the FBI,” Siblani said. “We have a very bad reputation out there…so we decided there’s nothing in here to hide. In fact, when we open up, people see who we are as a community.”

He lauded Gelios’ keenness on learning about the community and his efforts to attend functions, including every BRIDGES meeting and Sunday brunches with local leaders at the restaurant, sometimes with his wife, son and daughter.

BRIDGES (Building Respect In Diverse Groups to Enhance Sensitivity) is a quarterly forum that launched after the September 11 attacks for communication among government agencies and the Arab, Muslim and Chaldean American communities.

Gelios, who turns 57— the mandatory FBI retirement age— in September, decided to step down effective Jan. 31. He said he will be moving to California to work as vice president of security at Penske Corporation, a transportation services company whose subsidiaries operate in industries including retail automotive, truck leasing and transportation logistics. The company’s main office is in Bloomfield Hills.

Gelios told The AANews his success counted on building bridges and offered some advice for his yet-unannounced successor.

“Prioritize getting to know the communities we serve,” he said. “This is a wonderfully diverse area and the key to our success in the future is building trusting relationships with the people we serve. Collectively as a group, we do more to effectively protect America.”

He said it took him some time to get to understand the community, adding that he’s treated learning about different cultures as a college degree. Publisher Osama Siblani presents Gelios with an award for his service

“I’ve grown in my understanding and my appreciation,” Gelios said. “People like to divide groups by ethnicity, etc. The more you get to know people, the more you see those lines are blurred and we all have the same interest for our families, for our careers and for our safety.”

“We face some serious problems and we won’t be successful if there are significant segments of the community that don’t trust the FBI as an organization or worse, skeptical of some of the people of which we serve,” he said. “My time here has proven to me that we’ve all in this together.”

Retired Chief Judge Gerald Rosen of the Eastern District of Michigan said Michigan was fortunate to have Gelios’ leadership at the FBI, as he is a “uniquely talented guy” who was always willing to listen and follow the evidence and develop the facts.

“His integrity, his thoroughness, his attention to detail and most of all his fairness of mind exemplifies what is so good about the FBI,” Rosen said.

He also noted how Gelios made efforts to become part of the community.

“What David was able to do was reach across and into the community and touch people’s lives,” Schneider said, adding that it was a mission he hopes to follow himself.

Abed Hammoud, assistant U.S. Attorney for the Eastern District of Michigan, who had worked with previous directors of the FBI’s Detroit office, said he saw a noticeable positive difference while working with agents under Gelios’ leadership.

Daniel Lemisch, who’d served as the acting U.S. Attorney for the Eastern District for the past 10 months and worked with Gelios on several cases during that time, called Gelios a friend and a leader who brought many Southeast Michigan communities closer.

Lemisch took office following Former U.S. Attorney Barbara McQuade’s resignation. She had been the head of the office since 2010 and is among 46 federal attorneys and prosecutors who stepped down last March at Trump’s request.

He said that beyond the work, Gelios knows that an effective law enforcement officer requires the trust of community members, often who feel they are unjustly being examined.

“Judging by the outpouring of affection and respect and love in this room for Dave, he has succeeded in his goal of making sure that the police and federal law enforcement act fairly and act constitutionally,” Lemisch said.

As a testament to that, Nabih Ayad, the lead attorney of the Arab American Civil Rights League, presented Gelios with an award on behalf of the group as a, “special tribute for service and companionship to the Arab American community.”

Gelios told those gathered at La Pita that his service “started out as a job, but it has really been the development of a family.”

On behalf of the Arab American community, Hammoud also awarded Lemisch, “whose office you always go to when there is a crisis,” for his service

Although the FBI serves as a safeguard to national security, Gelios’ appointment in 2015 signaled a shift in the FBI’s focus in its Detroit office from counterterrorism efforts to fighting crime.

Previous top agents in the Detroit division had extensive background in national security. Gelios’ predecessor, Paul Abbate, served as special agent in charge of the Counterterrorism Division in the Washington Field Office before joining the Detroit division. By contrast, Gelios started his FBI career in 1995, mostly focusing on combating crime in Kentucky, California, Connecticut, Alaska and Washington, D.C.

During his tenure in California, Gelios served on the evidence response team and was trained as a crisis negotiator. In Connecticut, he was program manager of New Haven’s critical incident management program and SWAT Team.

Lemisch attested to Gelios’ crime fighting skills and pointed to some of the most noteworthy cases investigated during his tenure, including when Takata, a leading airbag manufacturer, committed international fraud when it was found to have “cooked the books” to hide faulty parts, which are used in 2,900 Ford pickups, and caused 21 deaths.

Takata said in June that it has recalled, or expected to recall, about 125 million vehicles worldwide by 2019, including more than 60 million in the United States. Its inflators can explode with excessive force, unleashing metal shrapnel inside cars and trucks and have also injured more than 200. The company is now also a felon and was fined $1 billion.

Lemisch added that Gelios’ office helped indict 19 individuals involved in public corruption in Macomb County, 15 of whom who have pled guilty. five of those are public officials.

The ceremony ended with Osama Siblani presenting Gelios and with an award for his service on behalf of Michigan’s Arab American community.