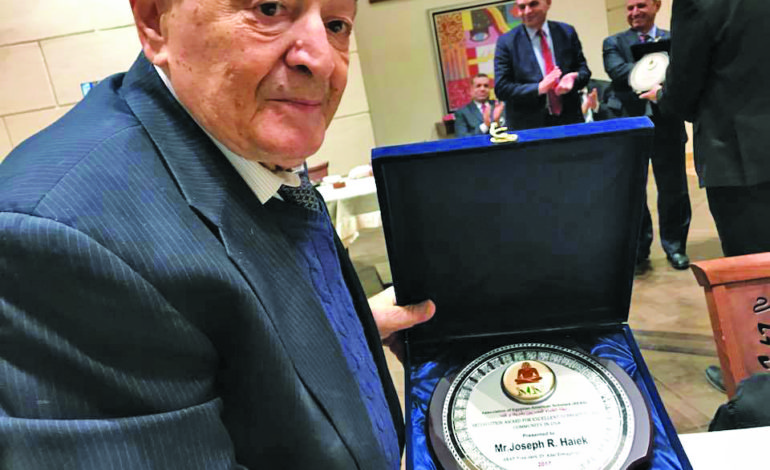 Joseph R. Haiek displays the award he received from the Association of Egyptian American Scholars (AEAS) on Dec. 27 during its 44th Annual Conference

LOS ANGELES — Joseph R. Haiek, 85, a well known Arab American historian and journalist who spent his life documenting the achievements of our community in this country, died on Thursday, Jan. 25, according to his family.

“It is with great sadness that we announce the death of our father, Joseph Rizek Haiek, this morning, January 25, 2018, at 10 a.m. in Cairo, Egypt,” Haiek’s daughter Caterina Haiek, wrote on her Facebook page. “Rest In Peace, Dad. We love you and are going to miss you very much. You’re now reunited with Mom in heaven and our Lord and Savior Jesus Christ! We were honored to have you as our father and grandfather of your seven grandchildren: A peaceful, intelligent, humble, loving man full of integrity.”

Haiek was at the end of a three week visit to Egypt, where he was invited to be honored for his lifetime achievements by the Association of Egyptian American Scholars (AEAS). The award was presented in Cairo on Dec. 27 during the AEAS’s 44th annual conference.

“Our father unfortunately developed pneumonia during the last several days of our three week trip to Egypt (one of his dreams fulfilled), as I took him there to celebrate his 85th birthday on December 28 and to receive a prestigious award by the Association of Egyptian American Scholars (AEAS) on December 27 during their 44th Annual Conference,” Caterina Haiek wrote.

Haiek was instrumental in launching one of the first Arab journalism associations in Glendale Heights, California and in publishing the essential guide to Arabs in America and the Arab American Almanac. He was also founder of the News Circle Publishing House, which also for many years published the magazine “The News Circle.”

Joseph Haiek was born in Jerusalem, Palestine in 1932. After Israeli forces occupied Jerusalem following the 1967 war, Haiek along with his wife, Teresa, immigrated to the United States where he studied marketing at Los Angeles City College and earned a degree in journalism from Californian State University in Los Angeles. In 1972, Haiek founded The News Circle Publishing House, which publishes the Arab American Affairs Magazines.

“We must perpetuate the legacy of our Arab American culture and acknowledge our history and perspectives before we can expect others to respect and recognize our achievements and contributions in America,” Haiek said.

One of his greatest accomplishments was the seminal Arab American Almanac. The 1974 edition had less than 100 pages. When Haiek published the sixth edition in 2010, the Almanac had grown to 608 pages.

Haiek received the Ellis Island Medal of Honor in May 2011 in recognition of his contributions to the nation. The award is recognized by the U.S. Congress and recipients are listed in the U.S. Congressional Record. The medal is designed to pay homage to the immigrant experience, as well as for individual achievement.

“Funeral arrangements will be held in Los Angeles within the next two weeks once he is transported back from Cairo,” Caterina Haiek wrote on Facebook.