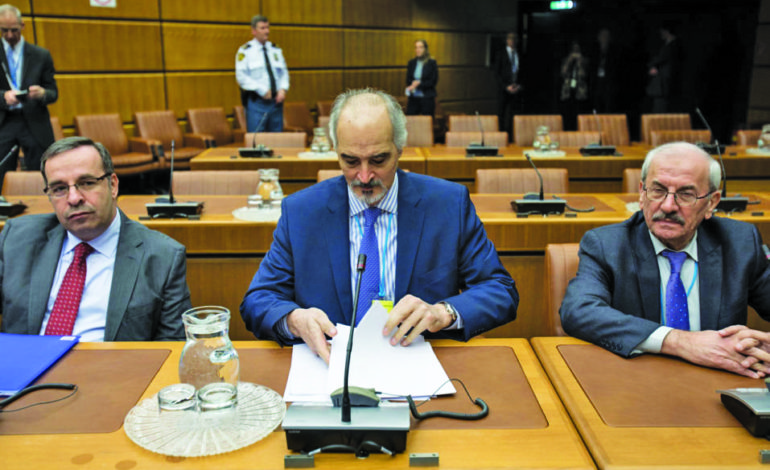 VIENNA — U.N.-brokered peace talks with the Syrian government and the opposition began on Thursday, a few days before separate negotiations hosted by Damascus’s close ally Russia that the West views with suspicion.

“The meeting was good,” the head of the Syrian government delegation, Bashar al-Ja’afari, told Reuters as he left the U.N. offices in Vienna in the afternoon after talks with U.N. Special Envoy for Syria Staffan de Mistura. He declined to elaborate.

An opposition delegation arrived shortly before he left, but there was no sign the warring sides had met. The discussions ended by the early evening and were due to resume on Friday for a second and final day.

Previous rounds of U.N.-sponsored talks have made little progress while Syrian government forces backed by Russia and Iran have gained significant ground since 2015, recovering swathes of the country from rebels.

Government forces are pursuing offensives against two remaining rebel pockets, Idlib in the northwest and eastern Ghouta near Damascus. Turkey has poured troops into the north to fight Kurdish militias that have established regional autonomy and are seen by Ankara as a menace to its security.

Having regained the upper hand in the almost seven-year-old civil war, President Bashar al-Assad appears far from ready to negotiate with his enemies at all, let alone step down as part of any peaceful solution as rebel groups have demanded.

Few expected a breakthrough at the Vienna talks aimed at addressing issues related to a new constitution, but de Mistura has continued to express optimism. “It’s a very critical moment. Very, very critical,” he said on Wednesday.

In eight rounds of talks before this one, de Mistura has not managed to coax the two sides into speaking face to face. It was only at the last round in December that the rebel opposition united in one delegation, raising modest hopes for direct talks.

Russia, Turkey and Iran convened eight Syria meetings in Astana last year, with the stated aim of agreeing to “de-escalation” zones to ease hostilities in western Syria where the three states wield influence.

Russia announced a peace congress in the Black Sea resort town of Sochi after the last meeting in December. De Mistura has acknowledged the Sochi congress but it remains unclear how he plans to address it.

Western and some Arab states believe that Moscow’s initiative would lay the groundwork for a solution more favorable to the Assad government and its allies.

The opposition will decide in the next two days whether to attend Sochi, its chief negotiator Nasr Hariri, said on Wednesday. He said the talks would be a test of all sides’ commitment to a political solution rather than a military one.

Previous rounds have taken place sporadically in Geneva, with a mandate to discuss new elections, reformed governance, a new constitution and the fight against terrorism.

At the last round in December, the Syrian government delegation objected to the opposition’s tough line on the future of Assad, and those talks achieved nothing.