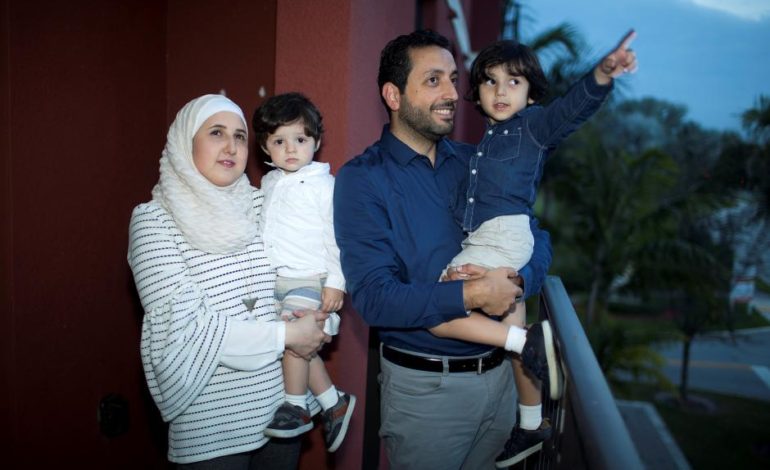 Temporary Protected Status (TPS) holders Mohammad Alala his wife Dania, both from Syria and their two U.S. born children Taim and Amr pose for a picture on the balcony of their home in Miramar, Florida, U.S., January 24 - Reuters

They received a form of temporary protected status (TPS) extended to Syrians in the United States because of Syria’s civil war. After moving to Florida, Alala found work as an engineer and his wife, Dania Kassas, enrolled in graduate school.

Now, the couple’s ability to remain in the United States legally is uncertain. Their asylum claims are unresolved and TPS for Syrians will expire at the end of March unless the Department of Homeland Security decides to extend it.

The decision, due by Jan. 30, will affect some 6,000 Syrians. If their status is withdrawn, they could lose the ability to work in the United States and face possible deportation back to Syria, where the war rages into a seventh year.

President Trump’s administration has demonstrated deep skepticism toward TPS, a program established by Congress in 1990 to provide temporary reprieve for immigrants whose home countries face disaster or conflict.

Since Trump took office, DHS has announced an end to protections for immigrants from El Salvador, Haiti, Nicaragua and Sudan. It has extended the protection for South Sudanese and deferred a decision on Hondurans to later this  year.

Administration officials have criticized previous presidents for leaving the status in place long after the crises that prompted it were over.

A DHS spokesman told Reuters the administration has not made a decision on Syria’s TPS, which was put in place in 2012, the year after the war began.

CDC alerts parents and health providers of parechovirus, can cause severe illness in infants