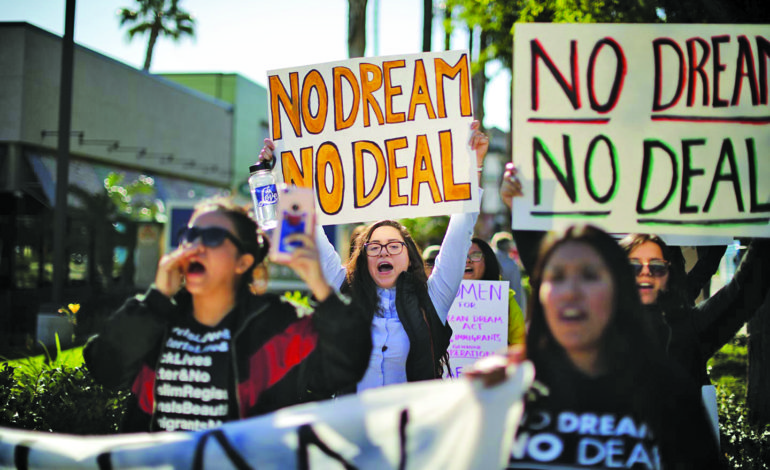 WASHINGTON, D.C. — President Trump is ready to sign on to a plan that would open a path to citizenship for as many as 1.8 million “Dreamers,” young immigrants brought illegally to the country as children, senior White House officials said on Thursday.

The White House presented the offer as a major concession aimed at attracting enough votes from Democrats. But it includes a number of elements such as tightening border security and deterring new immigrants to appeal to Republican hardliners.

“This is kind of a bottom line for the president,” a senior official told reporters, saying it would be up to lawmakers to determine some of the details. “If it’s realistic, then he’ll sign it. If it isn’t realistic, then he won’t sign it.”

Trump’s plan, which the White House hopes will be first voted on in the Senate in early February, would require Congress to set up a $25 billion “trust fund” to build a wall on the southern border with Mexico, and invest in better protections at the northern border with Canada.

It would also require Congress to limit family sponsorship of immigrants to spouses and minor children and end a visa lottery system for certain countries, the officials said.

Congress would have to allocate additional money to border guards and immigration judges, and change rules to allow for the rapid deportation of illegal immigrants from countries other than Mexico and Canada who arrive at the U.S. border, the officials said. To become law, the measures would also need to pass the House of Representatives. A second senior official declined to speculate on whether the plan would pass the Republican-controlled chamber.

Trump, whose hardline immigration stance was a key part of his 2016 presidential campaign, said in September he was ending the Deferred Action for Childhood Arrivals (DACA) program for Dreamers that was created by Democratic predecessor Barack Obama unless Congress came up with a new law.