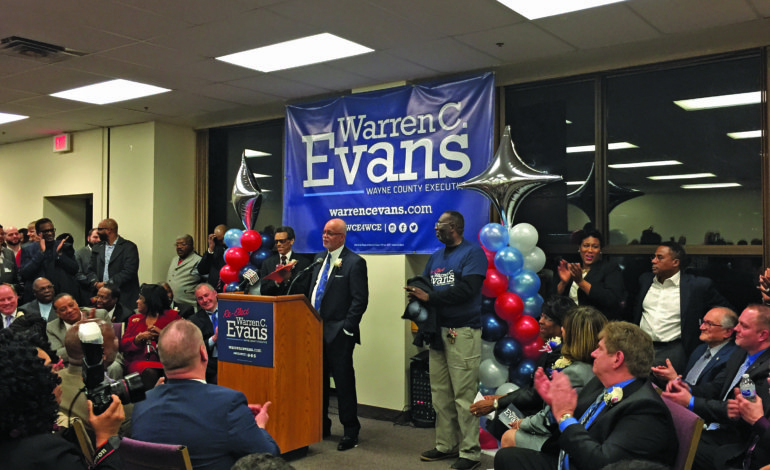 DETROIT — On Jan. 22, Wayne County Executive Warren C. Evans announced before a crowd of more than 100 supporters at the Samaritan Center on the city’s east side that he’d seek a second term.

“You find a way to make chicken pie out of chicken feathers,” Evans said about his first term. “That’s what we did, we took chicken feathers and three years later we kinda got a pie.”

Evans said he hopes to continue his work for the county and expand it over the next four years.

“Things are getting better financially,” he said. “We are getting to the point where we can expand services. We can do things that are fun to do, serve people. It’s nice to get out of the financial quagmire, but it’s much nicer to be able to provide services to your veterans and your citizens.”

Evans thanked his team and credited them with the accomplishments the county has achieved.

He said they could make more money elsewhere and that he appreciates their sacrifice. Evans said when he hired his staff, he took 5 percent of their pay away right away and they still haven’t gotten it back. He said that was due to a promise to union workers that until their wages return neither will his or his team’s.

“There are 43 communities in Wayne County and they are diverse in so many ways,” Evans said. “If you can’t find a place where you can live and be happy in Wayne County, I doubt that you could find it anywhere. It is a county; we all live or die with each other and we need to continue to look at the regional aspects of what we do.”

Hammoud told The AANews that Evans has assembled an outstanding team. He said Evans and his team have done a good job establishing inclusivity for the Arab American community.

“That sense of my voice is heard,” Hammoud said. “You can ask anybody in the Arab American community and I think they’ll say their voices are more heard now, just based on the teams he has built.”

Hammoud said he hopes Evans is able to push through a public transit deal.

“I am hoping public transit will makes its way to Wayne County in a more robust fashion,” he said.

Evans, a former Wayne County sheriff and Detroit Police chief, earned 68,471 votes when he won the race for county executive in 2014. Wild came in second with 40,436.

Since taking office, Evans has negotiated new, fiscally-responsible collective bargaining agreements with 12 of the 13 county unions and leveraged infrastructure investments in Livonia and Romulus to attract two new Amazon distribution facilities. In 2016, the administration invested $30 million toward 16 capital improvement projects on Wayne County’s roads and bridges, according to the County’s website. Some of Evans’ supporters among the local mayors also spoke during the event.

“I believe that with him we are a stronger city, a stronger state and definitely stronger county,” Wright said. “I want to thank you, Warren, for your sacrifices and working as hard as you have.”

“Many of you know I was part of a spirited campaign against Mr. Evans a few years ago,” Wild said. “There’s a few more people in the audience who were part of that race, too.”

Wild said he and Evans were friends prior to that race and had collaborated in the past.

“I can tell you that almost since day one, we have continued to collaborate in the city of Westland,” Wild said. “It’s been a very productive relationship. Right after Mr. Evans became county executive things really started to change in Wayne County.”

“Warren Evans knows what it takes to work together with the Wayne County Commission for the citizens of Wayne County,” Woronchak said. “And results, to just name a few, have included three straight budgets with a surplus, improved bond ratings and strategic investments and developments that have created thousands of jobs. That’s the sort of leadership that makes the future for our county bright and that’s why I’m proud to be one of his many partners in moving Wayne County forward.”

Duggan spoke about how much turmoil the County was in four years ago and about the assumption that the Wayne County executive would be superseded by a state-appointed emergency manager, as had happened in Detroit.

“Then a crazy thing happened,” Duggan said. “Warren Evans got elected, stories about federal investigations stopped, stories about lawsuits stopped and he got people together. They started to solve the deficit. They balanced the budget, the credit rating got upgraded. You never had any emergency manager. And now what everybody is talking about is Wayne County is one of the best run governments anywhere in the state.”

Duggan added that he looks forward to continue working with Evans over the next four years.