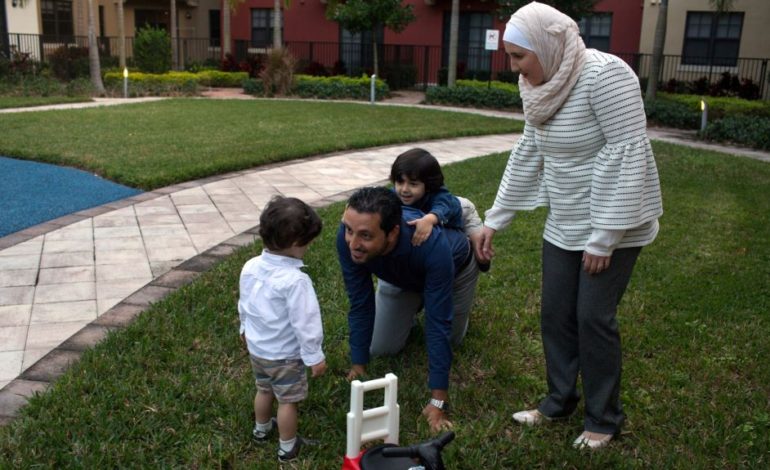 Temporary Protected Status (TPS) holders Mohammad Alala and his wife, Dania, both from Syria, and their two U.S.-born children, Taim and Amr play, at a playground at their home in Miramar, Florida, Jan. 24, 2018, Photo by: voanews.com

WASHINGTON, DC – Today, the U.S. Department of Homeland Security (DHS) took a decision to extend Temporary Protected Status (TPS) for approximately 7,000 Syrian beneficiaries residing in the U.S. Today’s decision only allows current TPS holders to renew their status and remain temporarily in the U.S. However, DHS refuse to re-designate Syria for TPS.

By not re-designating TPS for Syria, Syrians fleeing violence and persecution will not be able to apply for protection. This will have a devastating impact on Syrian nationals who have sought safe haven in the United States since 2016. Moreover, it will undermine family reunification for an estimated 2,000 Syrian nationals in the U.S., according to the American-Arab Anti-Discrimination Committee in Washington, DC (ADC).

TPS allows nationals from designated countries facing humanitarian disasters and/or domestic strife to legally stay in the U.S. TPS does not confer a path to permanent residency, but, rather, provides a safe haven until beneficiaries can return to their homes without harm.

Since it does not lead to permanent residency or citizenship, TPS beneficiaries who lose the status are subject to deportation — in this case, back to Syria, where civil war rages into a seventh year.

In 2016, the last time TPS was re-designated for Syria, U.S. Citizenship and Immigration Services cited the continuing armed conflict, which meant that “the return of Syrian nationals to Syria would pose a serious threat to their personal safety.”
Syria is one of the more recent additions to the list of TPS countries. The country was designated worthy of TPS in 2012, before the rise of ISIS violence.

More than 50 national security and foreign policy experts signed a letter last week, asking Department of Homeland Security Secretary Kirstjen Nielsen and Secretary of State Rex Tillerson to extend TPS for Syria. The signers argued that it is not just a humanitarian matter, but also one of national security.