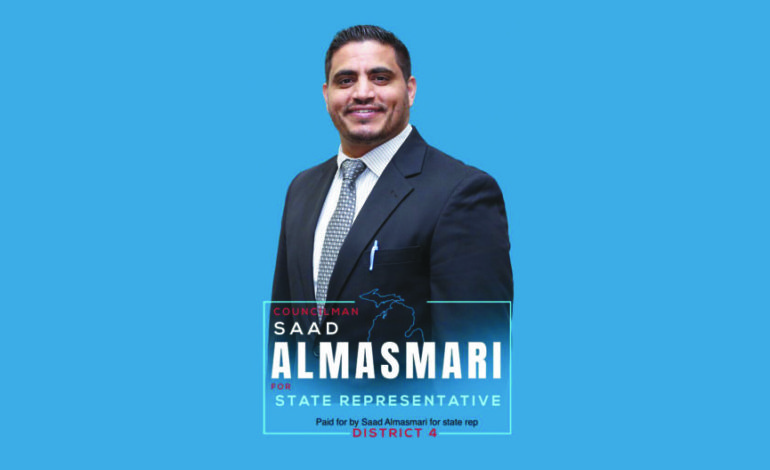 HAMTRAMCK — When Saad Almasmari made history in Nov. 2015 by receiving the most votes in the Hamtramck City Council race— making it the first City Council with a Muslim-majority in the U.S— he pledged to ensure proportional representation and that the city would handle resources well enough to move on from emergency management.

More than two years later, the 32-year-old Yemeni American businessman said he wants to serve his State House district with better results and wants the help of everyone with a stake in Detroit and Hamtramck to help him get there.

“Send me to Lansing to fight for the people,” he urged voters. “Elect me for better representation.”

Hamtramck is home to one of the largest concentration of Yemeni Americans, at 30 percent, in Metro Detroit and is also known for being one of the most ethnically and religiously diverse cities in the country. According to the 2010 Census, 41 percent of the city’s 22,000 residents are foreign-born.

In addition to the Yemeni community, Hamtramck is also home to large populations of Bangladeshis, Poles and African Americans.

About 65 percent of residents in House District Four, which includes parts of Detroit and Hamtramck, are Muslims, according to Almasmari. Non-Whites contribute to about 40 percent of the district’s economy, he added.

Amid the Trump administration’s intensified crackdown on immigrant communities and placement of Yemen on the travel ban, Almasmari said he would be persistent voice for “the people who built this country” in Lansing.

However, it’s Robinson’s “disappointing” and absent leadership over the last four years while major events were unfolding that drove Almasmari to seek her seat.

In 2013, Gov. Snyder appointed Cathy Square as Hamtramck’s emergency manager. A year later, the state announced the financial emergency was resolved and Hamtramck would be placed under the guidance of a transition board. This committee, called the Receivership Transition Advisory Board (RTAB), manages the city’s financials and approves funding for projects like repairing roads.

In 2016, Almasmari said the city’s budget came out with a $3.8 million surplus and is no longer under fiscal hardships to require RTAB management.

“It is just locking us up,” he said, adding that he would work to free up resources to improve quality of life in the city.

Almasmari said Robinson did not engage anyone on the issue and did not respond to a message asking for assistance to resolve it.

“There’s a lack of cooperation between the city and the state,” he said.

Just like neighboring cities, Hamtramck residents suffer from high auto insurance rates, increasing the likelihood drivers are ticketed and towed for not having coverage.

The councilman said he receives at about two calls a week from uninsured drivers complaining about added financial burdens from court costs and that he wants to be part of the discussion to lower insurance rates.

He said Robinson has been hesitant to engage the Council and the community on the matter and has expressed concerns that insurance companies would opt out of doing business in Hamtramck.

Recently, the father of a Hamtramck family complained to the Council that officers made him, his pregnant wife and his three young children walk home in the cold after they towed his car following a traffic stop on Jan. 3 for having an expired tag and no insurance.

Almasmari said that he, along with residents, would like the police department to improve efforts in fighting crime, instead of harassing drivers.

Hamtramck currently employs only 13 police officers compared to 36 firefighters, and only two police cars patrol the city at any given time.

Almasmari said he wants the department to take complaints more seriously and for dispatched officers to understand cultural nuances when dealing with residents.

“People feel they are not welcome to live in Hamtramck when the police stop them,” he said.

Almasmari said to bridge the gap between the large percentage of immigrant and underprivileged constituents and legislators, representatives should be more transparent and engage with residents on a regular basis and educate them about policies enacted in their communities.

He said he’s already doing that and has forged close relationships with local non-profit organizations and speaks to congregants at mosques and churches about specific issues concerning them and on the importance of voting.

Almasmari, who is majoring in business administration at Wayne State University, is also a small business owner. He opened King’s Ice Cream in 2011 and supplies Metro Detroit with more than 70 ice cream trucks.

Born 1986, Almasmari graduated high school in a small village in Yemen. He received a bachelor of arts in media from Sana’a University and married in 2007. He immigrated to the U.S. in 2009 and became a citizen in 2012.

He’ll hold his first campaign fundraiser on Sunday, February 11 from 2 to 5 p.m. at  2112 Holbrook Ave. in Hamtramck.