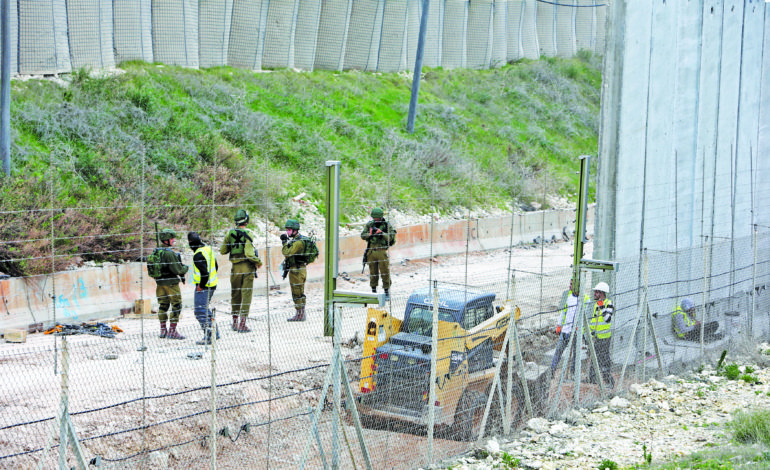 Israeli workers are seen building a wall near the border with Israel near the village of Naqoura, Lebanon, Feb. 8/ REUTERS

BEIRUT — A U.S. envoy has assured Lebanon that Israel does not seek an escalation between the countries following a surge in hostile rhetoric, Lebanese and Israeli officials said on Thursday.

Lebanon and Israel have exchanged threats and condemnation over a border wall being built by Israel, a tender issued by Beirut for oil and gas exploration in disputed waters and arms flows to Lebanon’s Iran-backed Hezbollah group.

Lebanese and Israeli officials said David Satterfield, acting assistant U.S. secretary of state, was in Israel last week and in Lebanon this week on a mediation mission. U.S. officials confirmed his travels without detailing his agenda.

“Satterfield held talks regarding the border wall with Israel and said there is no call for concern, and there is no direction toward escalation,” a senior Lebanese government official told Reuters on condition of anonymity.

“He assured the Lebanese that Israel does not want escalation.”

An Israeli official, who also declined to be named, said Satterfield was “relaying messages” to Beirut about several matters of contention.

“Our position has always been that we do not want to see the situation inflamed,” the official said, adding that at least two European countries were mediating, as well as the United States.

Lebanon: The Israeli wall an act of aggression

Lebanon has described Israel’s border wall as an “aggression”, saying it intrudes into Lebanese territory. Israel says the wall will be entirely on its side of the U.N.-recognized border.

The wall is being built near the U.N.-designated Blue Line between the two countries, which demarcated Israel’s withdrawal from southern Lebanon in 2000. Lebanon has reservations about the location of the line in 13 areas.

The United Nations Interim Force in Lebanon said the construction work was on the Israeli side. “Our troops are on the ground and the situation is calm,” UNIFIL spokesman Andrea Tenenti said.

Lebanese President Michel Aoun said talks were under way with friendly states “to prevent Israeli greed” and pledged to “confront any attack” on Lebanon’s territory or waters, his office said.

Lebanese leaders have accused Israel of threatening the stability of the border region. “This wall, if it is built, will be considered an assault on Lebanese land,” the secretary-general of Lebanon’s Higher Defense Council said in a statement after a meeting of senior government and military officials.

The council “has given its instructions to confront this aggression to prevent Israel from building (the wall) on Lebanese territory,” it said, without elaborating.

In a televised address last month, Hezbollah’s leader cautioned Israel to take the Lebanese government’s warnings over the wall “with utmost seriousness.”

“Lebanon will be united behind the state and the army to prevent the Israeli enemy (violating Lebanese territory),” Sayyed Hassan Nasrallah said. Hezbollah will “fully handle its responsibility in this regard,” he added.

Israel has condemned Lebanon’s oil and gas exploration tender as “very provocative”, saying that one field, known as Block 9, juts into its waters. Lebanon says the block is entirely inside Lebanese waters.

Lebanon has an unresolved maritime border dispute with Israel over a triangular area of sea of around 860 sq km (330 square miles) that extends along the edge of three of five offshore energy blocks Lebanon put to tender early last year.

On Friday, Lebanon expects to sign its first exploration and production contracts for two of the offshore blocks with a consortium of France’s Total, Italy’s Eni and Russia’s Novatek.

Israel attacked Lebanon in the summer of 2006 and fought with Hezbollah forces for 33 days. Israel claims that Hezbollah has increased in strength since helping sway the Syrian civil war in President Bashar al-Assad’s favor.

Israeli and U.S. officials have said they believe Iran is setting up factories in Lebanon to make precision-guided missiles that may allow Hezbollah to threaten Israel’s critical infrastructure in any future war. Israeli officials have hinted they could order preemptive strikes on such facilities.

Hezbollah and Iran have not responded to the missile allegations.

Satterfield is a former U.S. ambassador to Beirut and former head of the international peacekeeping force in Egypt’s Sinai desert, a role that put him in touch with Israeli officials.

Asked about Satterfield’s Lebanon visit, the spokeswoman for the U.S. Embassy in Beirut said only that he came “to meet with government officials to discuss the U.S.-Lebanon bilateral relationship.”

His Beirut trip followed a visit to Tel Aviv last week to address a security conference. Israeli officials and the U.S. Embassy in Israel declined to provide details on his talks with the Israeli government. γ