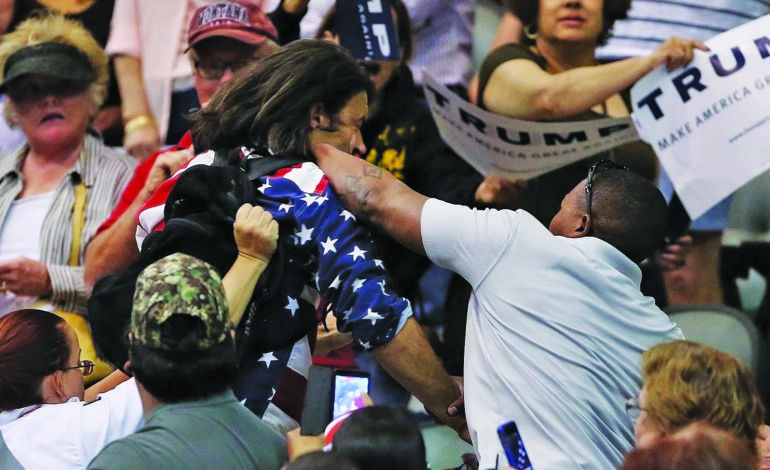 A protester clashes with Trump supporters during a rally for the Republican presumptive nominee in Albuquerque, New Mexico, on May 24, 2016/ REUTERS

Have you already made up your mind about how you’re going to vote — at least by party — in this year’s important elections? I hope not.

Because to serve our nation well at this troubled time in its political history, you should be looking for certain qualities in the politicians you favor. Ideology, party affiliation, positions on key issues — these are important considerations, but this year demands more from us as voters.

To explain why, I need to spend a little time talking about the current political environment. It is the most agitated I’ve seen in decades. The electorate is badly divided; the parties are split internally and vis-à-vis one another; the national mood is sour; our democratic institutions are unproductive; and our political leaders cannot seem to cooperate with one another, much less engage substantively on the crucial issues we face as a nation. Not surprisingly, politicians face a restive, discontented electorate.

This year’s dynamics don’t bode well for improvement. Republicans have staked their claim to votes on tax cuts, abandoning more traditional concerns such as the deficit and the national debt. Even though they control the government, they’re having trouble getting many things done. Democrats, meanwhile, are moving leftward, and hoping for a November backlash against President Trump.

In general, momentum in both parties seems to be moving toward the extremes, fueling a political debate that rejects the middle ground. This is discouraging.

At the national level the parties seem more interested in their opponents’ unconditional surrender than in carrying on a debate that enlightens voters and attempts to sway opinion. One wonders whether we can ever find the will to negotiate and compromise on difficult issues. Yet we have no choice if we’re to move forward as a large and diverse nation.

Which is why I believe we face a huge responsibility as citizens this year. We may each be certain in our own biases and policy and party preferences, but it is time to step back and ask how we revive the system at a time when people are so discouraged by politics, our institutions and our politicians.

And the answer, I believe, is that we have to look for politicians who want to build consensus, act constructively and instill a sense — both in their colleagues and among ordinary voters — that we’re all in this together. We need leaders who can rise above the polarization and divisiveness that current politicians have done so much to exacerbate and instead begin focusing on cooperation, collective purpose and the common good.

Our institutions are badly in need of repair. Making them work better, which is urgent, will not happen with scorched-earth politicking. It can only come from political leaders who embrace bipartisanship and the traditional values of democracy: Pluralism, free speech and tolerance for opposing points of view.

We want to find politicians who respect and look for the facts, not simply the facts as they wish them to be. We need to examine candidates’ rhetoric with great care and understand that it’s easy to state a problem and then lapse into meaningless generalities when it comes to solutions.

By contrast, it’s hard — but vitally important in this climate — to speak with clarity and thoughtfulness not just about what needs to be done, but about how to help make it happen. Politicians who are blatantly unrealistic as they pander to voters’ prejudices — “I’ll balance the budget in three years!” I heard one say the other day without telling us how — do not deserve our attention.

Instead, we should be looking for politicians who can move us beyond our current paralysis; who are open to different opinions and ideas; will work hard to bring together people of different points of view and who seek opportunities to discuss public issues forthrightly rather than dodge them; who prefer to answer hard questions, rather than just give a big speech and then leave the room.

Here’s the bottom line: Citizens today carry an extra burden — not merely to pick a politician we might favor for some reason, but to make choices that move us away from ideology and our own biases and toward getting this country running again.