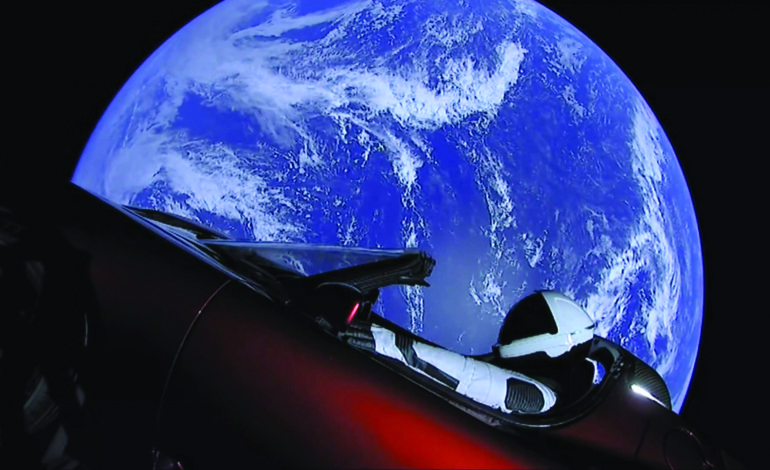 The 23-story-tall jumbo rocket, carrying a cherry red Tesla Roadster from the assembly line of Musk’s electric car company as a mock payload, thundered off its launchpad in billowing clouds of steam and rocket exhaust at 3:45 p.m from the Kennedy Space Center in Cape Canaveral, where moon missions once began.

Within three minutes, the Falcon Heavy’s two side boosters separated from the central rocket in one of the most critical points of the flight.

Then, capitalizing on cost-cutting reusable rocket technology pioneered by SpaceX, the two boosters flew themselves back to Earth for safe simultaneous touchdowns on twin landing pads at Cape Canaveral Air Force Station, about eight minutes after launch.

The successful liftoff was a key turning point for Musk’s privately owned Space Exploration Technologies, which stands to gain a new edge over the handful of rivals vying for lucrative contracts with NASA, satellite companies and the U.S. military.

Going along for the ride in a bit of playful cross-promotional space theater was the sleek, red, electric-powered sports car from Musk’s other transportation enterprise, Tesla Inc.

Adding to the whimsy, SpaceX planted a space-suited mannequin in the driver’s seat of the convertible Tesla Roadster.

The launch sent the Tesla Roadster into its planned trajectory.

“Exceeded Mars orbit and kept going to the Asteroid Belt,” he tweeted.

Musk said he hoped Tuesday’s achievement would encourage a new “space race” by private ventures and other countries, an allusion to the 1960s Cold War contest between the United States and the Soviet Union.