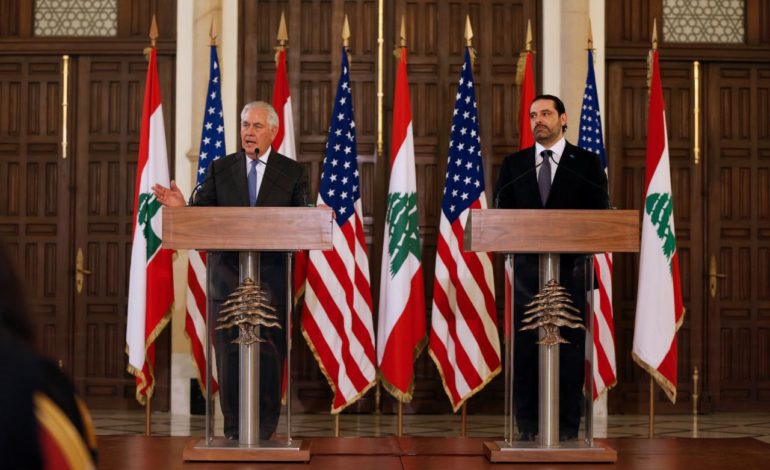 Speaking alongside Lebanese Prime Minister Saad al-Hariri in a Beirut news conference, Tillerson also said the United States was engaging with Lebanon and Israel to ensure their border remained calm.

Israel regards Hezbollah as the biggest direct threat on its borders and has repeatedly struck it in Syria, where the group is fighting alongside President Bashar al-Assad in a civil war now entering its eighth year.

“Hezbollah is not just a concern for the United States. The people of Lebanon should also be concerned about how Hezbollah’s actions and its growing arsenal bring unwanted and unhelpful scrutiny on Lebanon,” Tillerson said.

“Hebollah’s entanglement in regional conflicts threatens the security of Lebanon,” he added during his visit, the first by a U.S. Secretary of State to Lebanon since 2014.

Israeli-Lebanese tensions have spiked in recent months because of Israeli plans to build a wall at the border, and because of Lebanon’s decision to begin exploring for oil and gas in an offshore block in disputed waters.

Hezbollah, which the United States deems a terrorist organization, has increased its military strength since the last major conflict with Israel in 2006.

Tillerson urged Lebanese leaders to uphold the country’s commitment to staying out of regional conflicts, a reference to Hezbollah’s role in wars around the Middle East including in Syria.

Israel has accused Iran of seeking to set up weapons factories in Lebanon, and the Israeli military last month said the country had turned into one “large missile factory”.

When asked about the maritime border dispute with Israel, including Lebanese media reports that Washington had asked Beirut to give up a portion of sea it claims, Tillerson denied the reports.

“We will continue to be very engaged with both parties. We’ve asked no one to give up anything, rather we are looking for a solution,” he said. “We are engaging the governments of both Lebanon and Israel to ensure Lebanon’s southern border remains calm.”

President Michel Aoun told Tillerson on Thursday that Lebanon was committed to preserving calm on its southern border and urged Washington to play an “effective role” to help resolve Beirut’s land and maritime disputes with Israel.

Aoun urged the United States to “work on preventing Israel from continuing its assaults on Lebanese sovereignty” by land and sea, a statement from the presidency said. He said Lebanon was sticking by its internationally recognized borders, and rejected Israeli claims over a disputed maritime zone.