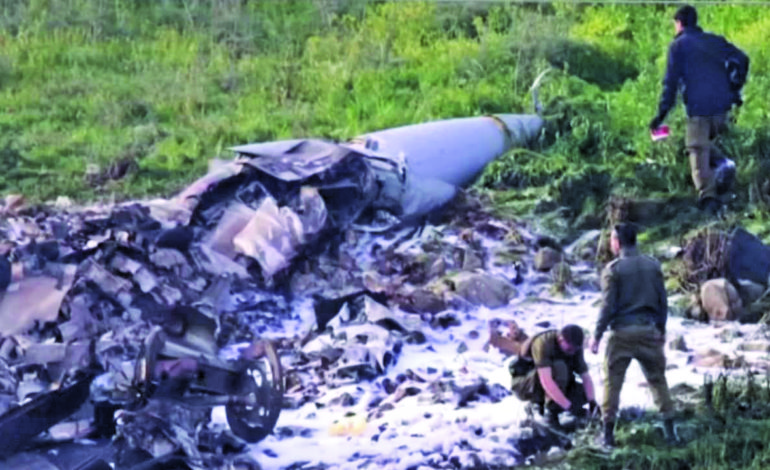 Israeli security forces examine the remains of an F-16 Israeli warplane near the Israeli village of Harduf, Feb. 10 - Photo by Reuters

DAMASCUS — Israel will face “more surprises” should it again attack Syrian territory, Damascus said on Tuesday, after Syria’s air defenses shot down an advanced Israeli warplane during the fiercest flare-up between the old foes in 36 years.

The F-16 jet was hit over northern Israel on Saturday as it returned from a raid on a Syrian position blamed for launching an Iranian-made drone across the border. Iran is supporting President Bashar al-Assad in Syria’s near seven-year civil war.

“Have full confidence the aggressor will be greatly surprised, because it thought this war – this war of attrition Syria has been exposed to for years – had made it incapable of confronting attacks,” Assistant Foreign Minister Ayman Sussan said.

“God willing, they will see more surprises whenever they try to attack Syria,” Sussan said during a Damascus news conference.

In a new development, on Wednesday, the Syrian government said their air defenses repelled Israeli surveillance planes that breached their southern border.

Israel has not commented on the reports.

The downed F-16 was the first warplane Israel has lost to Arab fire since its 1982 Lebanon war. Its two-man crew survived, with injuries, after bailing out of the stricken jet.

Syria and Hezbollah celebrated the F-16 shoot-down as a blow to Israeli military superiority.