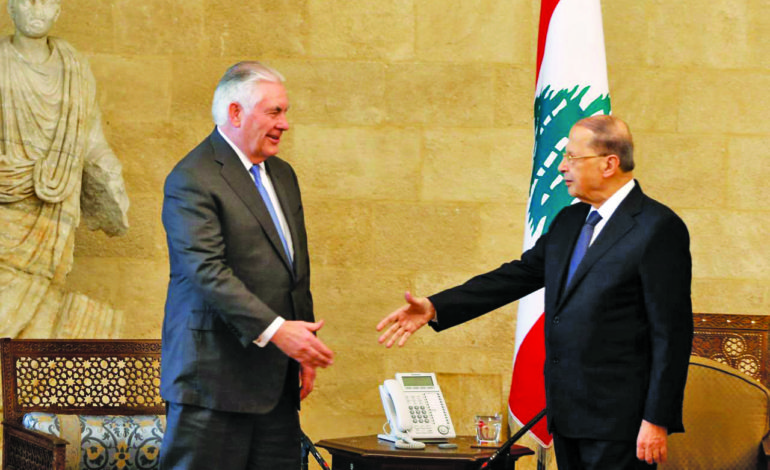 Speaking alongside Lebanese Prime Minister Saad al-Hariri in a Beirut news conference, Tillerson also said the United States was engaging with Lebanon and Israel to ensure their border remained calm. Israel regards Hezbollah as the biggest direct threat on its borders and has repeatedly struck it in Syria, where the powerful group is fighting alongside the Syrian government of President Bashar al-Assad in a civil war now entering its eighth year.

Hezbollah forced Israel’s army out of Lebanon on May 25, 2000 after almost two decades of occupation of Lebanese territory in the south of the country, and it was successful in preventing Israel from achieving its objectives in the 33 days war of summer 2006.

In an effort by the U.S. to escalate pressure on Hezbollah, the Trump administration has taken a hardline position and has sanctioned several people and entities associated with Hezbollah in recent weeks as part of an effort to increase pressure on Iran. The group has repeatedly warned the U.S. that its actions are fruitless and won’t impact their effort to secure the integrity and safety of their country and its resources.

Hezbollah is part of the Lebanese coalition government led by Prime Minister Saad Hariri, under a complex political system based on sectarian power sharing.

Tillerson says Hezbollah’s role is a threat to Lebanon

“Hezbollah is not just a concern for the United States,” Tillerson said. “The people of Lebanon should also be concerned about how Hezbollah’s actions and its growing arsenal bring unwanted and unhelpful scrutiny on Lebanon.”

However, the facts on the ground and on the borders shows completely different scenarios than the one is portrayed by Tillerson. Since 2006 the Israeli–Lebanese border has been fairly quiet, with no major hostilities, and that is due to the balance of power that Hezbollah has been able to achieve, which served as a deterrence to Israeli military adventures into Lebanon for a record of more than a decade. In fact, the Lebanese people—  especially those who live in the southern region of Lebanon, which borders Israel, and have suffered under Israeli occupation for decades— feel very secure and confident with Hezbollah on guard, contrary to what Tillerson is preaching in their capital. Tillerson with Berri during his five-hour visit to Lebanon

In his meeting with Parliament Speaker Nabih Berri, another ally of Hezbollah, Tillerson spoke against the growing arsenal of the group with an emphasis on U.S. efforts to dry its financial resources. Berri told Tillerson that Hezbollah is a resistance force defending the country. He asked what the reaction of the American people would be if invaders occupied their land. Would they welcome them or fight back? After laying out a long list of Israeli aggressions against Lebanon, Berri told Tillerson that Lebanon can no longer accept Israeli assaults on its land and resources.

“Hezbollah’s entanglement in regional conflicts threatens the security of Lebanon,” Tillerson told a pool of reporters at the press conference with Hariri.

Hezbollah military involvement in Syria is seen by most Lebanese as instrumental in fighting ISIS extremists and defeating them before they enter the country and wreak havoc like they did in neighboring Iraq and Syria. Lebanon was spared the destruction and killing due to Hezbollah’s active involvement in the fight against ISIS outside its borders.

Hezbollah has always rejected any demand that it give up its weapons, which it says are necessary to defend Lebanon against Israel. It has said its role in Syria is needed to stop the threat of militant extremists from reaching Lebanon.

Tillerson alone for five minutes while waiting to meet Aoun Tillerson at the presidential palace in Baabda waiting for President Aoun

Tillerson’s visit, the first by a U.S. secretary of state to Lebanon since 2014, got off to an awkward start as he waited five minutes in Baabda Palace for his meeting with President Michel Aoun, a Hezbollah ally.

The Lebanese president’s office denied any departure from diplomatic protocol and said Tillerson had arrived a few minutes early. Footage of him waiting aired on some Arabic TV channels throughout the day. Aoun later said Tillerson had listened and understood the Lebanese position regarding the Israeli border.

Aoun told Tillerson that Lebanon was committed to preserving calm on its southern border and urged Washington to play an “effective role” to help resolve Beirut’s land and maritime disputes with Israel.

He urged the United States to “work on preventing Israel from continuing its assaults on Lebanese sovereignty” by land and sea, a statement from the presidency said. Aoun said Lebanon was sticking by its internationally recognized borders and rejected Israeli claims over a disputed maritime zone.

Israeli-Lebanese tensions have spiked in recent months because of Israeli plans to build a wall at the border and because of Lebanon’s decision to begin exploring for oil and gas in an offshore block which Israel considers a disputed waters.

Hezbollah, which the United States deems a terrorist organization, has increased its military strength since the last major conflict with Israel in 2006. Tillerson during a joint news conference with Lebanese Prime Minister Saad al-Hariri at the governmental palace in Beirut, Feb. 15

Tillerson urged Lebanese leaders to uphold the country’s commitment to staying out of regional conflicts.

Israel has accused Iran of seeking to set up weapons factories in Lebanon, and the Israeli military said last month the country had turned into one “large missile factory.”

When asked about the maritime border dispute with Israel, including Lebanese media reports that Washington had asked Beirut to give up a portion of sea it claims, Tillerson denied the reports.

“We will continue to be very engaged with both parties,” he said. “We’ve asked no one to give up anything, rather we are looking for a solution. We are engaging the governments of both Lebanon and Israel to ensure Lebanon’s southern border remains calm.”