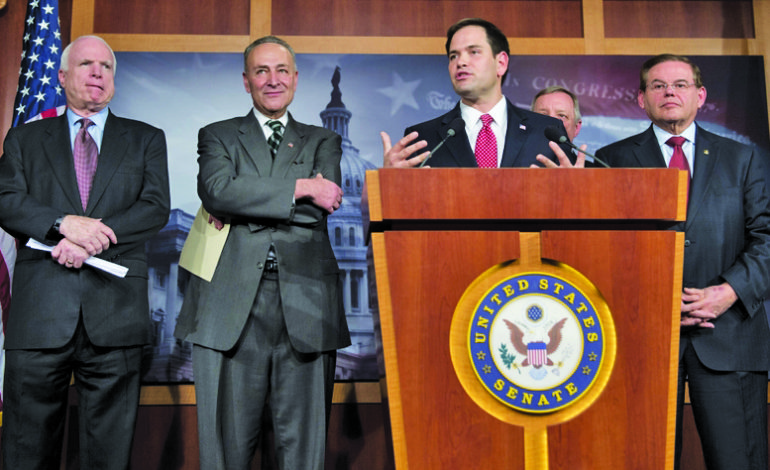 The only times that Congress will attend to international matters is when there is, at stake, a domestic political advantage in appeasing supporters or striking out at rivals.

Domestic American politics have become so cripplingly partisan that Congress can’t pass a long-term spending bill or deal with critical issues like immigration reform, comprehensive health care reform, or provide the massive funding needed to repair our crumbling infrastructure. Due to this deep and bitter divide—fueled, in part, by the president’s inflammatory tweets; the harsh and inflammatory rhetoric from pundits and the media’s penchant to create feeding frenzies over “gotcha” scandalous news stories—Washington has turned decidedly inward and disturbingly dysfunctional.

Focused more on fighting for the sake of fighting and scoring points against political opponents, too little attention is paid to America’s role in the rest of the world. The only times that Congress will attend to international matters is when there is, at stake, a domestic political advantage in appeasing supporters or striking out at rivals. As a result, there will be Congressional debates on punishing groups that support boycotting Israel, imposing sanctions on Iran or Russia, Russia’s meddling in our elections or building a wall between the U.S. and Mexico. But scant attention is given to addressing the U.S. role in critical conflict areas from Somalia and Yemen, to Syria, Iraq and Afghanistan.

This reality came into sharp focus, a few days back, at an event hosted by my institute. It was our 20th annual Congressional dinner. This has long been one of my favorite affairs since it’s a small gathering that brings together the Arab American Members of Congress, the Arab Ambassadors to the U.S., and a select number of members of our board, many of whom have rich political experience.

It is, by design, an intimate, private and off-the-record dinner providing the attendees with an opportunity to “let down their hair” and have a frank and open conversation about critical issues facing the U.S.-Arab relationship.

This year’s dinner discussion, however, was different and the difference was illustrative of the serious problems plaguing American politics and the impact that this is having on the ability of our country to meaningfully engage in the world.

Despite the presence of some Arab ambassadors whose countries are facing serious internal and regional challenges and whose situations are directly impacted by U.S. policies, and despite the eloquent presentations made by these ambassadors, our discussions kept returning to our dysfunctional partisan divide.

To their credit, our Congressional representatives and other participants, some of whom were senior political figures with long and distinguished careers in both the Democratic and Republican parties, never descended into rancor or finger-pointing. The concerns they raised were heartfelt and thoughtful. They lamented the demise of the political parties, which one participant described as once having played the role of mediating institutions that engaged and provided meaningful access to their members, but now served mainly as fundraising vehicles. The once important role played by the parties had now been eclipsed by billionaire donors and their well-funded agenda-driven political action committees. Our participants also decried the transformation of cable television from conveyors of news into partisan entertainment vehicles that, instead of informing the public, now served to inflame and polarize political discourse. And they expressed growing concern with the inability of Congress and some political leaders to engage in civil and productive discourse, making it increasingly impossible to reach compromise on critical issues facing the nation.

The discussion was thoughtful and quite instructive, but despite repeated efforts to refocus participants on the U.S. role in the Arab World, we kept drifting back to our preoccupation with our politics at home. And so, issues—like the needs of Syrian refugees and the destabilizing impact they are having on host countries; the humanitarian crisis in Yemen; the deteriorating situation in the occupied Palestinian lands; and the potential for an expanding US military role in Syria, without a strategic vision—received too little attention.

I left the dinner feeling that it had been a reflection of our national dilemma in microcosm. Our hyper-partisan dysfunction has caused America to turn inward and, as a result, Congress has abdicated its oversight role and our political leaders have left the American public uninformed about the dangers afoot in the world and unprepared to deal with the challenges we face in countries in which we are deeply engaged. And that’s a recipe for disaster.