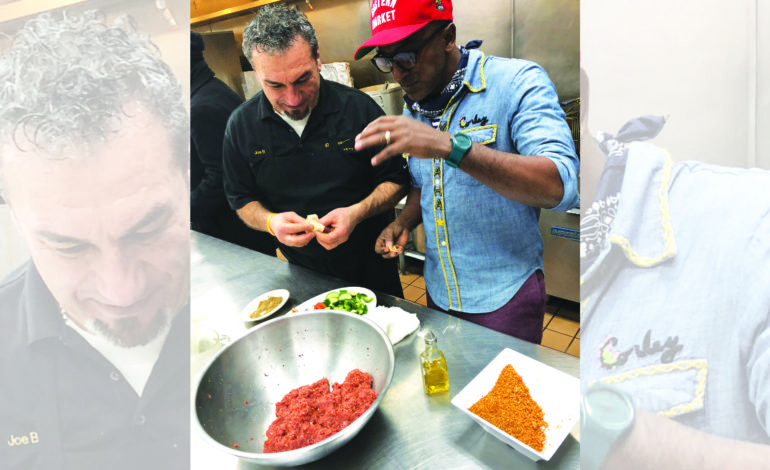 DEARBORN — Metro Detroit’s Arab American community will be on display this summer with the launch of a new series on PBS called “No Passport Required”, hosted by The Food Network’s chef Marcus Samuelsson.

The series is slated for six one-hour episodes that follow Samuelsson as he explores communities that reveal the best global cuisine hidden in America’s backyards — from the Arab American community in Detroit, the Vietnamese American residents in New Orleans, the Russian community in Seattle, Chicago’s Mexican population to the Ethiopian neighborhood in Washington, D.C. and the Haitian community in Miami.

Samuelsson, born in Ethiopia and raised in Sweden before moving to the U.S., owns the Red Rooster Harlem restaurant in New York. The show is a joint project by Eater, an online magazine, and PBS and is being produced by Vox Media, Eater’s parent company. It’s Eater’s first expansion into network television programming.

“Chasing flavors has been my lifelong passion,” Samuelsson said in a statement. “To now be able to bring viewers on that journey with me to these amazing communities in cities across the U.S. is truly a dream come true. We get to go deep into the markets, pull up to the roadside stands and be welcomed into homes, all the places where people share and celebrate food together.”

The production team plans to visit Washington D.C.’s Little Ethiopia; Fremont, California’s Little Kabul with its large Afghan population and Louisiana’s Vietnamese shrimpers. The food, however, is only the icing on the cake.

Samuelsson recently visited Metro Detroit, where a high concentration of Arab Americans reside, for six days. He dined at local restaurants, spent time in dozens of families’ kitchens, attended a wedding, explored the area’s Iraqi and Chaldean communities during a talk with an Iraqi photojournalist and toured the Arab American National Museum, the show’s segment producer, Jacqueline Lobel, told The AANews.

“No Passport Required” uses cuisine as a means to highlight varied and complex aspects of a culture, including how immigrant Americans have adapted, their impacts on making their cities unique and on American life.

“It was eye opening,” Lobel said. “But the story behind it and putting a face to many people is the most important thing.”

Joe Bazzi, owner of Byblos Banquet Hall and Catering, and his employees were featured in the show, guiding Samuelsson through the community. Byblos catered a recent Lebanese wedding.

Lobel said “No Passport Required” was grateful to be able to film there, as it encompassed many traditions— including music, traditional dancing and food— into one event.

She said it showed continuing traditions and the importance of family and how food is passed down from generation to generation.

“Even if has an American twist, it still has deep roots in the culture,” she said. Lobel said “No Passport Required” was not intended to be an overtly political show, but that it’s a timely one, amid a heated political climate.

Lobel said while the crew tours several immigrant communities, many found Dearborn to be unique in that it’s more tight-knit, making it easier for refugees here to transition into their new lives, compared to those in other cities.

“Being Arab American is not monolithic,”she added, explaining the struggles of filming. “It means so many things and being an Arab doesn’t mean you’re a Muslim or from one country. But there has been zero push back from the community and so many open doors.”

Although no air date has been set, Lobel said the show will debut sometime in July.

The story will continue through a nationwide series of events that bring the featured cuisines to audiences through exclusive behind-the-scenes digital content on Eater.com and PBS.org, and through local outreach by PBS member stations and Eater’s local city
platforms.