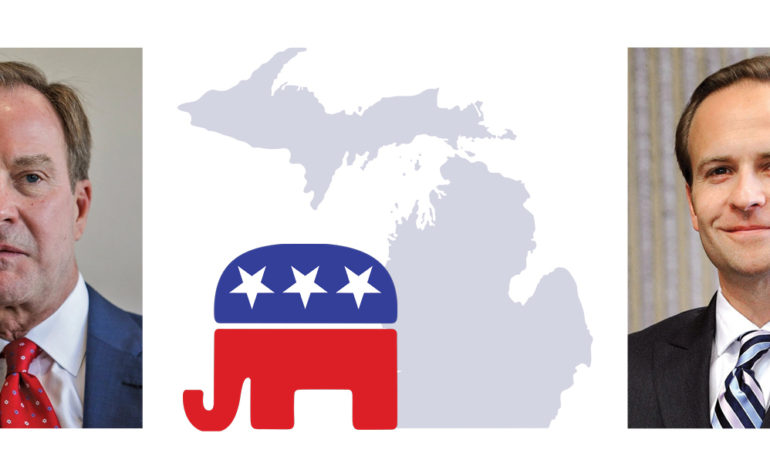 Bringing back jobs, improving the economy, education, immigration and infrastructure are some of the most prominent issues on Michigan voters’ minds this upcoming election season.

But while they lack in diversity, the three leading candidates make up for it in experience and commitment to their party’s policy positions.

Schuette, Calley and Colbeck are leading in polls and have secured significantly more campaign funds than the other candidates, in that order. Schuette, who is unable to run for reelection this fall because of term limits, has served as the state’s attorney general since 2011.

He is a former Michigan Court of Appeals judge, state senator, director of the Michigan Department of Agriculture and member of Congress.

He has pledged to cut state income taxes and bring more and better-paying jobs to Michiganians.

Schuette has also supported President Trump, who’d indicated his own support for Schuette in a tweet last September.

At a meeting with Arab American leaders during his campaign for attorney general, Schuette said he decided to run for the post because he was, “Sick and tired of the process in Lansing. Over 8,000 hardened criminals have been released under the policies of [Governor Jennifer] Granholm and there’s fewer police on the streets, you put those ingredients together and it jeopardizes Michigan families.”

The Attorney General’s office criminally charged six current and former state and Flint officials last June for their roles in that city’s water crisis. Excessive lead levels from deteriorating pipes was linked to an outbreak of Legionnaires’ disease that caused at least 12 deaths. Serving for two terms alongside Gov. Snyder, Lt. Gov. Brian Calley has poised himself as his boss’s de facto successor.

That relationship could be seen as disadvantageous among voters disappointed with Snyder’s sluggish actions in handling of the Flint water crisis, but Calley promises to continue on an already-set course toward prosperity for the state.

“The 2018 election will be decided on who has the best plan to bring Michigan to the next level,” he told reporters last November. “Not only have I been involved with passing massive and historic tax cuts, streamlining or eliminating regulations and working on a balanced budget that pays down the state’s debt, I also have a detailed plan for the future. And I’m the only candidate in the race who will go beyond sound bites.”

Calley worked in banking before starting his political career at the local level and was first elected to the legislature in 2006. He served two terms in the State House before being selected as Snyder’s running mate.

When he took office as lieutenant governor in 2011, he was 33-years-old— the youngest in the nation and second youngest in Michigan history. In that role, he has spearheaded issues like the personal property tax repeal and special education funding.

He has also worked with Gov. Snyder on corporate tax cuts and other policies he says have led to “an incredible Michigan comeback.”

In May 2016, Calley publicly endorsed Donald Trump, but retracted his support during the presidential election’s final stages.

In September 2016, Calley told The AANews that although Trump, “can be rough around the edges in the way he addresses things” as he maneuvers through his campaign, the first-time political candidate is going through a learning process and with time will better connect with people.

He added that he found Democratic candidate Hillary Clinton to be an “unacceptable alternative.”

Unlike the Democratic party, Calley said, Republican Party constituents tends to be more diverse in ideas and policy issues, explaining some Republicans’ willingness to vote for Trump. Sen. Colbeck has made a name for himself by being a staunch conservative in the State Senate and potentially being the antithesis to Snyder’s administration on social and spending issues.

Colbeck has sponsored nine bills that have become law that helped develop right-to-work legislation and paved the way for direct primary health care services in Michigan.
In 2013, he voted against expanding Medicaid health insurance eligibility under the Affordable Care Act. He has also voted against the $195 million Detroit “grand bargain” that helped the city emerge from bankruptcy in 2014, against higher taxes and registration fees to fund road repairs in 2015 and against a $617 million bailout of the Detroit Public Schools last year.

Colbeck was one of three state senators who voted against $128 million in supplemental funding to help Flint address its water contamination crisis. He voted for an initial $30 million in emergency funding, but later said he would prefer a solution that benefited all voters not just one community.

“Michigan has been and always will be a welcoming state for those escaping war and oppression,” he said in a statement. “But it is clear that the resettlement process for Syrian refugees is a pathway for terrorists to enter our country and the state. It is irresponsible to allow policies to remain in place that put our citizens in danger. The fact of the matter is, the center of gravity for ISIS is Syria. ISIS has repeatedly demonstrated hatred for America.”

Colbeck has served for seven years in the State Senate and holds bachelor’s and master’s degrees in aerospace engineering from the University of Michigan.

Hines, who worked for four years as a missionary in central Africa, running hospitals and urgent care centers, wants to improve Michigan’s job climate, protect the environment and improve infrastructure.

Lackie, who has owned two small businesses and served as a volunteer firefighter in Oxford Township, opposes common core education and sanctuary cities. He wants to lower insurance and prescription drug costs.

Space owns a Lansing-based window washing company and has served for eight years in the Michigan National Guard. He wants to focus on rebuilding Detroit since its emergence from bankruptcy, protecting Michigan jobs and public education, improving correction facilities and addressing the opioid epidemic. He advocates for the legalization of marijuana, which he would regulate like alcohol.

DeRose told the Detroit Free Press that he wants to implement pro-business policies, including elimination of the state’s 6 percent corporate income tax. He has a bachelor’s degree in business administration and a master’s degree in management, both from Aquinas College in Grand Rapids.

McFarlin ran for governor in 2014 for the U.S. Taxpayers Party and is also a former candidate for Bay County executive and Bay County sheriff. He ran for the state Senate as a Democrat in 2002. McFarlin told MLive in 2015 that he would “promote more open carry of guns, as it is a deterrent, as opposed to concealed.”

Other 2018 gubernatorial candidates include eight third-party candidates, including three representing the Libertarian Party and one for the Green Party.